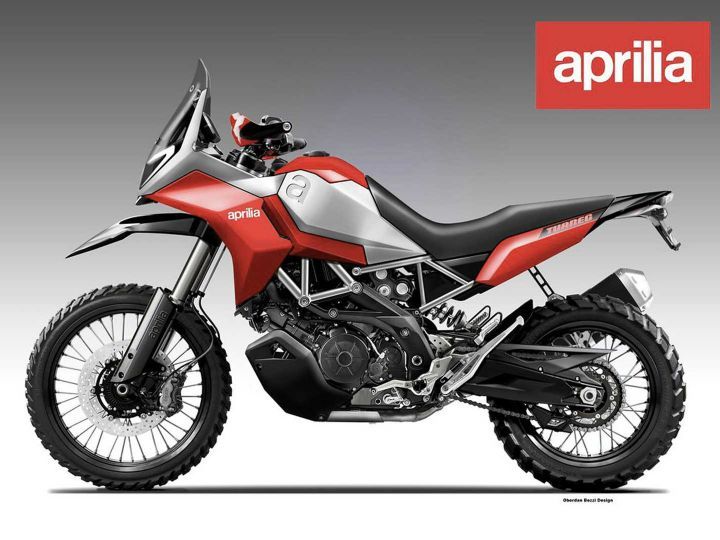 Italians have a knack of thinking quirky. Take Aprilia for example. It wanted the prime focus of its EICMA 2019 coverage to be on the RS 660 and the Tuono 660 Concept. However, the Noale-based manufacturer had another motorcycle on its stands which was easy to miss had it not been for our eagle-eyed friends at Powerdrift. Aprilia teased the possibility of seeing a new Tuareg 660 in the near future as the motorcycle was kept in a glass box and shrouded by bushes, shrubs and all sorts of wildlife.

Aprilia has made adventure motorcycles under the Tuareg brand name for years. Since it now wants to make the new 660cc parallel-twin available in as many segments as possible, the only way forward, after a supersport and a naked, is the adventure route. A lot of established European manufacturers have dipped their toes into the segment in the last few years. Norton did it with the Atlas 650 while Moto Guzzi produced the V 85 TT.

Given that Aprilia wanted to just give us a tease, there’s little we know about the Tuareg 660 at the moment. Firstly, it gets a tubular steel trellis frame, not a perimeter chassis like the RS 660 or the Tuono 660. This was bound to happen as the standard road-biased chassis of the other two motorcycles would not be capable of handling the stresses of an adventure setup. Plus, it was seen with a metal bash plate, hand guards and a dirt bike-inspired fairing.

As we said, the Tuareg 660 will have the 660cc parallel-twin motor from the RS 660. However, we expect Aprilia to tune this motor for better adventure capability. Hence, peak output might see a dip from 100PS to something that’s a bit more manageable on- as well as off-road.

More details regarding both the Tuono 660 Concept and the new Tuareg 660 are expected to be revealed at the Aprilia All Stars 2020 event. We could most likely see this bike as a 2021 model, with an India launch somewhere around mid-2021.