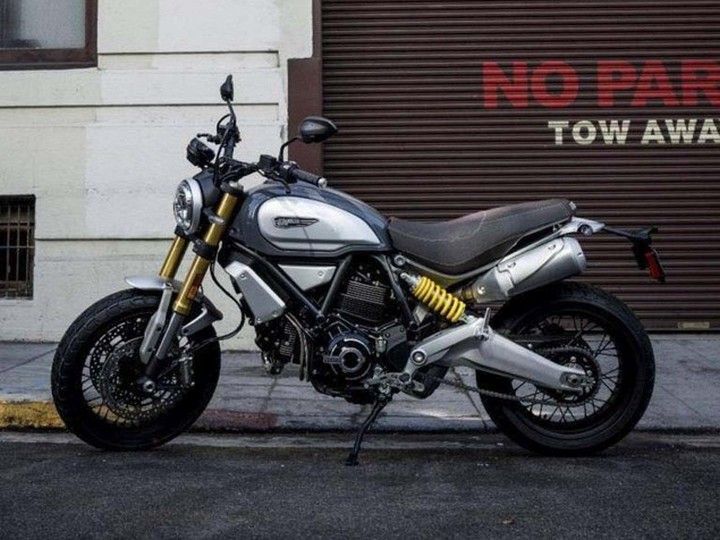 It was never a big secret that Ducati was hard at work, developing a bigger-engined Scrambler. It was supposed to be one of the five all-new bikes that the Bolognese manufacturer is slated to unveil at the 2017 EICMA. However, images of the bike leaked on the web just days before its official unveiling, but now, we finally have the real deal, and all the info to go with it.

There was no way this, ahem… monster of an engine was going to fit into the petite Scrambler’s engine housing as it is. So, the Scrambler 1100 features a new twin upper spar steel trellis frame, while the rear is completed by an aluminum subframe. Along with the twin underseat exhausts, it gives the whole bike the Monster-esque look. The steering head angle has been revised to a steep 24.5-degree for better agility around town, and is complemented by an aluminum double-sided swingarm. The footpegs, seat and handlebar have been lowered and moved forward too, thus giving the whole bike an entirely different and nimbler riding experience over the standard Scrambler. Seat height stands at a moderately low 810mm, while the fuel tank has a capacity of 15 litres.

In terms of electronics, the Scrambler 1100 gets four levels of traction control, Bosch Cornering ABS, and three riding modes: Active, Journey and City. Bringing it all to a halt are four-piston Brembo monobloc calipers squeezing 330mm discs up front, and a two-piston Brembo caliper at the rear squeezing a 245mm disc. Tyres are Pirelli MTs, 120-section 18-inchers at the front and 180-section 17-inchers at the rear.

Up front, the headlight is all-new, and features an LED ring around the rim that acts as a daytime running light. Out back, the Scrambler 1100 also uses LED tail lights. The instrument cluster is fully digital, and is reminiscent of the original 1970’s Scrambler.

The Special gets blacked-out spoked wheels, chrome exhausts, and aluminum front/rear mudguards. It gets a unique Custom Grey color as well as brushed-effect swingarm and adjustable front fork with gold-colored anodized sleeves. Rounding it all off is the low-slung tapered handlebars and a brown seat with dedicated lining. The Special is targeted at the hip urban custom scene.

On the other hand, the Sport is meant for those who enjoy high performance, hence its name. It gets high-performance Ohlins suspension at both ends and comes in Viper Black shade with yellow tank sides and dual yellow striping down the middle of the tank and mudguards. It also features aluminum wheels with machine-finished spokes, tapered handlebars and a seat with a dedicated lining.

Since the entire Ducati lineup is already present in India, it i highly possible that the Scrambler 1100 will soon make its way to our shores too. Pricing and other details are yet to be revealed, but expect it to be priced substantially higher than the most expensive Scrambler on sale right now, the Desert Sled. We are expecting something in the range of Rs 12 lakh. The 2018 Scrambler 1100 will play ball against the likes of the Street Scrambler and the larger-engined Bonnevilles from Triumph’s “modern classics” lineup.

Ducati also showed off a new colour option called “Shining Black” for the standard Scrambler Desert Sled. Featuring red, orange and yellow stripes on an ebony black paintjob, the new paintjob harks back to the 70’s era and is one of the best colour schemes we’ve seen so far on the wildly resurgent Scrambler lineup.

Click here to read about the other motorcycles that Ducati has unveiled at the 2017 Milan Motor Show: the Panigale V4 and V4 Speciale, the 959 Panigale Corse, and the Multistrada 1260 and 1260 Pikes Peak.