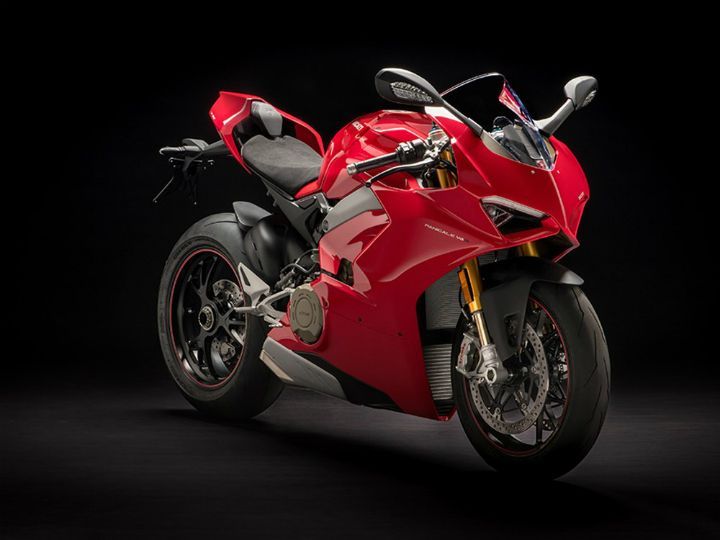 Ducati has done it! While traditionalists may not be happy, Ducati has ditched their traditional L-twin powerplant for a V4 setup for its flagship superbike. The Ducati Panigale V4 is the first production Ducati to employ a V4 motor. Until now Ducati’s V4 engines were the domain of its MotoGP lineup, with the exception of just one road-going limited edition special in the form of the Desmosedici RR which launched in 2007. The new Panigale V4 employs a 1103cc V4 engine called the Desmosedici Stradale. It is a powerful unit churning out 217PS at the crank and 120Nm of peak torque.
The Panigale V4 will be the replacement to the 1299 Panigale. Both bikes share the same chassis design and exhaust routing. The V4 motor sits further back in the chassis and is banked 42 degrees from vertical.

The most important benefit of this should be better handling and front-end feedback. The integrated aluminium airbox and single-sided swingarm make the bike lighter. Further, the "frameless" chassis design that's built directly off the motor makes it more compact and efficient in controlling vibrations.
To make it safer for the street, cornering ABS and Bosch's dynamic slide control will be standard on the bike. The slide control will allow for a more controlled drift while exiting corners. The updated quickshifter on the bike will identify riding conditions and adapt accordingly. This will allow easy clutchless gearshifts even when the bike is leaned over, making the process safer and effortless.

For suspension duties, it employs 43mm Showa Big Piston forks upfront and fully adjustable Sachs monoshock at the rear. It also gets a Sachs steering damper. The Panigale V4 is light at 174 kgs (dry), which is only 8kgs heavier than the 1299 Panigale that stood at 166kgs (dry). That's a surprisingly good number for a sports bike with a four-cylinder engine.
Ducati also unveiled a ‘Speciale’ edition of the Panigale V4. The Panigale V4 Speciale makes 229PS of power. The 12PS hike in power is courtesy of a Akrapovic titanium exhaust system.

The V4 Speciale also loses weight courtesy the above mentioned exhaust system and swapping aluminium parts for carbon fibre. The Panigale V4 Speciale also has a lighter lithium-ion battery and a cast magnesium subframe, compared to the standard which has an aluminium subframe. You also have the option of opting for magnesium wheels instead of the standard aluminium Marchesinis, which drops the kerb weight to 164 kgs, 10 kgs lighter than the standard bike. The limited edition Speciale comes with fully adjustable Ohlins electronic suspension at both ends, NIX-30 USD forks up front and TTX36 monoshock at the rear. Ohlins also gifts its steering damper with the suspension on the Speciale.
No further information is out on the price or availability yet but we expect the bike to make its way to India sometime next year. The bike will compete with the likes of the Aprilia RSV4, BMW S1000RR, Kawasaki Ninja ZX10RR, Suzuki GSX-R 1000R.

Click here to read about the other motorcycles that Ducati has unveiled at the 2017 Milan Motor Show: the 2017 Scrambler 1100