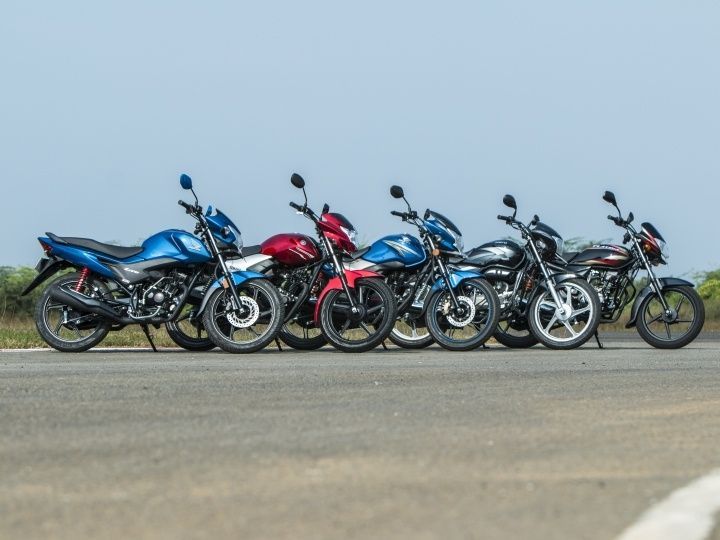 Bajaj’s most affordable bike in India, the new CT100 landed in the first quarter of 2015 as a replacement for the previous CT100 that did decent numbers but was discontinued in 2006, and the Boxer that came before it. Motive power comes from a 99.27cc engine which makes about 8.2PS of power at 7500rpm and 8.05Nm of torque at 4500rpm, mated to a four-speed constant mesh transmission. Bajaj claims the CT100 is good for a top speed of 90kmph and will also deliver 89.5kmpl, both pretty commendable figures even if they are to be taken with a pinch of salt as all manufacturer claims are.

But what is disappointing about the CT100 is that it doesn’t come with electric start as an option, not even on the allow-wheeled version. The first contender for our Bike of the year up to 125cc Award retails for Rs 35,034, while the alloy wheel version will set you back by Rs 38,034 (both ex-showroom Delhi).

Touted as the world’s most fuel efficient bike, the Bajaj Platina 100 ES comes riding on the shoulders of an ARAI certified fuel consumption figure of a whooping 96.9kmpl, thanks to its entirely new platform and new DTS-i engine. With refreshed styling, long travel telescopic front suspension and SNS (double spring) rear suspension, and the longest seat in the segment, the Platina 100 ES retails for Rs 43,241 (, kick-start only, ex-showroom Delhi) and is available in three colours: ebony black, electron blue and candy red.

Positioned as a premium 110cc motorcycle, the Honda Livo is the replacement for the Honda CB Twister. Powered by a single-cylinder, air-cooled engine that produces 8.36PS at 7,500rpm and 8.6Nm at 5,500rpm, the Livo also features the proprietary Honda Eco Technology (HET) that reportedly increases combustion efficiency, taking the claimed fuel efficiency figure to a nice 74kmpl. The Honda Livo will be available in two variants – drum and disc brake. The base variant of the Honda Livo has been priced at Rs 52,989 and the disc brake model carries a sticker price of Rs 55,489, pretty steep but understandable considering that Honda is positioning it as a premium commuter.

An updated version of the long in the tooth Splendor Pro, the new version is the top dog in the Splendor lineup, Hero’s bread and butter brand. Powering it is the tried and tested air-cooled, single Cylinder APDV engine that delivers maximum power of 8.36 Ps at 8,000 rpm and peak torque of 8Nm at 5,000 rpm. Hero has provided adjustable rear suspension and 18-inch wheels on the Splendor Pro for a comfortable ride quality. Also on the list of changes are a restyled instrument console with side stand indicator, and redesigned graphics. Available in four variants and two new colours – Shield Gold and Black Red – prices for the Hero Splendor Pro start at Rs 47,850 (ex-showroom, Delhi).

Yamaha Motor India introduced an all new range of its Saluto commuter bike, now armed with disc brakes at the front. Powertrain remains the same: a Blue Core technology four-stroke, single-cylinder 125cc engine that makes about 8.3PS power at 7000rpm and 10.1Nm at a low 4500rpm. Boasting of being the lightest in its class at 113 kg, Yamaha India claims the Saluto will offer mileage of 78 kmpl. The disk brake version of Yamaha Saluto also gets four new colour schemes and sporty graphics and is priced at Rs 54,500 (ex-showroom Delhi).