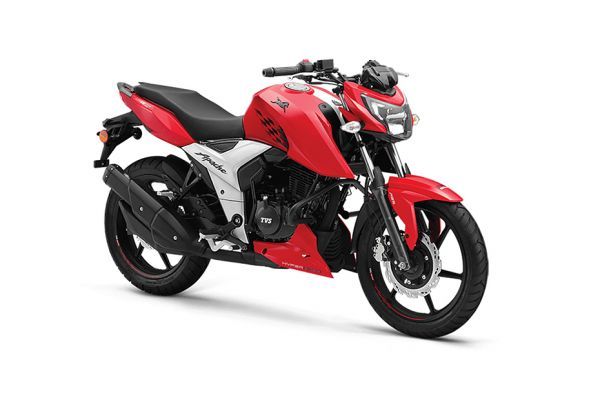 TVS hasn’t updated the Apache RTR 160 4V for a while now, but the 2020 model has been spotted, giving us a closer look at what we can expect from the upcoming motorcycle. Apart from some small cosmetic tweaks, the 2020 RTR 160 4V is expected to get a BS6-compliant engine. In its current state of tune, this motor makes 16.8PS of power and 14.8Nm of torque, but we expect it could have a slightly different output in the upcoming bike. The 2020 Apache RTR 160 4V could get a price hike of Rs 7,000 to Rs 10,000 over the current FI ABS bike, which retails at Rs 99,101 (ex-showroom Delhi). In terms of rivals, it goes up against the new Suzuki Gixxer and the Bajaj Pulsar NS160.

In the midst of growing competition from 160cc streetfighters, TVS needed a modern performance commuter that can hold its own. For this, the Hosur-based bikemaker introduced a smaller version of the RTR 200, called the Apache RTR 160 4V. It has a similar design language as its elder brother and comes with a slightly more comfortable single-piece handlebar. Thanks to the refined engine, slick gearbox and potent underpinnings, the RTR 160 4V is one of the most versatile 160cc nakeds one can buy. In order to offer customers more flexibility, TVS offers the motorcycle both in carb and FI variants. Both bikes get ABS as standard, and the carburetted version gets a rear drum brake as an option too. Price starts from Rs 89,851 for the base ABS variant. The TVS Apache RTR 160 4V competes with the Yamaha FZ-S Version 3.0, Suzuki Gixxer, Bajaj Pulsar NS160 and Honda CB Hornet 160R.

TVS is offering the new Apache RTR 160 4V with two engine options - EFI and Carbureted. The fuel-injected version of the 159.7cc, oil-cooled, single-cylinder engine with 4-valves produces a segment-leading power output of 16.8PS. The carb version, on the other hand, puts out 16.4PS. Torque figures remain the same on both variants - 14.8Nm at 6500rpm. When compared to the older model, the new bike makes 1.4PS and 1.7Nm more. The Apache RTR 160 uses the same split cradle frame as the RTR 200. The telescopic front forks and the rear monoshock unit were developed in partnership with the Japanese firm Showa. The fuel-injected version of the RTR 160 is brought to a halt by 270mm front and 200mm rear petal discs. The carb version, on the other hand, gets a 130mm drum unit at the rear. However, TVS is offering a rear disc brake as an optional accessory.

The TVS Apache RTR 160 4V draws its design from its elder sibling, the Apache RTR 200 4V. Among the many components that are common between the two include the headlamp with LED DRLs, the all-digital instrument cluster, fuel tank, side panels and even the LED tail light. However, the RTR 160 4V makes do with a single-piece saddle and single-piece handlebar instead of the split seats and clip-on handlebars seen on the bigger bike. TVS has given ABS a miss for the time being too. That said, the TVS Apache RTR 160 4V boasts of top notch quality and fit-finish.

Suzuki Gixxer : The Gixxer’s engine and suspension have been developed under the watchful eyes of the same designers who also produced the Suzuki GSX-R series. This is a worthy city-based sporty 155cc bike with distinct design and enviable refinement.

Yamaha FZ V2.0: The V2.0 delivers in style, build quality, refinement and handling. It is also the only bike in the segment to get fuel injection, but that has also upped its price out of this league. It is a strong performer and a proper upgrade to the previous version.

Bajaj Pulsar NS 160: The Pulsar NS 160 ticks all the right boxes when it comes to style, performance, ride and handling, save for refinement. The new NS 160 is a worthy contender and makes a strong case for itself in this highly competitive 160cc segment.

If a bike has to survive in the cut-throat 160cc two-wheeler segment, it needs to be competitively priced and pack enough performance to keep riders happy. Thankfully, the Apache RTR 160 4V delivers well on both fronts with class leading features and a price tag that starts at Rs 81,490 (ex-showroom for carb, single-disc variant). However, it doesn’t feel as confident under hard braking as the Bajaj Pulsar NS 160 or the Honda Hornet. That said, the Apache RTR 160 4V is not only the most refined RTR we have ridden till date but also one of the most refined 160cc motorcycles to be ever produced in India.

TVS Apache RTR 160 4v: Should the Gixxer be worried? : PowerDrift