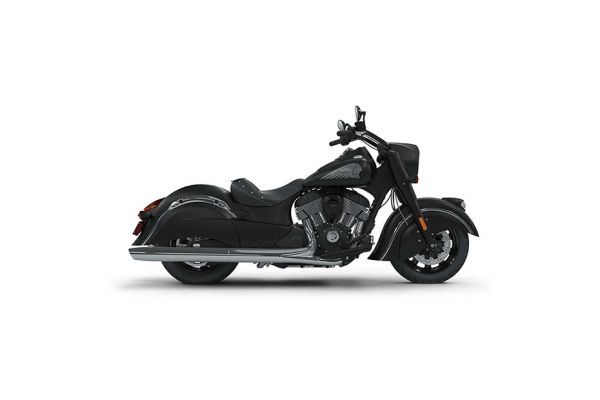 3.4
(7 reviews)
Rate this bike
Alert me when launched Ask A Question

The Indian Chieftain Dark Horse is the second motorcycle under the Dark Horse moniker to be launched in our two-wheeler market. The new motorcycle is basically the blacked-out version of the standard bagger motorcycle. It has been priced at Rs 32.50 lakh (ex-showroom, Delhi). The cruiser bike has been brought to Indian shores as a CBU (completely built unit). As the name suggests, the bike gets a satin black finish which makes it look more sinister than the standard motorcycle and it is offered as a single-seater while pillion seat is optional extra. The large batwing fairing stands out with its trio of headlamps while the integrated LED turn indicators look nice. The curvy, valanced front fenders with the illuminated mascot and the subtle chrome trimmings on it endow the motorcycle with an unique personality.

Being a premium cruiser, the bike has been loaded with features like an electronically adjustable windscreen, a semi-digital instrument console, hard panniers, cruise control, cruise control, keyless ignition and an infotainment system. It also gets satellite navigation, a 100 watt stereo system with Bluetooth connectivity, USB compatibilty and an AM/FM radio. The digital display on the console reads out details like average fuel consumption, gear position indicator, range, tyre pressure, engine oil temperature, odometer, trip meter, audio settings, ambient temperature, etc. At 2571mm, the Indian Chieftain Dark Horse is a massive bike and the bike weighs 377kg! And, to propel the bulk there’s a 1811cc, Thunder Stroke V-Twin engine delivering 74PS of power and a massive 139Nm of peak torque at a mere 2600rpm. The engine is mated to a 6-speed gearbox. Talking about mileage, the Chieftain Dark Horse returned 15.30kmpl on the highway and 13.54kmpl in the city. With its 20.8 litre tank, the bike has a range of close to 300km on a full tank.

The front end features 43mm telescopic fork with 119mm of travel, whereas the rear features adjustable monoshock unit. Braking is done by dual rotors of 300mm diameter with 4 piston caliper up front and a single disc with 2 piston calipers out back while ABS is standard. The Indian Chieftain Dark Horse is the most customisable motorcycle in the portfolio of the American bikemaker and it rivals the Harley-Davidson Street Glide Special and the Moto-Guzzi MGX-21.

It’s dark, it’s beautiful and it’s huge. How does the Indian Chieftain Dark Horse feel like to ride in our conditions?

Indian Chieftain Dark Horse is going to launch in India with an estimated price of Rs. 31.99 Lakh

Indian Motorcycles Get A Bigger Heart And A Makeover!

What is the expected price of Indian Dark Horse?

The price of Indian Dark Horse is expected to be Rs. 31.99 Lakh.

What is the launch date of Indian Dark Horse?

The estimated launch date of Indian Dark Horse is 24 Feb 2021.

What are the top competitors of Indian Dark Horse?