Trust the Radeon’s Econometer and it rewards you with absolutely staggering fuel efficiency figures. Read on to know more 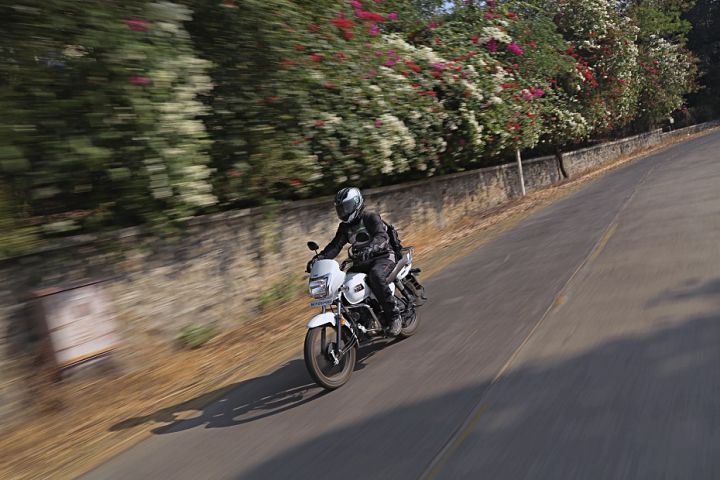 Last month, I pushed the Radeon out of its comfort zone just to see how bad its fuel efficiency could get, and I was quite surprised at the outcome. This month though, my focus changed to getting more kilometres per litre. Hence, I followed the Econometer on the Radeon’s instrument cluster and boy did it pay off. Let me clarify what this feature is all about first. There are two lights - Economy and Power - in the instrument console. It essentially takes the engine rpm, speed of the motorcycle and throttle position into account and gives you a fair idea about how you are riding. The Economy light stays on if you stay below 55kmph (speedo indicated) and use just about 10-15 per cent throttle. This light goes off and the ‘Power’ light turns on once you give it the beans or exceed 55kmph.

On the surface, this feature may not seem like a big deal. But I was curious as to how much of a difference it might make on our riding style and more importantly, the bike’s fuel efficiency. So I tanked up to the brim and made sure I stayed in Economy mode as much as I could, which was approximately 95 per cent of the time. It returned an absolutely staggering 116.29 kmpl! I thought it was a bit too far-fetched, so I tested it again. This time though, the rear tyre’s pressure was down and I was able to manage only around 77kmpl. Third time’s a charm, right? So, I tested it again, and the route, as usual, was my regular home-office-home commute (about 50 per cent of city and highway roads) along with some short grocery runs. This time around, it again returned an impressive 112.9kmpl.

I then gave the motorcycle to our road tester Benjamin Gracias and he did the efficiency run in Economy mode as much as he could and got 79kmpl. Although this was much higher than TVS' claimed efficiency figure, it was still nowhere close to what I was able to manage. It's possible that Ben isn't as good a hyper-miler as I am, but we'll verify this once again next month. The bottom line is that you can get really high efficiency numbers if you stay in Economy mode all the time. But there’s a catch:

You’ll have to be really, really patient to ride that slow. Moreover, you’re basically under-speeding on the highway, and that’s quite risky if you aren’t alert about your surroundings. Most people do not really have that kind of patience and end up wringing the throttle (at times) anyway. But if you’re patient enough, the Radeon rewards you with really good mileage figures. Oh, and the exhaust note - it really has that ‘braap’ factor, which is the last thing you’d expect on a commuter. People do take notice of its deep, bassy exhaust note. It sounds quite nice, especially on narrow streets.

The Radeon was our support bike at one of our photoshoots at Lavasa. I realised staying on Economy mode on hilly roads is an extremely difficult task as the 110cc motor can only do so much without strain! Going downhill, the engine braking helped a bit but I ended up using the brakes aplenty anyway. The brake cables loosened up pretty quickly on the ghats. I got them tightened and they’re much better now. However, I still crave for a disc brake as the drum’s bite and feel just doesn’t match the potential of the motorcycle. Another grouse is that the skinny tyres tend to lose grip rather quickly on gravel. I was taking a U-turn on a bad patch and the front end gave up surprisingly quickly, resulting in me dropping the motorcycle. Thankfully, the engine guard took the brunt and the motorcycle emerged unscathed. Stay tuned for more updates about this sweet commuter in the months to come!