At first glance, Mahindra’s baby crossover looks a lot sweeter, but is it a sweeter deal on all fronts? 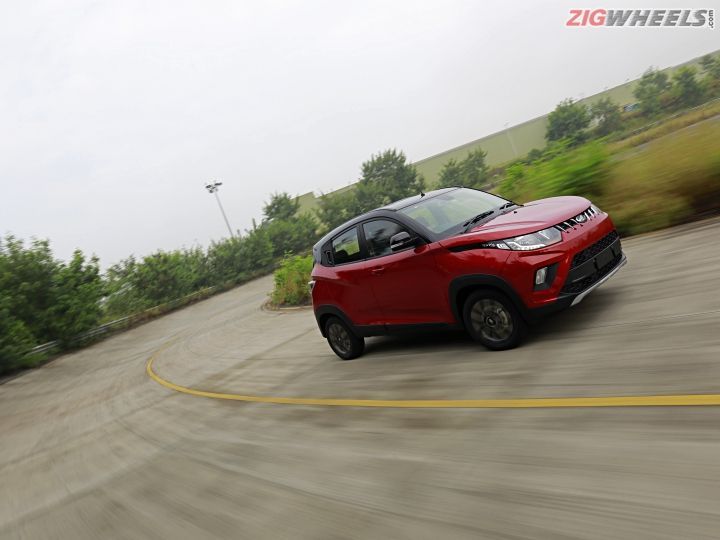 Just last year, we were introduced to the quirky but strangely charming KUV100 by Mahindra. An effort to bridge the gap between a compact hatchback and an SUV, this sub-four-metre crossover offers more contemporary styling and urban appeal compared to the company’s larger offerings, the TUV300 or the NuvoSport. However, the little KUV despite its SUV-esque footing hasn’t really got its rivals like the Maruti Swift or the Hyundai Grand i10 worried. Can this refreshed, well short of an usual facelift lifecycle, up the KUV100’s game to the NXT level?

While most of the design is unchanged, the Mahindra KUV100 NXT has some immediately noticeable changes. The clamshell bonnet isn’t any different from its predecessor, but the headlights, while retaining their basic shape, now feature twin pods, with restyled indicators and DRLs. The front bumper design has been updated to feature a more distinctive air dam, with the reshaped fog-lights getting body colour surrounds. Even the slender nose grille gets more distinct chrome inserts and at the bottom of the bumper, there’s a well defined silver skid plate. Also Read - KUV100 NXT Vs Grand i10 Vs Ignis: Spec Comparison

A large silver skid plate can also be found around the back, with a redesigned rear bumper that carries over the styling sensibilities of the front bumper. Extending from the roof is a new, integrated spoiler with what the company calls ‘Aero Corners’ - basically Mahindra-speak for the extended spoiler integrating smoothly down the tailgate. The tailgate too has seen a bit of a redesign, with a new crease running across the back that adds a bit more bulk. Just like with the headlights, the overall shape of the tail lights has been carried over as has their twin-pod layout. However, they get a clear-lens cover that adds a sharp touch of modernity.

Viewed bang-on from the side, the squarish, black plastic-clad wheel arches house new 15-inch dual-tone diamond-cut alloys. If you ask me, even though they’re a far sight better than the smaller 14-inch wheels that debuted on the original KUV100, these 15-inchers still look a bit disproportionate in the car’s profile, especially considering the extra musculature added by the new character line running across the bottom part of the doors. An extra bit of pizzaz that’s noticeable from the side, as well as the front actually, are turn indicators integrated into the new, electrically-operated, power-folding ORVMs.

Generally speaking, while the styling formula hasn’t changed in the grander scheme of things, the KUV100 does look more attractive than before. And in the two-tone paint scheme of our test car, with its black roof, as well as A, B and C pillars, it even felt a bit evocative of the Range Rover Evoque from certain angles. Also Read - Mahindra To Launch KUV100 NXT Electric In 2019

Step into my parlour

The raft of design refinements continues on the inside of the KUV as well. Layout-wise, the dashboard will feel instantly familiar to anyone who’s driven the earlier car; however, the lighter colour plastics and fabrics around the interiors have made way from a much darker theme. Honestly, I think the KUV looks all the better for it, and while the plastics in use are far from soft-touch, the textures in play, especially on top of the dash, do lend it a modicum of premiumness.

The most apparent change is the addition of a 7-inch touchscreen infotainment system, available in both the mid and top variants. While it’s been borrowed from other contemporary Mahindra SUVs, it’s a welcome addition to the cabin. The infotainment experience is quite good, with a host of connectivity options including Bluetooth, USB and aux, all controlled through a touch interface that’s intuitive, extremely responsive and fairly legible even in harsh sunlight. And it even gets a full-fledged built-in navigation system. Also Read - Mahindra KUV100 NXT Launched At Rs 4.39 lakh

I wouldn’t particularly like to pick nits here, but in this day and age, I believe Apple CarPlay and Android Auto should’ve been included as well. This screen also features a new driver information display that can show mileage data, range to empty and even visual feedback from the parking sensors. You don’t get a reverse parking camera, even in the top-spec car, although Mahindra tells us that the system is fully compatible with one and it can be easily installed at dealer level as an accessory.

Right below the new infotainment system are new air-conditioning controls. No climate control here, but the controls feel much improved and easier to use, and the new air-con system is completely electronic, which Mahindra says has gone a long way in reducing the dashboard’s wiring complexity. I would like to mention that the top-spec K8 variant we were driving featured a remote opening tailgate that can be triggered only using the button on the key fob, with no apparent mechanical failsafe - a strange choice if you ask me. The rest of the cockpit pretty much follows what we’ve seen before and there are no surprises here.

Space: Above and beyond

Just like before, you can get the KUV100 in either a 5- or 6-seat configuration. We drove the 6-seat option that gets a bench for the front seat, although the driver’s seat is individually adjustable. Of course, you can seat three in the front only in a technical sense, and anyone but the tiniest of occupants will have trouble fitting their knees behind the dash-mounted gear stick.

Thankfully, the middle seat can be flipped down to create a massive centre armrest for the driver and passenger and it even even gets a couple of cup holders. The NXT carries on the KUV’s tradition of offering interesting storage spaces, with a box that can be accessed by flipping the passenger seat up, and an under-floor space near the feet of the rear passengers.

The glovebox too is surprisingly wide, able to accommodate a decent amount of stuff and gets a cooling function in the top-end model. Overall, seating space in the KUV100 is great, with ample amounts of knee, leg and headroom for all occupants. The seats themselves are quite comfortable, and ever under-thigh support all around is fairly decent. The driving position, though, is quite upright, like that of an SUV, so it gives you a commanding view of the road ahead.

Proof of the pudding

The KUV100 is offered in the same choice of 1.2-litre petrol and diesel motors that we’ve seen before. We drove the three-cylinder diesel engine-equipped car and performance from the 78PS/190Nm unit is unchanged. It doesn’t feel particularly powerful, but has a decent amount of bottom pull, with its peak torque kicking in from 1,750rpm onwards. The top two K6+ and K8 trim levels also offer Mahindra’s micro-hybrid technology, which is the company’s terminology for an automatic start-stop system. In the diesel-engined KUV, these two variants along with the K4+ variant also gets the power/eco button. In ‘power’ mode, the motor feels quick to respond, while the mileage-conscious ‘eco’ mode dulls down throttle response and should feel right at home while driving in bumper-to-bumper city traffic. Also Read - Mahindra e2oPlus: First Drive Review

Mahindra says that they’ve added new silent engine mounts to improve NVH levels in this KUV100 NXT. For the most part, I’d say they work well in the diesel variant we drove, isolating a fair amount of vibrations from the cabin. However, that doesn’t detract from the slightly annoying level of engine noise that still manages to creep into the cabin.

With no mechanical changes to the monocoque structure or suspension either, ride and handling remains at what we’ve come to expect from this little crossover. The tall design means that there is a bit of body roll when you pitch it into corners, but it does manage to remain confident and under control if you get a bit aggressive with the steering. Suspension setup is still on the softer side, so it should still be able to handle real world roads quite well. On the whole, it pretty much feels like a tall hatchback to drive and that’s a real plus point for those who might feel intimidated with the notion of getting behind the wheel of an SUV.

This is one area where we can wholeheartedly say that Mahindra has done an excellent job. Just like the earlier car, ABS and EBD come as standard across all the variants. However, this time around, even dual front airbags are included on all trim levels except the base K2 model, which still gets them as an option though.

For this NXT update, Mahindra has revamped the trim nomenclature. The base K2 diesel starts at Rs 5.39 lakh ex-showroom Mumbai, moving on to Rs 7.33 lakh for the top-spec K8 diesel. What is really commendable is that prices for the K2, K2+ and K4+ models have actually gone down despite offering more features, while those for the K6+ and K8 have gone up only marginally.

The KUV100 is far from Mahindra’s most popular model. However, it’s quite a cute looking little thing that drives reasonably well, and even manages to undercut quite a few mid-level hatchbacks in terms of pricing. Not bad considering the amount of SUV-feel the car offers, if not actual SUV ability. And with the host of enhancements it now offers across the board, the KUV100 is certainly looking more interesting than ever before.