While the KUV100 NXT gets new features, the changes done are mostly cosmetic 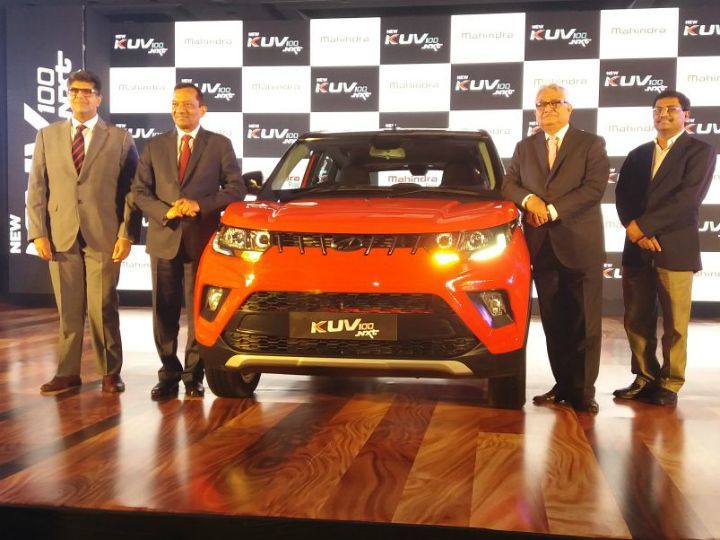 Mahindra has launched the KUV100 facelift at an introductory price of Rs 4.39 lakh for petrol and Rs 5.39 lakh for the diesel version. This is a mid-cycle update of the KUV100, which comes with restyled exteriors and some new features. The top-spec K8 variant is priced at Rs 6.4 lakh for petrol and 7.33 lakh for diesel (All prices are ex-showroom, Mumbai). At this price point, it continues to be the cheapest car offered by the manufacturer in the country. Bookings for the KUV100 have already started and deliveries will begin soon. The KUV100 NXT is available in five variants each with petrol and diesel engines, namely K2, K2+, K4+, K6+, and K8.

The KUV100 facelift, while retaining the quirky character of its predecessor, sees it toned down quite a bit. Changes on the exterior include restyled front and rear bumpers with silver coloured skid plate-like inserts adding to its SUV-like appeal. It also gets a tweaked front grill flanked with dual barrel headlamps. On the sides, black cladding on the wheel arches and lower body have been tweaked. The character lines, also, have been sharpened to make it look sportier. The tailgate has also been refreshed with character lines enclosing the new clear lens tail lamps. It also gets new 15-inch diamond cut alloy wheels along with integrated roof rails and rear spoiler which adds to its SUV-like design. Mahindra says the new KUV is longer than before but no specifications are provided yet.

On the inside, the cabin looks similar to the older version except for the fact that the new model gets black interiors with piano black and silver colour inserts on dashboard and steering wheel. It will be offered in a 6-seat configuration as standard with an optional 5-seat configuration. Mahindra has introduced a new 7.0-inch touchscreen infotainment system with various functions including Bluetooth, GPS navigation, driver information system, and Blue Sense app but lacks Apple CarPlay and Android Auto. Other features on offer include electronic AC control, driver seat height adjuster, power folding wing mirrors, remote lock/unlock for tailgate, multi-info display giving information about gear position, drive mode and fuel economy. On the safety front, the KUV100 NXT is equipped with dual front airbags, cornering brake control, ABS, EBD and rear parking sensors.

The Mahindra KUV 100 NXT it will be taking on cars like the Maruti Suzuki Ignis, Hyundai Grand i10, and the Tata Tiago.

Ford And Mahindra Team Up, Sort Of

Mahindra XUV 500 Gets A New Variant

Mahindra TUV300 Gets A New Variant