Can the newest cross-hatch in town tempt you away from the king of compact SUVs? 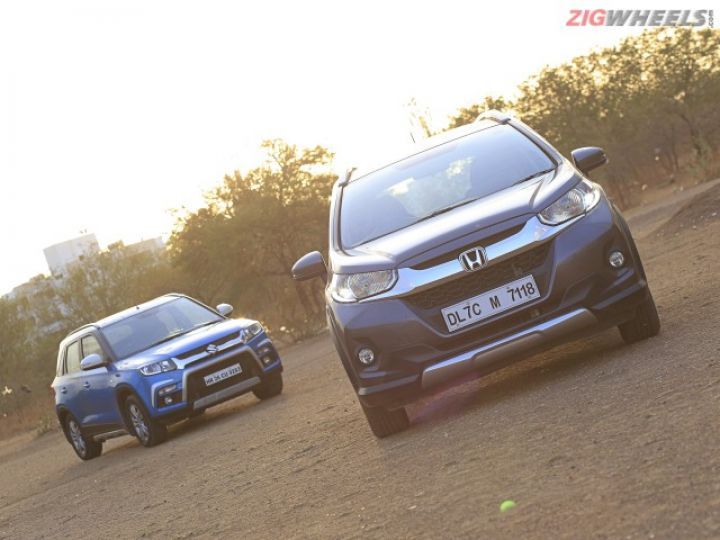 Arun and I were doing the Mumbai-Pune round via the expressway for possibly the 14th time in 2017. To kill time during the three-hour-long journey, we started a game called spot the Vitara Brezza. We spotted a lot of Brezzas.

It’s no understatement to call Maruti’s only sub-4 metre SUV a nightmare for its rivals. When launched, it made Ford slash the EcoSport’s prices and within a year the Brezza had recorded over 2 lakh bookings. But early this year, a new contender emerged to take on this seeming Goliath – the Honda WR-V. Both rivals tweak existing product platforms, both have been developed by their manufacturers’ Indian arms and both look at off-roading the way I look at Alexandra Daddario – out of the league.

The WR-V is a convincing cross-hatch but a cross-hatch nonetheless. It has a butch and flat-ish bonnet, fat chrome grille and thanks to the stubby headlamps, it even looks like the more aggressive one of the two. However, you will draw some parallels with the Jazz, given the similar silhouettes. The Vitara Brezza has an advantage here. Unlike any of its competitors, it’s based on a bigger SUV i.e. the Grand Vitara and looks the part too.

It reminds me of the Chevrolet Forester (RIP model and make), the erstwhile king of crossovers when the segment didn’t really have any options. Apart from the black cladding + faux skid plate combo common to both cars, the Vitara Brezza gets projector headlights, along with auto headlamps and wipers, none of which Honda offers. And while both cars employ 16-inch alloy wheels, Maruti slapped on fatter rubber with bigger sidewalls – 215/60 vs the WRV’s 195/65.

The Vitara Brezza doesn’t have the “Out of my way” design value of the Honda but in comparison, its dimension formula focuses on height (1,640mm) and width (1,790mm), where it beats the WR-V by healthy margins. This helps it get respectable road presence but it isn’t intimidating like the Mahindra TUV300. The WR-V is slightly longer at 3,999mm but it’s the car’s 55mm wheelbase surplus that gives it an advantage in terms of usability.

The U in SUV

Both cars are easy to get into. They aren’t traditional SUVs, so there’s no climbing in involved per se but once you’re at the helm, there’s a world of difference. The Brezza’s driving position is commanding and you sit looking down upon the dashboard and bonnet. In the WR-V, it feels no different than the Jazz and that’s partly a good thing.

The Vitara Brezza may give you the feel of an SUV, but the continent-sized glass area of the Honda makes it feel like a bigger car altogether. The airy feel is greatly aided by the segment-first sunroof. There’s also a greater sense of premium quality in the grade of plastics, with nothing to really fault. Benchmark? No, but it’s still good for the money. I felt the same way about the Vitara Brezza when I first drove it but in this company, the budget-grade plastics and flimsy glove box lid make their presence noticeable.

The WR-V also gets reach adjustment for the steering, while the Vitara Brezza’s only tilts. That said, both cars have easy ergonomics and while Maruti has opted for the simpler layout, Honda’s added thoughtful touches like the adjustable can holder in front of the driver’s AC vent and quarter glass after the A-pillar that aids visibility, especially at T-junctions.

Boil it down to cabin space and the WR-V gets an unsurprising advantage. The Jazz has always been a benchmark for roominess and the WR-V just betters that. Drag and drop two six-footers one behind the other and the rear occupant will be bewildered by how much legroom and foot room there is. The seats are also wider, offer more under-thigh support and are more accommodating of bigger frames. Round to Honda then?

Well, not entirely. The seats may be bigger but they’re way too soft and foamy. Take a test drive and you will like them, but drive it for 20km or so and you wish for the firm edge the Vitara Brezza’s seats get. Also, the WR-V’s spacious cabin may fool you into thinking it’s better at seating three abreast, but a little ‘sit and see’ test saw its rival come out on top. The numbers agree as the Maruti offers 130mm of additional rear shoulder room and a little more rear headroom too.

The WR-V does get a bigger boot (363-litre vs 328-litre) but the Brezza’s boot is plenty accommodating and even gets seats that split 60:40 and fold almost completely flat. I’ve moved a refrigerator from Mumbai to Talegaon in my previous-gen Jazz with two other occupants with me thanks to this feature and it’s a shame the WR-V doesn’t get it.

I mentioned the WR-V’s sunroof, right? That aside, both get a smart-key, push button starter, cruise control and distracting infotainment systems. However, it’s less so in the Vitara Brezza because the SmartPlay system is now bug-free. This wasn’t the case when Maruti introduced us to the setup with the Ciaz. The system has a clean interface, big fonts and is quick to respond to touch or even steering control inputs.

Honda’s Digipad screen gets navigation, MirrorLink and voice commands like the Vitara Brezza but misses out on Apple CarPlay. I’d still forgive that had it not been for the lag in the system. The interface is typical of an Android head unit, so no troubles with that but the delay in touch response gets on your nerves quick. Even inputs from the steering, say, to skip to the next song you’re streaming via Bluetooth, are met with delays of 4-5 seconds. Honda needs to fix this quickly.

Both cars get reversing cameras and while the WRV does give you the multi-view function, Honda, in its infinite wisdom, has skipped rear parking sensors. To its credit, the WR-V does get dual airbags and ABS as standard while the Vitara Brezza gets it from the ZDi variant onward. Also, while both get automatic climate control, the Vitara Brezza’s air-con is considerably more effective and the controls are simpler and easier to use.

200Nm – the torque figure that’s common to both, delivered at the exact same 1,750rpm. However, the WR-V (100PS) does get a 10PS power advantage with the power kicking in earlier too. The power difference isn’t biblical but there is a monumental contrast in how the engines behave.

Sure, both engines are vocal at startup and while the Vitara Brezza manages vibrations better, it’s not by a big margin. Get on the throttle, though, and the distinction is apparent. The WR-V’s power delivery is smoother and it’s doled out in one continuous dose. There is a bit of turbo-lag but even when the boost arrives, it’s not a night and day difference. Gear changes are a bit fidgety but it’s an otherwise lovely car to drive in the city.

The Vitara Brezza also has enough low-rev torque and it’s not a cumbersome city drive either but there’s a lot of turbo-lag. Something this 1.3-litre motor is famous for. It results in having to work the gearbox more to avoid revving too much or letting the engine speed drop significantly. You will adapt to it soon enough but the 1.5-litre i-DTEC remains the more easy to approach urban motor. However, the Honda engine lacks the oomph you’d expect from one of the most powerful diesels in the segment. There’s simply no punch, so despite its lag, the Vitara Brezza’s in gear acceleration is quicker. 30-80kmph in 3rd gear takes 8.58 seconds, compared to the Honda’s 8.89 seconds. Move up a cog, though, and the Maruti’s taller 4th gear magnifies that lag and makes it nearly 1.5 seconds slower from 40-100kmph.

It’s also not as calm a highway tourer as the Honda. At 100kmph, the WR-V, thanks to its 6th gear, is ticking below 2,000rpm, while the Vitara Brezza sits around 2,400rpm in top gear. As a result, the WR-V is also more efficient with a tested highway efficiency of 25.88kmpl vs the Vitara Brezza’s equally impressive 25.30kmpl.

While the Vitara Brezza does feel punchier to drive, the performance isn’t hair-raising. For that, you’d need the DDiS320 but I digress. It’s still quicker than the more powerful WR-V with the 0-100kmph sprint managed in 12.36 seconds (WR-V = 13.06 seconds). Where it is significantly better, though, is in its city efficiency. We ran the test twice to be sure and while the WR-V managed a reasonable 15.35kmpl, the Vitara Brezza delivered an astounding 21.70kmpl!

On first impressions, the WR-V comes off as the better rider of the two. It is more comfort-set and the softer suspension does a better job of dealing with potholes and bad patches without letting much through to the cabin. In comparison, the Vitara Brezza is stiffer. Big potholes and sharp edges make their presence felt inside but as you pick up the pace, the tables start to turn.

Because of its soft-set nature, the WR-V feels quite bouncy. You’re fine at city speeds but things get worse as you go faster, with vertical and lateral movement getting amplified and uncomfortable even before you’ve hit triple digits. Through the bends, body-roll is quite evident as is the rebound from the raised suspension. The steering is a super-light in the city but on the highway, it doesn’t weigh up well enough and remains devoid of feedback through corners.

This is where the Vitara Brezza knocks it out of the park. The low-speed ride isn’t as comfortable but it stays very stable as you go faster and you can drive right through most rough patches. The steering is responsive and quite engaging to use, leaving little to the driver’s guesswork. It is easily the better handler with more mature highway mannerisms too, and even though it sits higher above the ground (GC = 198mm vs WR-V’s 188mm), body roll is controlled f-a-r better.

The WR-V’s brakes also need to be more progressive as most of the servo kicks in right at end of the pedal’s play. That said, with the brakes slammed hard down, the WR-V did go from 100-0kmph in 41.90 metres, compared to the Vitara Brezza’s 44.04 metres.

So Who Pops the Champagne?

The WR-V does bring a load of practicality to the space with its segment-leading boot size and palatial cabin room. It’s also a more dedicated stab at the segment than its cross-hatch compatriots since it does get some unique features and even technical alterations vs the Jazz.

However, looks, sunroof and cruise control aside, its primary selling points are the exact same as the Jazz and it does it while actually offering a weaker ride and handling package. Additionally, drawbacks like the excessively soft seats, lack of adjustable headrests or even a rear armrest, render a major USP, legroom, null.

The Vitara Brezza is no saint and has pain points like its average interior quality, laggy diesel engine and stiff ride. But it gets the basics right. It’s engaging yet easy to drive, can seat the family and their luggage, is a fair bit more efficient overall and importantly, gives you the SUV experience in a better package. It’s also available in more affordable, no-frills variants for lower budgets. Bottom-line, the Vitara Brezza holds its crown.