If there was a Temple of Off-Road, Honda’s Africa Twin would be one of its leading deities. Does the all-new Africa Twin have the divine ruggedness of the classic, and hack its way as an all-rounder in its uber sophisticated segment? 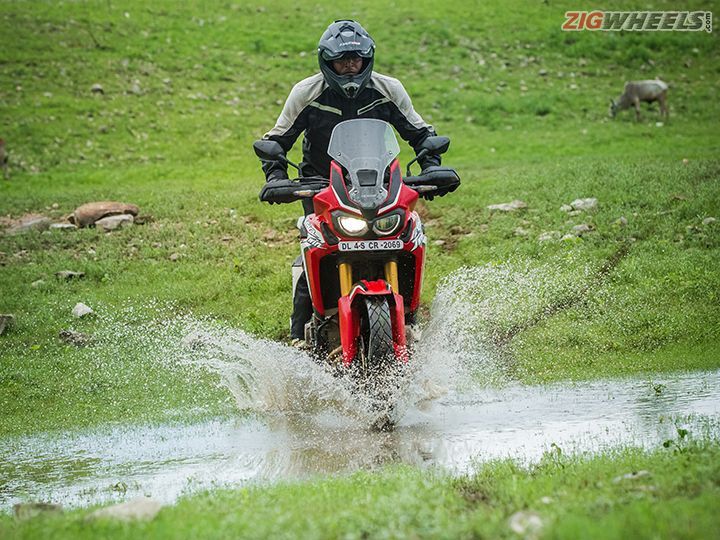 We’ll keep this brief. For those who don’t know it, the Africa Twin is the big dog of adventure bikes. So ginormous is the legend of the Honda Africa Twin that even though it wasn’t in production for the last 12 odd years, expectations from the Honda are sky high. And let’s not forget that the competition is now super-tech, power-crazed and usable every day! Maybe we are expecting too much? Maybe. But, when the motorcycle in question is packing in tech like a dual-clutch automatic transmission, and draws on the experience of Honda’s Dakar works team, you know the nameplate isn’t being bandied around carelessly.

So this is all-new, right?

Yes! The new CRF1000L is very different from its predecessor. The most important differentiator is the engine. The new 999cc motor is a parallel twin, whereas the older 650 and 750cc bikes used a V-twin. The parallel twin trades some of the slimness of the vee while making the setup lighter and more cost effective. Going by its power delivery or exhaust note, you’d be hard pressed to think of this as a parallel twin. The slightly chattery idle and strong torquiness at low revs make it feel like a vee! The engine also uses a single camshaft to operate the four valves for each cylinder and there’s no ride-by-wire here. Also, while other motorcycles in its class are offering IMU-based electronics or at least rider modes, the Africa Twin doesn’t. The Honda Selectable Torque Control, a simple traction control system, is adjustable in three steps, or can be switched off altogether. Almost as if to make up for all of that, you have the dual-clutch transmission.

We spent some time with the Africa Twin in the slush and muck. One thing is for sure: the bike comes alive when you head off the road. It isn’t about the massive 250mm of ground clearance, or the 230mm front wheel travel or the 220mm travel at the rear. Its because of how it all comes together. The 86 degree of steering movement lock to lock, the 820mm-low seat height (same seat can be adjusted to 840mm), and the confidence from the front wheel just made the going much easier. Right from the design of the engine to where the battery and electronics sit behind the engine instead of near the tail (for better mass centralisation), has helped the Twin feel lighter. The split dual cradle frame is inspired from the Dakar racer, the CRF 450 Rally, and is tuned for feel and rigidity.

Despite Honda’s claims, the Twin didn’t feel super narrow -- the Ducati Multistrada would be a close rival on that front. Then when you grab the wide handlebar and stand up on the somewhat small foot pegs, the Africa Twin just starts to feel oh-so-right. The front wheel inspired tons of confidence to steer through slush, and the massive 21” front wheel clambered over rocks with ease. However, the Honda does feel a bit front-heavy and makes you second guess tricky approaches or tip toe cautiously through slow turns. At 245kg, the Twin is the heaviest motorcycle in this class, and some of that extra weight is thanks to the automatic transmission.

The big benefit of the dual-clutch transmission is most obvious in these conditions. The DCT takes out the hassle of thinking about changing gears and makes the going much smoother. Just focus on the lines and let the DCT handle the rest. The Sport modes let you choose your level of aggressiveness as well. There is also the ‘G’ button, which stands for Gravel, and pressing it makes the transmission tighten the link between your right wrist and the rear wheel. Riding in and out of a pool of water, you could finely meter the throttle to get the drive out of the slick mud.

Riding in these conditions, the only way to make progress was to keep the traction control switched off, else it would cut power too much. In dry and loose conditions the HSTC Level 1 lets you spin up the rear to power out of corners and tighten your line. To its credit the ABS system didn’t feel juddery or out of place in the muck. While the rear wheel ABS can be switched off via a dedicated button on the left hand side of the cockpit, you can use the rear brake smoothly without obvious ABS intrusions.

One big plus is that all the various settings can quickly be adjusted on the fly, except for the rear wheel ABS. However, the preferences get reset every time you switch off the engine. Sadly, while Honda is offering a range of accessories for the Africa Twin, off-road-spec tyres aren’t on the list. The on-road bias of the Dunlops meant that the rear wheel slithered frequently while trying to put the power down. Overall, there is no doubt that if you like your adventures dusty and dirty the Africa Twin is the bike that will do the trick.

Did you drop it?

Yes. Once, the side stand dug itself into the ground and the bike came crashing down into the soft mud. The damage? Nothing. Other falls in the group were more severe, but the Africa Twin seemed to live up to its promise of ruggedness very well.

Lots! We rode the Africa Twin 900 kilometres from Udaipur to Pune. We experienced a mix of long sweeping highways, straight stretches, pelting rain and city traffic. The convenience of a wide range of steering movement and not having to bother with gear changes was undeniable as we hit thick traffic on the outskirts of Mumbai. This genuinely multiplies the appeal of owning a big bike. Imagine not having to deal with a heavy clutch!

The gearshifts are mostly imperceptible and only if you are swinging up and down between the 2-3000rpm zone does it fumble gear changes. The transmission’s D mode can be considered as the cruise mode when you want to chill, and tends to upshift early and use the abundance of torque that the engine dishes out.

The India-spec Africa Twin is slightly detuned compared to the European machine. But, neither of them can match up to the power count of the rivals. If you look past the spec sheet you’ll find that the Honda has enough juice to cruise at rapid speeds and the strong power delivery right through its rev range makes it an easy motorcycle to ride. It won’t make you giddy with power, but there is enough. There is no cruise control on offer as the Africa Twin does not use a ride-by-wire setup. On wet hilly roads, with the S3 mode selected on the transmission, we could timely downshift and use engine braking to get us smoothly through corners without the need for heavy braking.

Far from it. Even after 900kms in the saddle you step off the bike feeling fresh. The upright seating posture contributes a lot to that, but the windscreen gets extra credit. The slotted screen blows a bigger hole in the air than its size suggests. The seat though could have done with slightly softer cushioning.

On the broken roads between Vadodara and Surat the Honda shook off gravel patches, potholes and ruts without batting an eyelid.  When you have to jump on the brakes you’ll find that the bite is super strong and brake dive is well controlled.  The suspension setup is well balanced and the Africa Twin steers sweetly too. With just an added hint of force at the ‘bars the Honda drops quickly into corners. You can genuinely satisfy your craving for cranked-over moments on this! The only hiccup here are the Dunlops which felt a bit lacking in feel and squealed under even a hint of hard braking.

At first, the DCT-equipped Africa Twin will not be loved. I repeat, at first. On our introductory ride I found myself grappling to come to terms with slowing down the 245kg bike while relying just on the brakes! A frightening prospect for any motorcyclist, and even more so when riding on unfamiliar roads that have been soaked by a downpour.

To make matters worst, the left side of your body feels completely lost. Your four fingers, which are used to making pulls of the clutch lever, have to make do with either pulling at the upshift paddle, which is where the pass flash switch would normally be. And just past that sits the paddle to adjust the traction control. The thumb now has to handle the horn, the scroll for the on-screen menus, the indicators (which aren’t self-cancelling) and the downshift function too! The left foot has nothing to do now, but doesn’t seem to mind it too much.

This setup works, but it’s just that it takes time for the human mind to unlearn old ways and relearn the new ways. By the end of my Udaipur to Pune ride, the left thumb was almost at ease switching between the down-shifter and indicators. The right thumb handles the Drive selector, and you can also select from three Sport modes that change when and how the gearbox shifts up and down. For instance, in S3 mode the gearbox hold onto a gear longer for quick acceleration, and shifts down early to give you engine braking too! It’s almost like how you would shift when riding hard!

After I first rode the Africa Twin, I begged the folks at Honda to bring the manual as it would be cheaper and lighter too. We expect the simpler Africa Twin will no doubt bring out the brand of wild magic that we expect from the Africa Twin nameplate. At Rs 13 lakh ex-showroom the DCT equipped Africa Twin is already priced very competitively! After spending more time with the DCT and experiencing how the automatic transmission multiplies the usability of this big motorcycle in the city and out on the rough stuff has enhanced its appeal massively.

Spend enough time with the DCT and you are likely to never look back.  For now, expect the DCT-equipped Honda to confound you at first. The Honda won’t seduce you with power or sophistication either. But, what it has is enough. Enough to tackle whatever you throw at it, and plough deeper and further in the search of adventure. And that, is almost divine.