Ford Figo 1.2L AT: Best Automatic For A Budget

Figo’s discontinued 1.5-litre petrol-automatic was aimed at enthusiasts who had their eyes set on a certain German model. Can the 1.2-litre automatic be sensible yet fun? 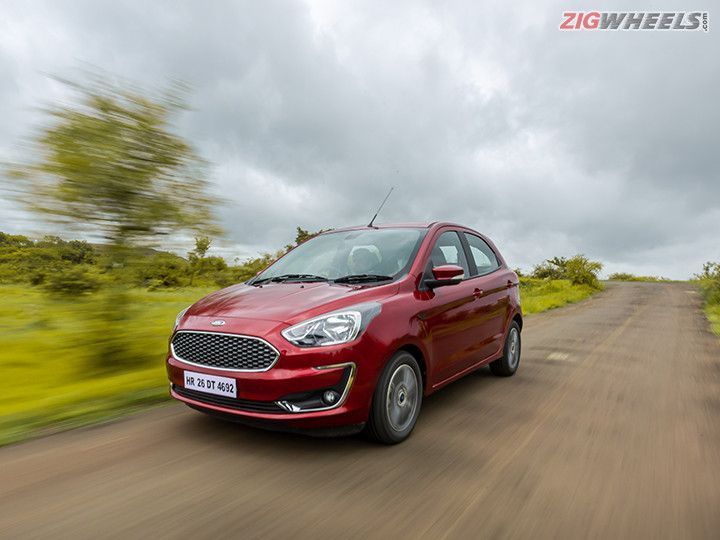 If we’re to be honest, we had almost forgotten about the existence of the Ford Figo. Once widely popular for its handling abilities and powerful engine options, it now stands lost among more family-friendly hatchbacks with sharper looks, newer features, and more economical automatics. Ford plans to remind you just how good the Figo is by launching more sensible petrol-automatic variants.

And unlike the segment where every automatic is a rudimentary AMT, the Figo gets a proper 6-speed torque converter automatic. However, apart from this mechanical update, no other changes have been made to the Figo. Can the convenience of this drivetrain be enough for you to overlook its dated-ness and bring it home?

The Ford Figo now comes with just two engine options: a three-cylinder 1.2-litre petrol and a four-pot 1.5-litre diesel. While the diesel only gets a manual transmission, the petrol engine now comes with the option of a 6-speed torque converter automatic. Earlier, this automatic was available with the 1.5-litre petrol engine which was discontinued in the BS6 era. The 1.2-litre automatic is exclusive to the Titanium+ variant. It would have been better if it was also available with Titanium Blu, which is the top-of-the-line trim for the manual transmission, just because it looks sportier.

Figo’s petrol engine is more powerful than the competition: the Swift and Grand i10 Nios. It makes a healthy 96PS of power and 119Nm of torque. However, it is the only 3-cylinder unit of the three (Swift and Grand i10 Nios). This helps it deliver better low-end torque but it’s also a little viby at idle. Starting is smooth and for a 3-pot motor, the vibrations are well damped. There is a mild buzz on the steering but that quickly vanishes as the revs climb. The creep function is very well calibrated and the Figo picks up speeds gradually just by getting off the brakes. However, you will feel a bit of a jerk if you dial in too much throttle post the creep. Keep the throttle input in check and it’s smooth sailing.

The sweet spot of the Figo is surely the mid-range. The power comes in strongly around 2500rpm and keeps pulling well till 4500rpm. This is the range where it even sounds pleasing. Given that most of your commutes will happen in this range, the Figo does them effortlessly. Be gradual on the throttle and it will surf the torque wave, letting you accelerate without downshifting. This reduces the number of gear shifts and helps deliver a smooth and seamless drive experience. Overtakes too are effortless within the city as downshifts are quick and lag free.

All in all, the sensible part of this automatic has been really well executed. Figo can commute even in heavy traffic situations effortlessly. The Figo AT is claimed to offer an efficiency of 16kmpl, however, even when we reset the display and drove calmly for 30-odd kilometres, the MID figure never went beyond 9.6kmpl. We will have to get the Figo back for a proper road test to put the verdict out on efficiency.

When you start to push this engine is when it starts to struggle. Power is concentrated in the mid-range and beyond 4500rpm, the Figo runs out of breath. As a result, if you are looking for some quick overtakes, the Figo shows resistance. Shift to sport mode and the gearbox will hold on to gears for longer and even downshift a couple of cogs when you smash the throttle. And all of this happens quickly. But then the engine starts to scream, there is no real acceleration to excite you. You are better off short shifting and building speed gradually than trying to pull off a quick overtake.

Not just in spirited driving, the Figo loses steam at higher rpms even on the highways. It settles very nicely into a cruise but you will need to plan overtakes in advance. You can’t just poke your nose out on a dual-carriageway and expect the Figo to take care of the rest.

While the feature list has not been tampered with in this transmission update, a few safety features are now part of the AT lineup. These are Hill Hold Assist, Electronic Stability Control (ESC), and Traction Control System (TCS). Also, the Figo is still the only hatchback in the segment to offer six airbags. Plus, the rear camera display is among the better ones.

If you are wondering about the handling, comfort, features and space of the Figo, do check out our review of the Blu variant and our comparison stories. Links below.

The Figo has been MIA for so long that it is no longer even considered by buyers. This can be seen in the sales numbers: In 2021, the Figo found less than 500 buyers. Swift sells over 17,000 units every month.

That said, this drive has reminded us why we liked the Figo to begin with. It has a well-balanced suspension that keeps you comfortable, handling that can put a smile on your face, and a safety net like no other in the segment. Also like no other is the automatic transmission -- a proper torque converter in a pool of AMTs. It even drives the part with a relaxed and effortless experience in the city. The only struggle for this drivetrain is its sporty driving and highway overtakes.

The Figo AT Titanium is priced at Rs 7.75 lakh and the AT Titanium+ costs Rs 8.20 lakh. So if you are in a market for a calm commuter and focused more on the way it drives and feels than how it looks and the dated feature list, the Figo is still a strong contender. What Ford has done brilliantly is price the Figo AT lower than the Maruti Swift AMT. With six airbags and a proper torque converter automatic, the value is hard to beat.