Has Ford updated the Figo enough to make it a compelling buy over its rivals? 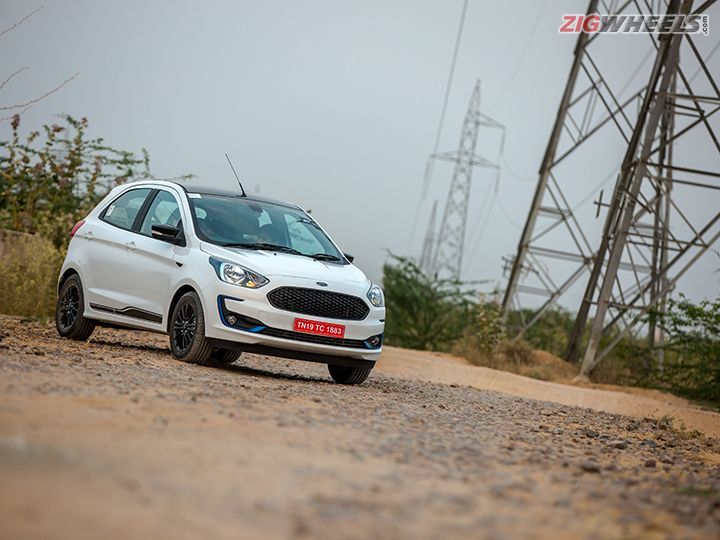 The outgoing Figo was a sensible hatchback. It was compact, but spacious, there were powerful petrol and diesel engines on offer and it had a petrol-automatic drivetrain as well. In fact, the Figo was and still is the only car in its segment to offer six airbags. Its dynamics were sorted and the ride was comfortable too.

However, the Figo was getting old, and its petrol engines felt uninspiring. In a bid to make it competitive, Ford has now launched the 2019 Figo facelift. It comes with subtle cosmetic tweaks and Ford has tried to address the performance by plonking in two new petrol engines and a new manual transmission too. We got a chance to sample the Figo facelift to find out if these changes help it make a more compelling case than before.

If you’ve seen the 2018 Aspire facelift, consider that you’ve seen the Figo facelift as well, at least from the front. The updated headlamps, the front grille and the bumper design are borrowed from the Aspire. In the Figo Titanium Blu variant that we drove, the front grille is done in glossy black and there are blue inserts in the front bumper (chrome in the lower Titanium variant). It gets contrasting black roof and ORVMs as well. At the rear, the Figo gets a new bumper and revised tail lamp detailing. The multi-spoke black alloy wheels in the Titanium Blu variant are 15-inch units. These are shod with 195/55 R15 rubber, making them significantly wider than 175/65 R14 rubber on lower variants. The Titanium variant gets 14-inch silver alloy wheels.

With all these changes, the Figo looks fresher than before, but does it look modern? Not really. A rear spoiler, skirts, LEDs in the head and tail lamps and DRLs could have made the Figo Titanium Blu a looker. LED elements would have also made the lower Titanium variant look more in line with the times. So, while the updated Figo looks better than before, its appearance alone is still unlikely to seal the deal for many.

Otherwise, the cabin is more or less the same as before apart from minor changes like chrome door handles in the top variant and a more informative driver MID. In the top Titanium Blu variant, the headliner is done in black, and it lends the Figo a sporty and high-quality feel. The Figo is a spacious hatchback, like before, although it appears compact from the outside. Talk of storage spaces, and while there are 2 bottle holders in each of the front doors and cupholders between the front seats, there’s no cupholder or bottle holder in the rear doors. The Figo also misses out on rear air-con vents, but its aircon does the job quite well even otherwise.

The 1.2-litre, 3-cylinder naturally aspirated petrol engine that the Figo gets develops 96PS of maximum power, 8PS more than the outgoing engine. It’s not a big jump on paper, but this engine is more involving. It develops its peak torque of 120Nm at 4250rpm, but the surge starts to begin from around 3000rpm. The pull is strong in any gear and it makes the Figo accelerate at an appreciable rate.

If there’s a lazy zone in the engine, it’s at the lower end. However, the Figo’s throaty exhaust note begs you to keep the engine over the 3000rpm mark. I’m happy to report that the petrol Figo has got a good dose of energy now, thanks to the Dragon.

The other 1.5-litre Dragon Series engine in the range is even more powerful (123PS), but it comes with an automatic transmission only, which is a torque converter now instead of the dual-clutch automatic earlier. We haven’t driven the Figo with this powertrain yet, but it’s the same as the one on the EcoSport. In comparison, the Swift gets an AMT (automated manual transmission) ‘box with both petrol and diesel engine options. Gearshifts in the AMT aren’t as jerkfree as the torque converter, but the AMT is the more affordable option as well. The Hyundai Grand i10, on the other hand, is available with a 4-speed torque converter, but with the petrol engine only.

The third engine in the range is the existing 1.5-litre diesel unit, but paired with a new 5-speed manual transmission from Getrag that is claimed to have better shift quality than the outgoing one. With the new transmission, every gear slots with surety, but the gear changes could have been slicker. And this holds true for the manual transmission with both the engines. Like before, the diesel engine pulls the Figo forward with spirit and it comes into its own once past 1500rpm.

Ford has left the performance-oriented Figo S out of the mix for now, so whichever Figo you pick, it is tuned to offer a comfortable ride. That said, road inconsistencies do filter inside the cabin, but the suspension doesn’t crash into potholes and the ride is never uncomfortable.

Between the petrol and the diesel Figo, the petrol is more agile around the corners. The steering is set up light, but it has a tendency to come back to the centre, and that adds some fun. That said, the steering setup on the diesel Figo feels more communicative, possibly due to the extra weight at the front. The top-spec diesel-manual Figo weighs 31kg more than its petrol counterpart. The difference between both becomes more apparent in straight lines; the diesel Figo holds the line with more confidence and the corrective steering inputs feel more precise.

Better equipped than before

The Figo facelift is more feature-loaded than before. The new features on the top Titanium Blu variant include rain-sensing wipers, auto headlamps, auto-dimming day-night IRVM and leather-wrapped steering wheel.

For the Figo, Ford has opted to keep its 6.5-inch touchscreen infotainment system with SYNC3, Apple CarPlay and Android Auto out of the equation. This infotainment unit is available on the Freestyle (Figo-based cross-hatch) and Aspire (Figo-based sub-4m sedan), both priced at a premium over the Figo.

Instead of the more expensive unit, Ford is offering the 7-inch infotainment system with the Figo, which is a car directed more towards value-conscious buyers. Ford has also managed to lower the price of the top variant of the Figo by Rs 20,000 despite adding more features.

The 7-inch touchscreen system of the Figo covers all the basics. It can connect with a smartphone via USB to play music. It’s got navigation assistance and it also projects feed from the rear parking camera as well; the parking guide lines are, however, not dynamic. That said, it does feel low-cost compared to the 6.5-inch unit when you compare the display quality; this one isn’t as crisp. The touchscreen, however, accepts inputs with fair accuracy.

The top-spec Figo remains the only car in its segment to feature six airbags. In its automatic avatar, the Figo also gets electronic stability programme, traction control and hill launch assist. Now that Ambiente is the Figo’s base variant, dual front airbags and ABS are standard. Over the previous pre-facelift Figo Ambiente, this variant is equipped with day/night IRVM, rear parking sensors and vanity mirror on the passenger sunvisor. On the whole, all Figo variants are now more equipped than before and yet cost lesser.

The updated Figo is priced from Rs 5.15 lakh (ex-showroom India) for the base Ambiente variant. That makes it Rs 68,000 more affordable than the pre-facelift Figo Ambiente. All other variants are also more affordable than before. Since Ford had added more equipment to the Figo and priced it lower than its existing variants, it has certainly become a more value-for-money package than before. The most expensive Figo on sale now is the Titanium manual-AT variant, priced at Rs 8.09 lakh (ex-showroom India).

In order to make the Figo look up-to-date, Ford has tweaked its bumpers and headlamps. While the changes have managed to refresh the Figo, it still doesn’t look as modern as its rivals. As a result, the Figo’s appearance alone won’t draw you to buy one. The sporty-looking Titanium Blu variant, however, looks the part, and with a spoiler, side skirts and DRLs (if Ford plans to offer them as accessories), it can look even more attractive and modern.

With the best-in-segment safety net and a lower sticker price than before, the Figo is undoubtedly a more sensible package now. But what seriously puts the Figo back in the game is the Dragon series petrol engine, which is more engaging than the outgoing unit. With the petrol-diesel fuel price difference narrowing, a good petrol engine was the need of the hour for the Figo to remain in contention. And this update has, therefore, come in at the right time.