Bajaj got the marketing spot on with the new V15 motorcycle. But can the new 150cc motorcycle deliver similar performance on the tarmac? 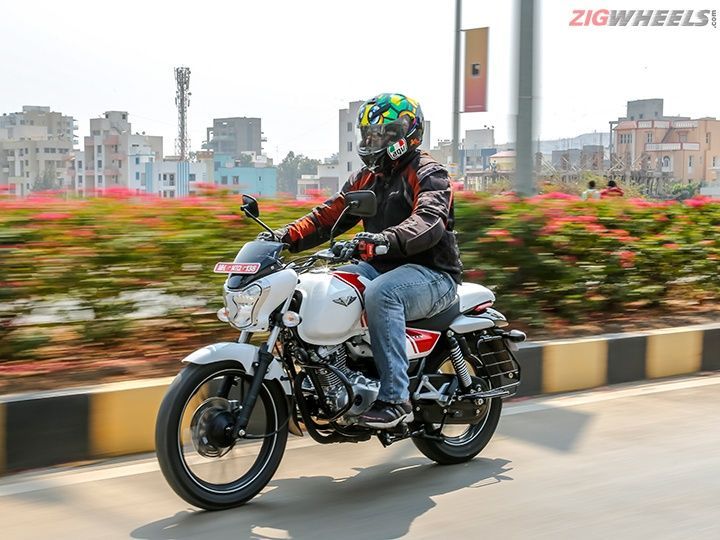 The 150cc segment of motorcycles is an intriguing space in the Indian two-wheeler market. From street bikes to full-faired motorcycles to cruisers to semi-faired motorcycles there are tonnes of options for a prospective buyer. The undisputed king of the 150cc segment is Bajaj Auto and it has maintained its dominance in the form of four offerings- Discover 150S, Pulsar 150, Pulsar AS150 and the Avenger 150. Despite the above options, Bajaj feels there’s space for more and have ridden in the new Bajaj V15. The new motorcycle is the first offering from the new premium commuter brand that Bajaj plans to kick-start in the near future. It pulled off a marketing genius with the V15 as it marketed it as bike made from the steel (only fuel tank assembly) of INS Vikrant – India’s first aircraft carrier that was scrapped recently. By playing the patriotic tune, the V15 was a rage on social media when it was unveiled prior to 2016 Auto Expo. But we aren’t here for our marketing lessons but to ride and find out whether the new Bajaj V15 is an able competitor in the executive commuter segment.

The styling of the Bajaj V15 is confusing to say the least. It seems as if two design teams were employed to work on a single project as it looks like an unusual combination of a cafe racer and a normal commuter. The trapezoidal headlight which is claimed to be the brightest in the segment looks oddball on the bike owing to its form. In profile, the V15 is more pleasing on the eyes with the sculpted fuel tank, megaphone style exhaust muffler and the multi spoke alloy wheels. The fuel filler cap with the INS Vikrant logo is a neat touch while the pearl white paint job on our test bike with metallic flakes looked good. The rear section of the motorcycle is well proportioned with a contrast coloured grab handle and the petite LED tail lamp unit.

However the overdose of chrome on the rear suspension springs, exhaust muffler and the headlamp housing look tacky. While we aren’t impressed by the design of the Bajaj V15, it seemed to have appealed to the masses as many people stopped to click pics of the bike and bombard us with queries regarding it. We though suspect it was the bright red and white paint scheme that played a significant part in grabbing their attention. The instrument console is a basic analogue unit with speedometer and trip meter while the fuel gauge bar changes from green to red when the bike hits reserve.

Switch gear quality is average while engine kill switch has been a given a miss to save cost. The rear seat cowl, larger grab rail and crash guard are optional extras and cost Rs 999. The cowl can be removed easily with the help of an allen key that has been embedded into the key fob. Talking about build quality, the Bajaj V15 looks and feels like a motorcycle that has been built to a cost.

The Bajaj V15 is powered by a 149cc, single-cylinder motor that produces 12PS of peak power at 7,500rpm and 13Nm of peak torque at just 5,500rpm. The powerplant has been mated to a five speed transmission which in typical commuter fashion is “all down”. Bajaj officials had briefed us before the ride to not expect shattering performance from the V15 and by the end of the test ride I couldn’t agree more with their words. The Bajaj V15’s performance is disappointing for a 150cc displacement motor. The bike struggled to reach three digit speeds while vibrations were felt from the footpegs and fuel tank. Mid-range performance though was good with the torque coming in handy while overtaking in traffic.

Special attention was given to the exhaust note which is a bit throaty but nothing exceptional. The Bajaj V15 feels comfortable cruising at speeds around 70kmph in fifth gear. Talking about gearbox, the gear shifts aren’t as crisp as it Japanese rivals while the clutch action felt sticky. Performance isn’t the forte of the Bajaj V15 as the motor feels a generation old in company of modern 150cc powerplants and we feel that the Avenger 150’s engine should have been used on the new bike. Being a short ride we couldn’t test the mileage figures, but the company claims that the V15 will return 55kmpl in real world conditions.

Low saddle height, centre-set footpegs and wide handle bar echo its commuterish DNA and the riding posture is upright and comfortable. But I found the foam density of the seat too soft as after spending a considerable time on the bike you feel like you have “sunk into” the saddle. Also the fuel tank isn’t easy to grip with your thighs owing to its form. The Bajaj V15 isn’t a motorcycle that you would go corner hunting and that show in its neutral handling dynamics. Manoeuvrability though is something that is vital for any commuter and the Bajaj V15 shines on this aspect as its agility helped me in negotiating the torrid Pune traffic rather effortlessly. Braking is done by a disc unit at the front and drum brake at the rear.

Braking performance was satisfactory with good bite from the front disc but they lack feel and progression. Telescopic front forks and gas charged twin shock absorbers at the rear handle suspension duties. The bike is well damped as it rode over broken roads and undulations effortlessly. The plush ride quality is among the highlights of the motorcycle and given our poor road conditions it’s a boon.

Among the strong point of the Bajaj V15 is its cut-throat pricing of just Rs 62,000 ex-showroom Delhi with the optional accessories. At the above price point, it offers tremendous value for money proposition for a 150cc displacement motorcycle. Sadly it doesn’t evoke the same emotions with respect to performance. Also the flamboyant styling isn’t to our taste but gauging from the response of the onlookers, it seems to have worked with the masses.

While the marketing team did a fabulous job in generating the curiosity around the Bajaj V15 it will be interesting to see whether or not the V15 is able to strike a chord with consumers in due course of time. So if you’re in the market for a standout commuter with good ride quality and agility, the Bajaj V15 is an interesting option. But if engineering finesse figures in your criterion, we would suggest you to look for something else.