Rejoice, The High Performance Ford Mustang Mach 1 Is Coming Back

It is slated to be the most powerful production-spec 5.0-litre V8 Mustang 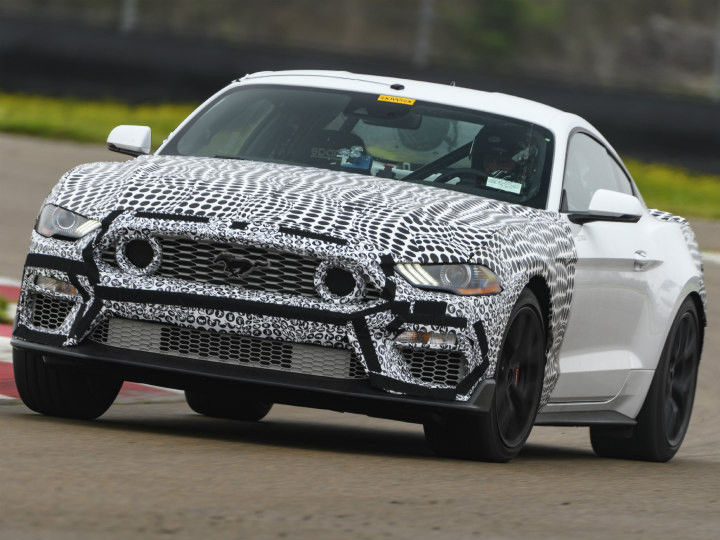 The Mach 1 moniker has been an iconic name in the Ford Mustang family since its debut in 1969. It was created as a performance oriented package for the Mustang. It was originally retired in 1978, with a revival in 2003, but it was brief and retired once again in 2004. Currently, the Bullitt variant is the middleman between the GT and Shelby trims. Well that’s about to change now, as Ford has confirmed the revival of the Mustang Mach 1 after 16 years with a set of testing images.

The images show the Mustang Mach 1 in a camo wrap, but it's clear that Ford is staying true to the Mach 1 tradition when it comes to exterior changes. We start off with a revised front end that consists of larger air intakes, a revised grille with two circular openings and a sporty lower lip. At the rear, the Mach 1 features a rear spoiler that is similar to the Shelby GT350R.

Other shots reveal the presence of blacked out wheels with Brembo brakes, larger calipers and a set of Michelin Pilot Sport Cup 2 tyres. While the interiors haven’t been revealed yet, a small glimpse reveals Sparco seats and a roll cage. However, this is a test mule, so a roll cage is unlikely to feature when the production-spec Mach 1 rolls out.

Detailed technical specs of the Mach 1 are yet to be revealed, but Ford claims that it will be the most powerful naturally aspirated 5.0-litre V8 Mustang around. Currently, the range topping Bullitt variant occupies that spot with figures of 480PS and 569Nm. Aside from a power jump, Ford also claims that the Mach 1 will be the most track capable 5.0-litre V8 Mustang, so expect some alterations in the suspension department as well.

Ford has yet to reveal a specific date for the unveiling of the Mustang Mach 1, but we can expect a debut towards the end of this year, with a launch in early 2021. Back home, it is highly unlikely for the Mach 1 to show up, but we are expecting the Mustang facelift soon. The pre-facelift Mustang is currently sold at a price tag of  Rs 74.62 lakh (ex-showroom Delhi). Expect it to be priced at a premium over its predecessor thanks to the upgrades it gets.