Is placed between the GT and Shelby models 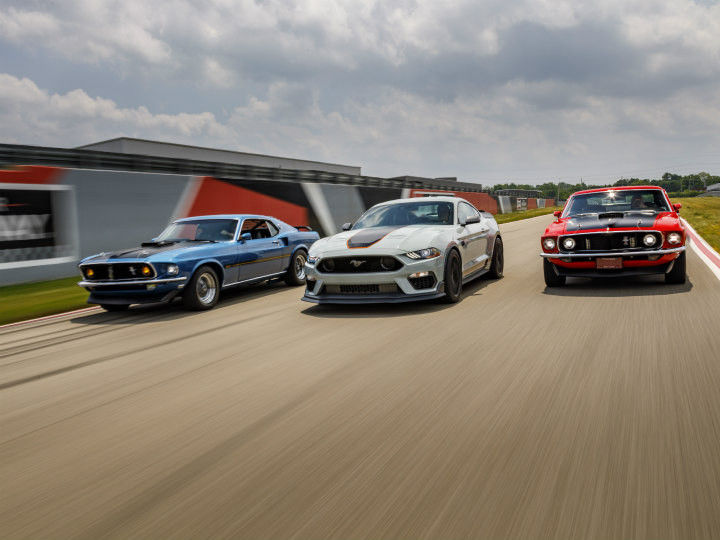 Shortly after teasing the Mustang Mach 1, Ford has officially revealed its high-performance fastback coupe. This a revival of the Mach 1 moniker after a 17-year hiatus. It sits between the Mustang GT and Shelby variants and sports a mix of bits from the Shelby models and some inspiration from the older Mach 1 models.

In terms of design the 2021 Mustang Mach 1 harks back to the original model from 1969, with a 3-D mesh grille with two circular inlets that act as air scoops instead of headlamps like it was in the original. Other design highlights include bigger side air intakes, sporty front lip, two options of 19-inch alloy wheels and a rear wing with a gurney flap like the GT500.

Inside, you are greeted with a new Dark Spindrift instrument panel with aluminum accents, new door sill plates, and an updated splash screen on the 12.3-inch all-LCD instrument cluster. Other highlights include  a white cue ball shift knob for the manual transmission, and engraved badging that displays the vehicle’s chassis number.

Under the hood, it retains the same naturally aspirated 5.0-litre V8 engine as the Bullit variant. Performance figures remain the same at 480PS and 569Nm. But this engine is not entirely the same as the one on the Bullit as its intake manifold, oil filter adapter, and engine-oil cooler have been borrowed from the Shelby GT350 variant. In terms of transmission options, the Mustang Mach 1 gets the option of a rev-matching Tremec six-speed manual gearbox or a 10-speed automatic transmission. The Bullit only gets the six-speed manual gearbox. Technically, the Mach 1 and Bullit are jointly the most powerful 5.0-litre V8 Mustangs around.

While engine performance remains the same, some technical wizardry in the form of the latest MagneRide calibration, revised EPAS calibration, a stiffer steering I-shaft, stiffer sway bars and front springs, as well as a brake booster. It also gets a new underbody pan that extends 20-inches further than the standard Mustang GT to help increase downforce. Other highlights include Michelin PS4 tires, a rear subframe with stiffer bushings and a rear toe-link taken from the Shelby GT500.

The Ford Mustang Mach 1 will launch in international markets by 2021. It is highly unlikely that the Mach 1 will show up in India, but we are expecting the Mustang facelift soon.