2020 Ford Mustang Shelby GT500 Is The Most Powerful Ford Ever

Well, technically it's the most powerful road-legal Ford ever built. But it does make ‘over’ 700PS! 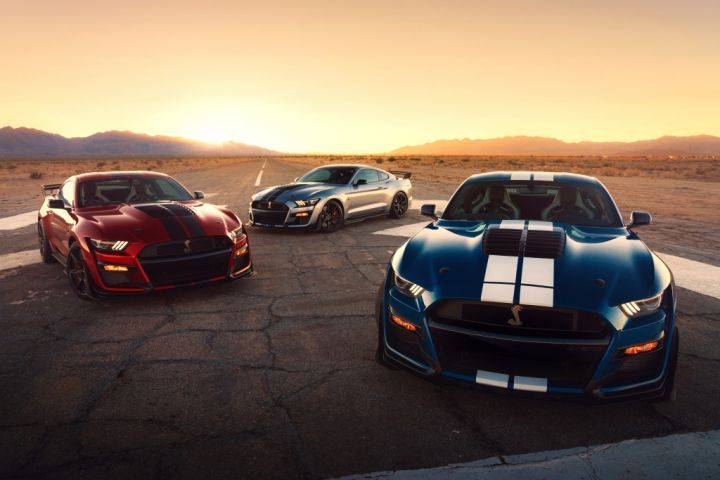 When the words supercharged engine and visceral swagger are read together, you know that you are about to meet something really special. And when the words used are from a Ford press release, it can only  mean one thing. The Mustang.

For starters it is powered by Ford’s hand-built aluminium alloy 5.2-litre V8. The monstrous engine is mated to an inverted roots-style supercharger that sits between the cylinder banks. As a result, it makves ‘over’ 700PS, almost as much as Ford’s Nascar Stock Cars. The engine also gets forged connecting rods and improved cooling compared to the GT350. It also comes with an active baffle system, which ensures optimum oil flow, and a carbon-fibre driveshaft like a BMW M4. The engine is mated to a first-in-class 7-speed DCT sourced from Tremec that claims a shift time of just 100 milliseconds and drives the rear wheels. This dual-clutch transmission is designed for a number of drive modes, including normal, weather, sport, drag and track. It even features Ford’s line-lock and launch control through selectable Track Apps. With the engine and gearbox combo, Ford claims a 0-100kmph time in the mid 3-second range.

The Mustang GT500 has been developed by Ford Performance and draws its tech from Ford’s racing division and its GT4 program. The GT500 ulitlises lighter coil springs front and rear. It also features an updated MagneRide active chassis control with preset controls for the Mustang’s different drive modes.. The 20-inch wheels are shod with custom built Michlin Pilot Sport 4S tyres while the more hardcore Pilot Sport Cup 2s are also available as an option. To stop the beast, Ford has fit the ‘Stang with 420mm 6-piston Brembo rotors, the largest ever fitted to an American Sports Coupe.

The Shelby also comes with two handling packages - a more ‘sedate’ handling package features adjustable strut top mounts and a gurney flap on the rear spoiler. Then there's the Carbon Fiber Track Package which gets carbon-fibre wheels with 292mm rear tyres compared to the 280mm tyres of the standard package. It also comes with an exposed carbon-fibre GT4 track wing and splitters. Tyres are Michelin Pilot Sport Cup 2s and the rear seats have been ‘deleted’ to save weight.

According to Ford, even the form has been designed with function in mind. The gaping front grille ensures 50 per cent better cooling compared to the Shelby GT350. The rear spoiler is standard  and thanks to the car being developed at Ford’s motorsport tech center, the GT500 makes the most dowforce of any Ford before it. Wind tunnel design or not, the new Shelby is probably the meanest looking Mustang Ford has ever made. The grille is clearly reminiscent of the Shelby AC Cobra and looks like it can swallow a man whole. Plus, the sleek headlamps are not unlike the eyes of the Cobra that now sits in the middle of the gaping grille. It sits low to the ground and the wide stance makes it appear it's in attack mode all of the time. The contoured bonnet might feature a removable rain tray for better aerodynamic efficiency but it still looks cool as hell.

Inside too, the Mustang gets a cabin bathed in carbon-fibre, including the instrument cluster and controls focused towards the driver. It also gets Recaro seats with stiff side bolstering and slots for racing harness as an optional extra. As for  infotainment, it gets a SYNC3 system with FordPass Connect  which is mated to a 12-speaker B&O sound system.

The GT500 will debut in the American market in the final quarter of 2019. There is no news of the GT500 coming to India though we sincerely hope that it does.