The BS6 Yamaha FZ 25 is here and all set to take on its rivals in the 250cc space. But will it succeed? 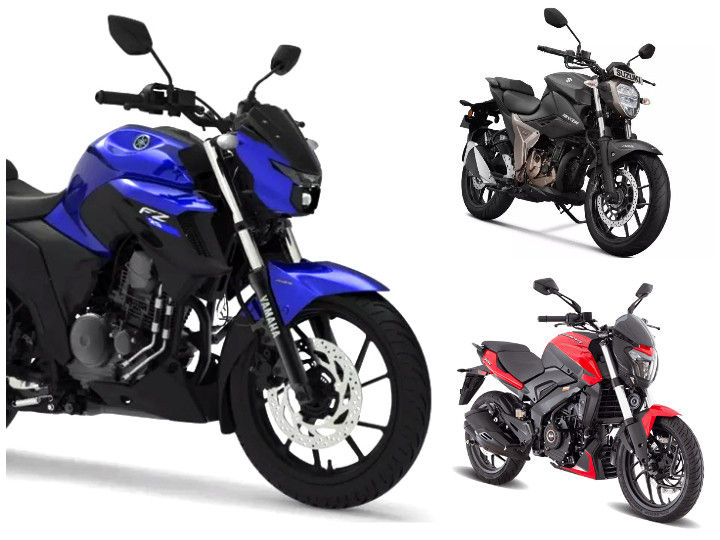 The 250cc motorcycle space has been the centre of attention for most manufacturers in the last couple of years. Yamaha laid the foundation for the segment with the FZ 25 which brought forth new players like the Suzuki Gixxer 250, Bajaj Dominar 250 and the much more expensive KTM 250 Duke. Having said that, the FZ 25 has been missing from the fight for a while now thanks to the country switching to BS6 emission norms and the delays due to the COVID-19 pandemic. But it’s now back with a BS6-compliant engine! And here’s how it fares against its rivals on paper.

Despite packing the same displacement, all three bikes have very different power outputs. Right off the bat, you can tell that the Gixxer has the biggest advantage here. It’s lighter than the Dominar 250 and packs more power compared to the FZ 25, which translates to a power-to-weight-ratio of 169.87PS/ton. The fact that it makes its peak power higher up the rev range means the Gixxer has a wider power band, lending it the ability to extract more from its 6-speed gearbox.

The Dominar 250’s sophisticated liquid-cooled engine offers a power-to-weight-ratio of 150PS/ton. It makes its power slightly lower down the rev range as opposed to the Gixxer, which should aid its commuting credentials. What also works in favor of the smaller Dominar is the inclusion of a slip & assist clutch along with the 6-speed transmission that makes clutch operation much lighter.

The FZ 25, unfortunately, is the least powerful of the trio. However, at 153kg, it’s the lightest bike here. Dial in a torque output of 20.1Nm which kicks in at 6000rpm and you should have a bike that gets off the line a bit quicker than its rivals but not for long though. The lack of a sixth gear would require you to push the bike a lot harder out on the highways to keep up with its rivals, thus overworking the engine, which could lead to less fuel efficiency.

In terms of hardware, the Dominar 250 has a slightly more sophisticated setup -- it's upside down fork and KTM-sourced radially mounted caliper being its party piece. However, one of the biggests reasons for its heft is its perimeter frame. Having the skinniest tyres of the three doesn’t help its case either.

The Suzuki Gixxer 250 and FZ 25 are on a similar playing field in terms of kit. However, the wider and stickier radial tyres on the Gixxer may give it the edge in the handling department.

The Dominar 250 is  the heaviest bike here which could make moving around the parking lot a herculean task. It also has the longest wheelbase for better straight line stability rather than flickability. 13-litres of fuel isn't all that bad but you would find yourself visiting the fuel pumps more often.

The Gixxer is 4kg lighter in comparison and has the shortest wheelbase, which should make it more agile. Apart from this, it has the highest ground clearance; perfect for those oversized speed breakers in India. That said, it has the smallest fuel tank here.

As for the FZ 25, it’s the lightest bike here and holds the most amount of fuel. So as long as you ride diligently, expect a phenomenal commuting range on this Yammie. It should be a lot easier to move around in the parking lot and a bit easier to swing your leg over thanks to its marginally lower seat height.

The Yamaha FZ 25 was once the best value for money proposition in its segment. It undercut the Gixxer 250 by almost Rs 30,000. However, the recent price hike has weakened its price advantage, thus rendering the FZ 25 as a slightly expensive bike with very little to offer.

The Dominar 250, on the other hand, is the best value for money proposition here. It offers a premium set of equipment with an engine which is tuned to work well in the city and out on the highway. While it isn't exactly built to be a corner carver, it would be quite comfortable for your daily commutes and touring adventures.

The Gixxer 250 is a do-it-all bike. You could use it for daily commutes or thrash it around corners on the weekends and it wouldn't throw a fit. The engine too is built to work well in city limits and is capable of maintaining triple digit speeds out on the highway when necessary. Of the three, the Gixxer’s all round capabilities makes it a good purchasing decision. But you have to be prepared to shell out more moolah than the other two.