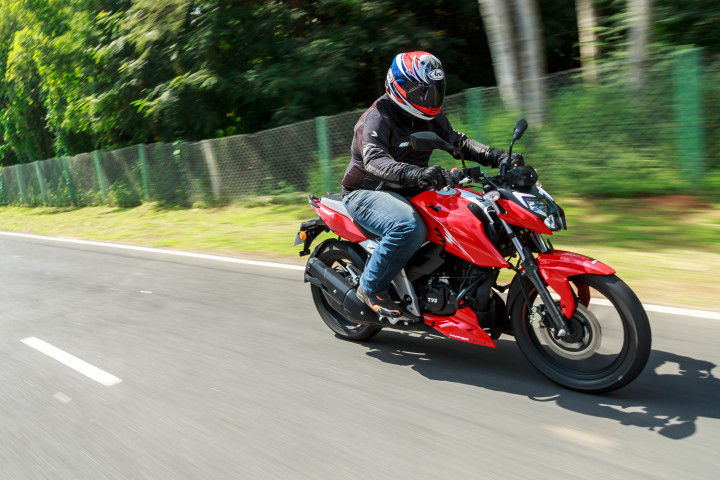 TVS launched the Apache RTR 160 4V with an updated heart which pushed the price of the bike to Rs 1,04,000, a price hike of Rs 3,444 over the BS4 model. The BS6 update also brought with it a couple of cosmetic and feature updates like a redesigned front fascia with an LED headlight, new graphics and GTT (Glide Through Traffic), thus making the bike an excellent proposition. But if you still feel the bike isn't meant for you, you could have a look at the following options.

How about going electric and getting one of the most iconic Indian scooters of all time - the Bajaj Chetak. It features an all-new design that looks absolutely stunning but still manages to retain the essence of the original Chetak. Its equipment list is rather impressive as well and includes LED lights with sequential blinkers, a full-digital instrument console, keyless ignition and a full metal body. Equipped with a 60.3Ah lithium-ion battery, the scooter is capable of offering a claimed range of 95km in Eco mode and 85km in Sport mode. It can be fully charged via a conventional 5A power socket in five hours and has a top speed limited to 60kmph.

The Yamaha FZ-S Fi was the first BS6-compliant motorcycle in this category. However, the transition from BS4 to BS6 norms has taken a toll on its performance, which wasn't great to begin with. The updated BS6-compliant 149cc fuel-injected motor in its current state of tune makes 12.4PS (0.8PS less) at 7250rpm and 13.6Nm (0.8Nm more) at 5500rpm. Moreover, both peak power and torque are produced at lower rpms than before. Its feature list consists of a split LED headlight, a negative digital instrument console and single-channel ABS.

After continuing with the same design for years, Suzuki finally gave the Gixxer a complete overhaul last year. It now features muscular styling, a full LED headlight and tail light, and a revised instrument console. The most recent update comes with a reworked motor which now complies with BS6 emission norms. And although the new BS6-ready motor makes fractionally less power than before, it continues to be one of the most fun to ride small capacity motorcycles.

The XPulse 200 is a strong contender in this price bracket. It lets enthusiasts tap into the adventure touring segment at an affordable price tag. It’s also currently the most affordable ADV to do so. It offers a commanding view with a tall, upright riding position while its long-travel suspension ensures you glide over potholes. It's even equipped to handle trails and rough terrain. What works in its favour is a kerb weight of just 157kg, making it a lot easier to manoeuvre. Features like raised fenders, a tall windscreen, LED headlight and tail light, and a full-digital console with smartphone compatibility add to its appeal. On the downside though, its engine lacks grunt and leaves you wanting for more.

The bike's latest update helps it comply with the strict BS6 emission norms. The update has also made the NS160 the most powerful bike in its segment. The motor, which previously made 15.5PS, has been retuned to deliver 17.2PS -- 1.7PS more than the BS4 model. The increment in performance also puts the NS160 ahead of the BS6 RTR 160 4V, which was once the benchmark in the segment. Aside from better performance, the NS160 also gets six cogs which should help you stretch its legs on the highway. On the downside, the bike's styling remains unchanged and so does its feature list.