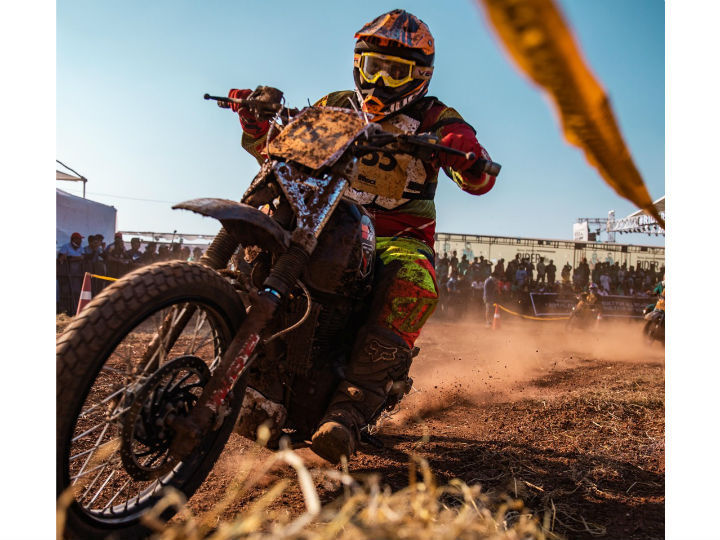 One of the highlights of the 2019 Royal Enfield Rider Mania was the Dirt Track: Media Class race, which took place on the second day. This was the first time Royal Enfield had organised the race exclusively for riders from media publications and I got the opportunity to be a part of it.

Honestly, I was super stoked and anxious as this was my first time experiencing an off-road race. And then I witnessed the Novice 350cc class on day 1. Truth be told, it didn’t do anything to make me feel better as there were so many riders crashing into each other, losing traction and falling down, particularly at the first corner itself!

So, on the second day, we geared up and reached the venue. We were given race-prepped Royal Enfield Himalayan FI. Going around a track competitively commands the need for optimum weight reduction. For this, they had removed the headlamp assembly, instrument cluster, indicators, pillion footpegs and the grab rail-cum-tail rack. The stock rider foot pegs were replaced with bear claw ones for better traction with off-road riding boots.

After a thorough scrutiny, it was time for us to head to the track. The folks from Royal Enfield took us for a track walk to give us a fair idea about the layout of the course and after that, we were given two practise laps to get a feel of our bikes.

Control the clutch, modulate the throttle:

As soon as I gunned it off the start line, I realised how little traction there was. The rear stepped up instantly and I noticed everyone else was also experiencing the same! This is when it dawned upon me that offroad riding is a whole different ball game compared to track days. The laws of physics are trickier here.

While road racing is about going all out, this was more about staying in control and perfecting the balance. Whenever I felt the rear sliding out, I slowed down the speed of the rear wheel by modulating the clutch and throttle. They say, “When in doubt, throttle out”. And that’s exactly what one of my colleagues did when he lost traction on his rear wheel on a muddy patch.

He started sliding violently and lost control of the motorcycle, forcibly veering off to the left side of the track. That was when I realised this mantra works only for riders who can expertly wrestle the motorcycle to stay in control while gassing out of trouble.

Correcting the steering is important too:

Another aspect of dirt riding I learnt was to keep the bike’s front stable. I made sure to push the end of the handlebars in the direction of travel. Push the right end to go right and push the left end to go left. For the best leverage, keeping your elbows raised works well.

Whenever I lost traction on the rear wheel, it was crucial for me to adjust the steering so that the bike’s front end stayed pointed in the direction I wanted to go. I always picked my lines carefully as the surface was changing lap after lap. The first corner was sharp and I realised most riders over shot the inside apex. Consequently, this part of the track had the most even surface, fairly unaffected by tyre trails and was also the best place for me to gain traction.

After the laps got over, we headed to the pits. The top three riders were announced in the evening. Varad More from Motoring World came first followed by Vishal Venugopal (Autocar India) and Varun Painter (PowerDrift). I was not even in the top five but I was more than happy to have finished the race without crashing out. Unfortunately, I didn’t know at exactly what place I finished the race as the folks from Royal Enfield didn’t announce the full results.

Overall, the biggest lesson I learnt from this experience was that feathering the throttle and wrestling with the bike to stay in control are more important than outright speed. Staying consistent is the key here.

The Royal Enfield Himalayan Gets A Wardrobe...