Hallelujah, KTM Finally Answers Our Prayers! The 390 Adventure Is Here 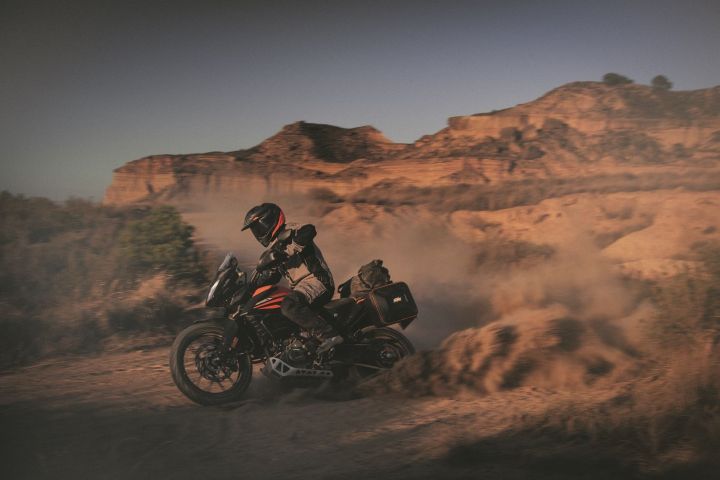 Also Read: We Got Duked, Now It’s Time For A New Adventure

For starters, it looks very much like a scaled down version of the 790 Adventure. The pincer-type LED headlight unit (the same ones found on the 390 Duke and the 790 Duke) is chassis-mounted. The tank extensions are sharp and long. These extensions blend well with the overall design considering the 390 Adventure gets a large 14.5-litre fuel tank.

The large and flat seat should be welcoming enough to accommodate riders of all sizes. Even the raised wide handlebars should give the rider a commanding view of the road. The tall seat might of 855mm feel a tad too high for average sized Indian riders. However, we shall reserve our judgement until we get our hands on the bike. The pillion seat looks equally large and welcoming with chunky grab handles to hold on to.

KTM’s 373cc single-cylinder has certainly been a racy motor as is evident on the 390 Duke and the RC 390. Engine output stands at 44PS and 37Nm. Interestingly, this is the same output as the 390 Duke. There is no drop in power despite this engine being tuned to meet Euro 5/BS6 emission regulations. In terms of electronic aids, the 390 Adventure is the first of KTM's 390 series to get lean-sensitive traction control and cornering ABS with Off-road mode. Such advanced technologies are not even found on higher capacity motorcycles like the Kawasaki Ninja 650 or for that matter the Triumph Street Triple series. Kudos to KTM for offering the tech on such a small-capacity motorcycle.

The tubular steel trellis frame is suspended at both ends with long-travel units. The front-end gets a 43mm USD fork which has a travel of 170mm and can alter the compression as well as rebound settings to the rider's liking. The rear cast aluminium swingarm might look similar to the one found on the 390 Duke but it is longer on this bike. This swingarm gets a rebound- as well as preload-adjustable monoshock unit that boasts 177mm of rear wheel travel. While we would have liked to see spoke rims, alloy wheels are a better bet when it comes to practicality and cost. A 19-/17-inch wheel setup seems like the norm on small capacity adventure tourers like the 390 Adventure. These are kitted out with Continental TKC 70 dual-purpose tyres.

We do not have to wait long to see the 390 Adventure on our shores as there is a high chance that the bike will be showcased in December with a possible launch in early-2020. It’s likely to be priced at Rs 3.0 lakh (ex-showroom Delhi), which would still undercut rivals like the BMW G 310 GS and the Kawasaki Versys-X 300.