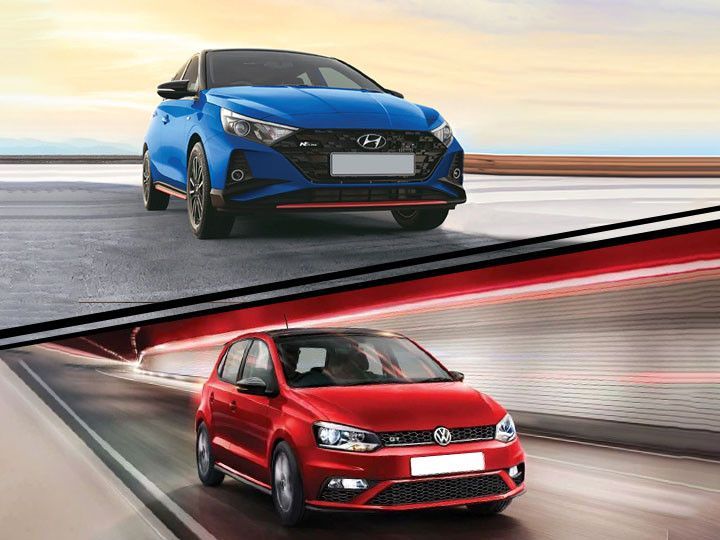 The hot hatch segment is starting to gain steam in the country with the launch of the Hyundai i20 N-Line on September 02, 2021. It’s only rival at the moment is the Volkswagen Polo GT TSI, which has been very popular since its inception about a decade ago. So the main question that we will be answering in this report is if Hyundai has done a good enough job to take on the Polo GT TSI.

To find that out, we’ll be comparing both the model’s powertrains, hardware, and features in this comparo.

Under the hood, both hatches come with a 1-litre turbo-petrol engine that drives the front wheels. The i20’s engine is the more powerful one here while the Polo’s unit is slightly torquier.

Both models can be had with an automatic transmission. However, Hyundai offers you the option of an iMT if you want to take matters into your own hands. And while the Polo GT doesn’t get a manual transmission, the lower-spec Highline Plus trim comes with a crisp 6-speed manual.

It’s no surprise that the Hyundai i20 is the more frugal model with better claimed efficiency numbers. Fuel efficiency aside, hot hatches are meant to have fun and the i20 N Line is quick with a 0-100kmph time in 9.9 seconds. VW hasn’t mentioned the claimed time, but according to our acceleration test, the Polo GT TSI manages the  0-100kmph sprint in 10.79 seconds.

Hyundai has done quite some work to differentiate the i20 N Line from the standard model. It looks sportier and gets a host of updates underneath the skin to go along with its looks.

The dampers are stiffer by 30 percent, the steering wheel has been retuned for more weight, and rear disc brakes are present for additional stopping power. Also, the hatch gets paddle shifters so you can take matters into your own hands for some fun. And last but not least, the throatier exhaust note tops up the hot hatch experience.

In stark contrast, the Polo GT only gets cosmetic updates in the form of GT badges and stickers on the outside. The hardware is exactly the same as the standard Polo, which is no bad thing as the VW is a tidy handler. But we feel VW could have provided it with paddle shifters or a sportier exhaust to truly emphasise that GT experience.

However, the i20 goes a step further and offers niceties like a fully digital driver’s display, push button start, a wireless phone charger, and a Bose 7-speaker sound system.

As evident from the table above, the i20 N Line trumps the Polo by offering four additional airbags and a tyre pressure monitor. Both models also get rear parking sensors and electronic stability control.

The i20 N Line is the larger car here in all aspects. Its wheelbase is a full 100mm longer than the Polo and that reflects on the inside. While the rear seats in the Polo are cramped, the i20’s are more accommodating.

Even though the i20 N Line is late to the party, it seems to have the right ingredients to take the fight to the Polo. But while the final nail on the coffin is the pricing, a big, and as yet unanswered question is how well does it drive. And considering we’ll be driving the newest Hyundai hot hatch soon, we’d suggest you stay tuned to ZigWheels!