The 401s will come later to India

Swedish bike maker Husqvarna has finally entered the Indian motorcycling segment with the Svartpilen and Vitpilen twins. However, these two motorcycles will be offered in India initially as 250cc models and not as the 401s sold abroad. This is similar to the strategy that KTM had when it made its debut in India in 2012 with the 200 Duke and followed it up with the 390 Duke. The Swedish bike maker will officially launch the 250s by the end of February next year.

The Svartpilen and Vitpilen 250s will be India-specific models and not sold elsewhere in the world. While the bikes have been unveiled at India Bike Week 2019, we will have to wait until early 2020 to know their launch details.

Much like the 401 twins, both the Svartpilen 250 and the Vitpilen 250 are based on a KTM motorcycle, in this case, the 250 Duke. Hence, you will find the same split trellis frame housing the 248.8cc single-cylinder engine which makes 31PS of power and 24Nm. The six-speed transmission does feature a slip-and-assist clutch.

You also find the same suspension and brake units as the 250 Duke. Hence, the front gets the 43mm USD fork while the rear diecast aluminium swingarm features a preload-adjustable monoshock. A 300mm disc with a Bybre four-pot radial caliper is found on the front wheel, while the rear features a 230mm rotor with a single-piston caliper. Dual-channel ABS comes as standard.

Swedish for ‘Black Arrow’ and ‘White Arrow,’ the Svartpilen 250 and the Vitpilen 250 are neo retro motorcycles. Of the two, the Svartpilen 401 would entice most Indian buyers as the urban scrambler setup entails an upright and comfortable riding stance. Being a cafe racer, the Vitpilen does have a slightly aggressive riding posture which might not be the best fit for our roads.

One of the major changes on the 250s to their 401 counterparts are the alloy rims. The 401s used a 17-inch spoke wheel setup, which when fitted with tubes inside will be a cause for concern in India. With alloy rims, Husqvarna is offering a more practical and convenient solution.

We expect the prices for the Husqvarna 250s to start from Rs 2.3 lakh onwards, the Vitpilen 250 being the more premium offering. Stay tuned for more details on the new Huskies. 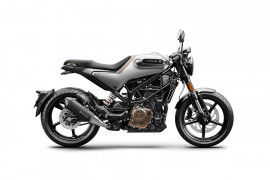 All Comparisons of Vitpilen 250