Do The Hornet 2.0’s Rivals Have What It Takes To Stir Its Nest?

Let’s see how the TVS Apache RTR 200 4V and the Bajaj Pulsar NS200 stack up against the newest entrant in the 200cc segment, the Honda Hornet 2.0 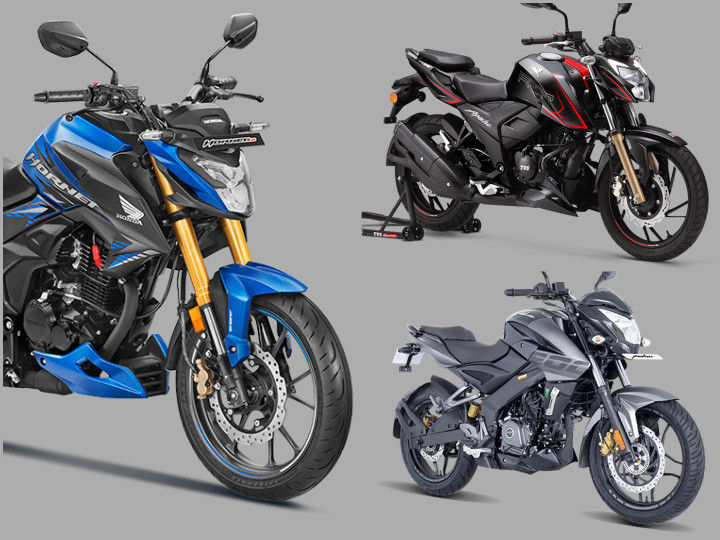 The Honda Hornet 2.0 is the brand’s first motorcycle in the 180-200cc segment in India. It goes up against the TVS Apache RTR 200 4V and the Bajaj Pulsar NS200. So where exactly does it stand amongst its competition? This specification comparison should help clear things out.

The Honda Hornet 2.0 has the smallest engine among the three and its power and torque figures are quite anemic. Instead of developing a 200-odd cc engine from ground up, Honda seems to have based the motor on the CBF190R that’s sold in the international market.

While the Hornet 2.0’s engine gets a roller rocker arm and piston cooling jet for friction reduction and thermal efficiency, the TVS Apache RTR 200 4V’s motor features a proper oil cooler for better performance. It also gets Glide Through Technology (GTT), which is essentially a low-rpm assist that ensures the bike crawl in traffic with just clutch modulation. TVS claims its ram-air assist reduces the engine’s heat signature by 10 degree celsius for enhanced efficiency. The Bajaj Pulsar NS200 gets a more advanced liquid-cooled engine linked to a 6-speed transmission, which should ensure better highway cruising capability compared to the other two motorcycles.

The Honda Hornet 2.0’s inverted front fork is more sophisticated than the conventional telescopic fork on the other two bikes. In fact, this is the first time Honda has equipped a made-in-India bike with an inverted front fork. As far as the braking department is concerned, the TVS Apache RTR 200 4V is the safest of the lot thanks to dual-channel ABS and rear wheel lift off protection.

It is also the only bike in this comparison to get a Eurogrip Protorq SR radial tyre for better sidewall stiffness. This translates into better cornering confidence, not to mention improved grip due to the stickier compound. The Hornet 2.0 gets the fattest tyres here, but the Maxxis units are not radial. Being the most powerful bike of the lot, the Bajaj Pulsar gets the biggest front brake but it only gets a single-channel ABS.

The slightly longer wheelbase of the Bajaj Pulsar NS200 should give it better stability on the straights. When it comes to taming terrain, the TVS Apache RTR 200 4V’s high ground clearance should ensure going over bad roads will be an easy and worry-free affair. Despite packing a liquid-cooled engine, the Bajaj Pulsar NS200’s kerb weight is just 3kg more than the Apache, which is pretty commendable. Meanwhile, the Hornet 2.0’s light kerb weight should make it easy to manoeuvre in the city.

As far as features are concerned, the Hornet 2.0 gets an all-LED lighting system whereas the Apache gets an LED headlamp and tail lamp. The Apache is also the most feature-packed motorcycle in this comparison, equipped with a full-digital instrument cluster with smartphone connectivity and turn-by-turn navigation. Its GTT feature should also make life easier on traffic-riddled roads. Apart from a semi-digital instrument console and an LED tail lamp, the Bajaj Pulsar NS200 has nothing noteworthy in terms of features.

While the Honda Hornet 2.0 is the most affordable of the lot, it isn’t exactly packed with features nor is it rich in performance. That said, it does look striking and will appeal to younger riders who are under a strict budget. If you’re willing to pay a bit more, you could get the TVS Apache RTR 200 4V that offers a great balance of both. The Bajaj Pulsar NS200 is perfect for those who prefer no-nonsense performance.