Honda jumps up a couple of segments for the larger Hornet 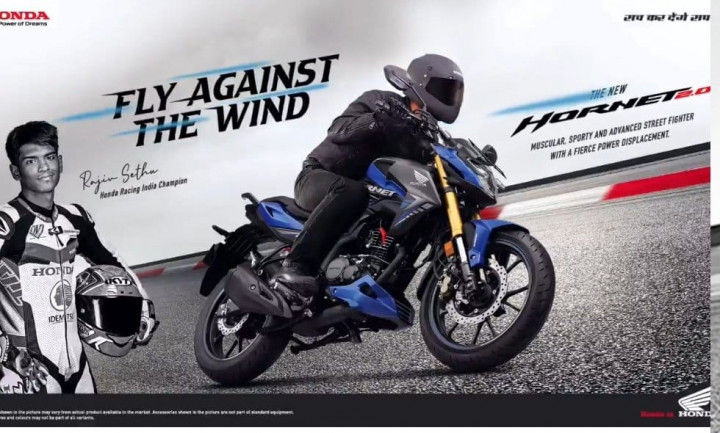 With inflating motorcycle costs and heavy saturation of the 160cc motorcycle space, it didn’t make sense for Honda India to have a third motorcycle in the space after the econo-centric Unicorn and the funky X-Blade. Thus, the Hornet has gained few cubes and now arrives in the 180cc-200cc segment. Welcome, the Honda Hornet 2.0, Honda’s biggest motorcycle that it makes in India. The new Hornet 2.0 is priced at Rs 1,26,345 lakh (ex-showroom Gurugram). Bookings for the new Hornet will commence shortly with Honda aiming to deliver the bike from early-September onwards.

Only a few months ago did we come to discover that Honda had patented the China-specific CBF190R in India. At that time, we guessed the bike could be the design inspiration for the 160cc Hornet, dismissing the possibility of getting something larger from the Japanese bikemaker. But as things panned out, the existence of a larger Hornet became more apparent and now we have finally got a larger Honda.

The styling hasn’t changed much from the CBF190R to the Hornet 2.0. Still, the new Honda naked looks quite familiar to its older 160cc sibling. The sharp body cuts and the chunky golden USD fork bring out the sporty vibe of the motorcycle. Honda is leading the charge with LED as all lighting systems get the modern lighting technology. It gets a blue-backlit digital console that displays info like an odometer, trip meter, gear position indicator, a clock and fuel gauge.

Powering this new Hornet is a 184cc single-cylinder air-cooled engine that dishes out 17.27PS and 16.1Nm. In comparison to other 200cc rivals like the TVS Apache RTR 200 4V and the Bajaj Pulsar NS 200, the Hornet is lower on performance. It seems like Honda wants to position the Hornet 2.0 as a middle ground between the current crop of 160cc and 200cc bikes.

This is the first made-in-India Honda to get a USD fork. Honda has certainly upped the ante with the addition of this premium suspension component with neither the Apache nor the Pulsar offering the hardware. A preload-adjustable monoshock is present but we guess it will be tuned differently to suit the new bike’s performance characteristics. Petal disc brakes are found at both ends with single-channel ABS coming in as standard. It retains wide-section tyres that are sourced from Maxxis but they are cross-ply tyres, no radial construction units.