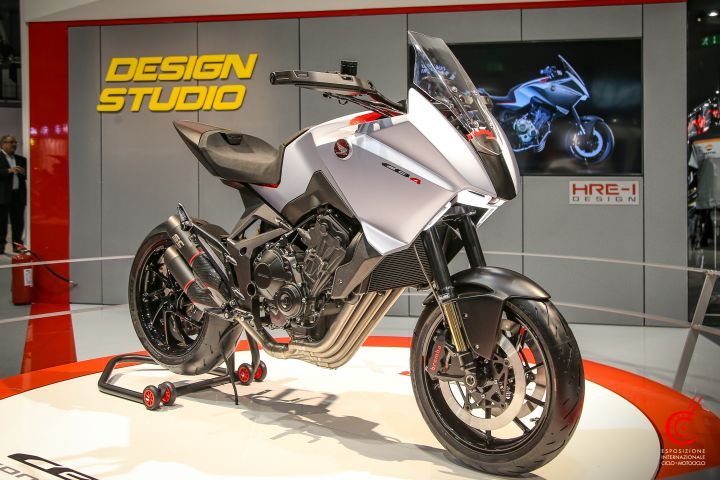 The stunning Honda CB4X concept that was first unveiled at 2019 EICMA may soon become a reality. Honda has filed patent images of the ADV which have now been leaked online. The bike, which inclines more towards the sportier side, teases the idea of an inline four-cylinder adventure tourer capable of munching miles while being equally agile in corners.

The CB4X is essentially a crossover between a sports bike and a tourer with an aggressive design language. The bodywork is minimalistic and features a slim LED headlight and tail light. The windscreen, which could be electronically controlled, sits flush with the fairing. The bike features a full-digital instrument console and may come with Bluetooth connectivity. While details are scarce, we know that the ADV gets an aluminium subframe and runs on smaller 17-inch wheels with road-biased tyres.

Another reason the CB4X qualifies as a road-biased adv tourer is because it gets an inline four-cylinder engine. You see adventure tourers are known to make use of V-twins, parallel twins and flat twins with more bottom-end torque that’s usually needed while off-roading. Inline four-cylinder motors, on the other hand, are known for their peaky characteristics. In essence, they make most of their power and torque higher up the rev range -- attributes that aren’t ideal while trying to overcome inclines and rough surfaces at slow speeds.

In terms of competition, we believe the CB4X is more likely to battle it out in the 900-1000cc road-biased adventure touring segment, which is currently occupied by the likes of the 2020 BMW F 900 XR, BMW S 1000 XR, and the Yamaha Tracer 900 in the international market. This is because Honda already has the CB500X and the NC750X to offer in the mid-displacement segment overseas, both of which are laid back adventure tourers. This leaves space for an aggressive, premium tourer like the CB4X.

Adding more weight to the matter is the fact that the concept showcased at EICMA featured premium components that aren’t usually seen on mid-displacement bikes. An adjustable suspension setup, Brembo calipers, SC project exhaust, and electronically adjustable windscreen should give you the idea.

Expect the bike to be showcased in its production form at EICMA this year or by 2021 if the COVID-19 situation takes longer to improve.