Honda CB-F Concept: All You Need To Know

All the dope on Honda’s latest headline-making concept 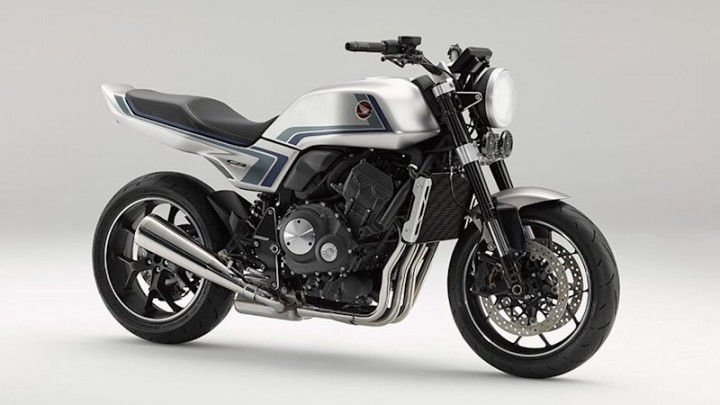 Honda likes to surprise us every now and then. The most recent instance was when it sprung the stunning CB-F concept on us a few days ago. Here are all the important details about the bike:

Derives Design Cues From The 80s

It may be a 2020 concept, but the design inspiration comes from many decades ago. Drawing on cues from iconic Honda bikes like the legendary CB750, the CB-F sports a retro design with a classic round headlight, large square-ish fuel-tank, and long single-piece seat.

Yes, it is an inline-4 just like the bikes it harks back to, but in this case, the motor in question comes from the Honda CB1000R. This means a 998cc liquid-cooled DOHC inline-4, which in the 1000R puts out 146PS and 104Nm. The engine is mated to a 6-speed gearbox via an assist and slipper clutch.

Not The Only Retro In Honda’s Lineup

With the current vintage revival movement we’re seeing in motorcycling, it’s unsurprising that the CB-F isn’t the only retro bike in Honda’s lineup. The CB1000R that it’s based on is a neo-retro, but more neo and less retro, while the CB1100 range sold overseas is a true-blue retro platform, complete with an air-and-oil cooled inline-4 and twin-pod analogue instrumentation. The smaller CB’s like the CB650R and CB300R also employ the same neo-retro design language as the 1000R.

Looks can be deceptive, they say. While the CB-F might appear old-school on the surface, it packs in some rather modern features underneath. Chief among these is a colour TFT display. Considering the firepower on offer, it’s more than likely that the CB-F features electronic aids like traction control as seen on the CB1000R. We can also be quite certain that Honda has thrown in the safety net of dual-channel ABS.

Back in the 80s, it was often the case that the chassis couldn’t keep up with the engine. With 40 years of technological advancements, that isn’t so much the case anymore. To help put down all that power, the CB-F is held together by a steel backbone frame suspended on an upside-down fork and monoshock. A single-sided swingarm puts the rear wheel proudly on display, though we wish Honda had gone for a more old-school wheel design.