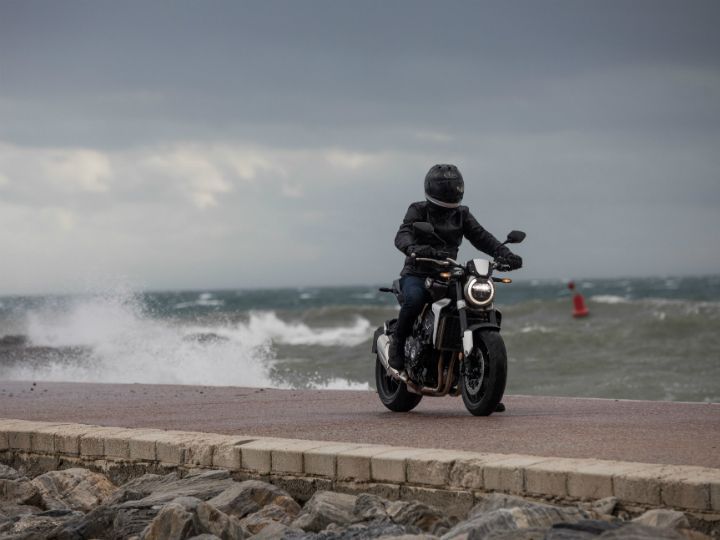 Honda has ended this year with a bang by launching the new CB1000R+ in the country. This is the Japanese brand’s only naked big bike in India, and has been priced at Rs 14.46 lakh (ex-showroom Delhi). The Japanese two-wheeler giant has opened bookings for the new offering, and it’s sold through Honda’s exclusive Wing World dealerships.

This CB1000R+ is considerably different from its predecessor which was on sale in India, but was discontinued a few years back. The earlier-gen bike catered to a more performance-focused audience, whereas the new one has a much more matured styling, but is well-balanced when it comes to performance, ergonomics and everyday usability. Here’s the complete lowdown on what this bike is all about:

Honda is selling only the “+” variant of the new CB1000R in India. This variant is essentially a fully loaded one, right from the factory. Honda has equipped it with standard fitments like a bidirectional quickshifter, a flyscreen and a pillion cowl with aluminium inserts, aluminium panels on the front fender and rear hugger, heated grips, and a radiator grille with ‘CB1000R’ logo.

It’s a fine balance of aesthetic and functional upgrades all rolled into one package. In the international market, additional accessories include alcantara rider and pillion seat, 12V socket, wheel rim decal, engine case protector, tank bag, tank pad, and a rear seat bag. However, these aren’t available currently and maybe Honda might introduce them in the near future.

There’s an aura of minimalism in the CB1000R’s design language, but the attention to detail is simply impeccable. The bike previews Honda’s ‘Neo-retro Sports Cafe’ design philosophy, which emphasises on textured metal elements instead of plastic bits. In fact, Honda says there are only six exterior parts made of plastic, with the biggest one being the front fender. The heavy usage of premium materials, also results in the new motorcycle being 12kg lighter than its previous iteration, at 212kg kerb.

Its instrument cluster is an LCD unit, and displays all the necessary information like rider modes, shift-up indicator, riding modes and eco riding indicator among others. The motorcycle features a full-LED lighting system which adds to the neo-retro appeal. While the layout of the console is pleasing, a TFT screen should have been provided at this price point.

Honda has even reduced the overhang of the headlamp by 90mm so that it gels well with the butch flangeless steel fuel tank. In a first for Honda, the brand has employed license plate holder on the tyre hugger, thus resulting in a short tail section that accentuates the fat 190-section rear tyre. Even the rear grabrails are discreetly tucked underneath for that clean look.

The Honda CB1000R is powered by a 2006 CBR1000RR Fireblade-derived 998cc DOHC inline four-cylinder engine. It has been tuned for a considerable increase in torque and power output, at 145.4PS and 104Nm compared to 125PS/99Nm of the older bike.

Honda says there’s a significant improvement in the torque curve, especially between 6000-8000rpm. This should ensure hair-raising acceleration, and will be a godsend for fast overtaking manoeuvres. Shifting up and down is hassle-free, thanks to the standard bi-directional quickshifter in the India-spec bike. The motorcycle also comes with an assist and slipper clutch as standard across all variants.

Safely putting the power down the rear wheel is a Throttle By Wire (ride-by-wire) system with three preset riding modes (rain, standard, sport) apart from a user configurable mode. This works in conjunction with three levels of engine power, engine brake and a switchable Honda Selectable Torque Control (HSTC) system. HSTC is essentially Honda’s jargon for traction control system. As far as fuel efficiency is concerned, in the WMTC mode, Honda claims 16.7kmpl, which is pretty decent for a litre-class naked.

You get a fully adjustable Showa Separate Function Fr Fork Big Piston unit (SFF-BP) and a Showa BRFC (Balance Free Rear Cushion) monoshock at the rear. Braking hardware consists of 310mm floating discs with radial calipers up front and a 256mm rear disc. There’s a standard dual-channel ABS in case things get slippery, however, it misses out on cornering ABS. The 17-inch wheels are made of cast aluminium and are shod with Dunlop Sportmax tyres.

What does it go up against?

All prices are ex-showroom Delhi. Compared to all these bikes, the Honda really stands out with its neo-retro styling, and is reasonably priced too, despite being a CBU.