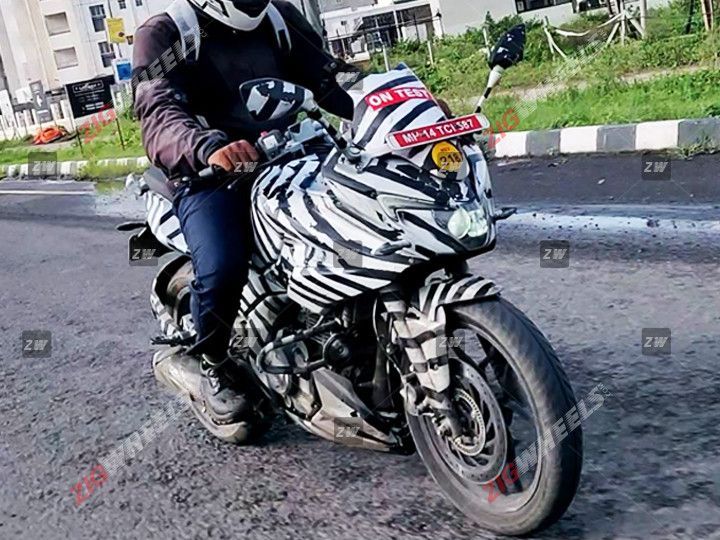 We’ve come across the upcoming Bajaj Pulsar 250F testing yet again in Pune. This comes just days after spy images of the bike were released online. However, this time around, the video we’ve captured gives us a comprehensive look at all the design updates on the bike.

To start things off, the new-gen Pulsar 250F will come equipped with an all-new LED headlight. This unit isn’t anything like the vertically stacked projectors seen on the current-gen 220F. It’s a single LED projector flanked by sharper LED DRLs. The entire front fascia looks a bit larger and taller than the existing model. Even the windscreen has been stretched for better wind protection. The conventional bulb turn indicators have been replaced by LEDs. It also gets a new engine cowl and rear-view mirrors.

View the bike from the side and you’ll notice the redesigned vents on the fairing that are now larger and more defined. The fairing also flows into the tank and doesn’t look like a separate piece. Its clip-on handlebars are positioned much higher for an upright and comfortable riding posture. The seat, despite being a split unit, has been designed to look like a single piece setup. The LED tail light also gets a new look. It tapers towards the end forming and 'X'. Bajaj has even shortened the rear fender for a sleeker look.

On the hardware side of things, you have the same telescopic fork but a new monoshock setup linked to box-section swingarm. The double barrel exhaust is similar to the Dominar 400, but looks more compact in design. To save costs, Bajaj has opted to use the same alloy wheel design and braking setup as the NS200.

The new 250cc single-cylinder mill, which gets an oil cooler, is expected to make more power than the 220F, so we could expect a slight bump in performance. Nothing substantial though.

The bike looks production-ready which leads us to believe it could be launched in August or September this year. We reckon a price of around Rs 1.32 lakh - Rs 1.34 lakh (ex-showroom) seems justifiable. At this price point, it will lock horns with the Yamaha FZS-25.