Ducati has unveiled the 2018 version of its flagship adventure tourer offering, the Multistrada 1200, at the 2017 EICMA motor show. On the design front, the bike is pretty much the same, except for the new side panels and integrated luggage mounts on the rear aluminium subframe. The main difference, though, is the bigger and more powerful heart. 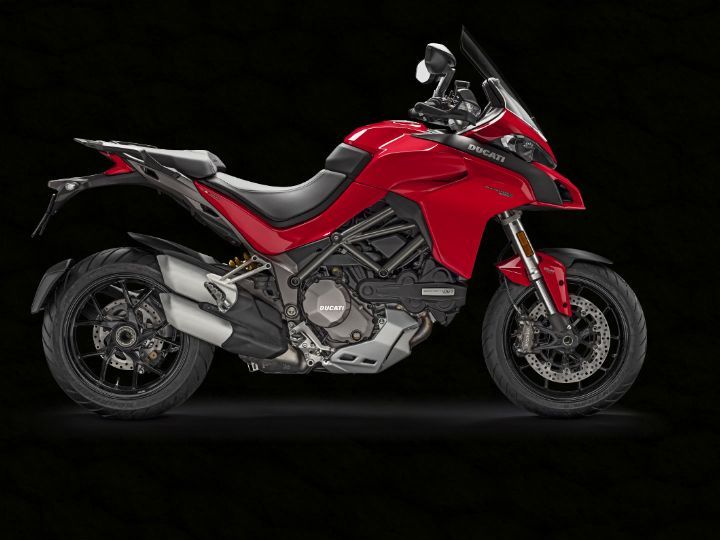 This new version sports a powerful 1262cc engine called the Testastretta DVT. The engine resembles the one that powers the XDiavel and has a similar bore and stroke too. The new motor is completely different than the one on the outgoing Multistrada 1200.
Over the years, Ducati’s Multistrada range has garnered a reputation for being badass machines both on and off-road. Ducati doesn’t fail to deliver this time either, with the new powerplant performing duties on the new 2018 bike. As a result, the bike now generates 129.5Nm of torque, which is a drop of 6.5Nm in comparison to the older model.

Staying true to its adventurous nature, the Multistrada 1260 offers great low to mid-range torque, making 85% of it accessible 3500rpm onwards. Further, it offers a peak power output of 158PS at 9500rpm, which is a drop of 2PS over the 1200.
The 2018 Multistrada 1260 will be up for sale in three different variants: Standard, 1260 S and the 1260 D-Air. The S and D-Air feature a bi-directional quickshifter that allows for easy clutchless shifting. On the standard variant, though, this tech is available as an optional extra.

Furthermore, all models including the standard one will be offered with ride-by-wire technology, keyless ignition, cruise control, cornering ABS and an 8-level wheelie and traction control. Just like the outgoing model, the standard variant will showcase an LCD instrument panel, while the S and the D-Air versions will sport a 5'' TFT instrument panel. The S version will also come with Bluetooth to control your smartphone from the screen. As is seen across the Ducati Multistrada range, there are four riding modes on offer, namely Urban, Touring, Sport and Enduro - differentiated via a different colour displayed on the instrument cluster.

The chassis, carried over from the Multistrada 1200, is held together by a trellis front frame, with two lateral subframes and a single-sided swingarm. The wheelbase is 55mm longer than the 1200, which indicates that the length of the swingarm has been increased. The steering angle has been increased from 24 to 25 degrees.

As for the Pikes Peak edition, in addition to the 5-inch TFT screen, cornering lights and the quick-shifter on the S and D-Air variants, this variant gets a race-inspired livery and lighter aluminium wheels. It will also feature Ohlins front forks and Ohlins TTX36 rear monoshock damper. The exhaust is courtesy Termignoni, and the front mudguard, hands-free cover and side panels are all made from carbon fibre. As a result, the Pikes Peak weighs in at 206kg, almost 3kg lighter than the standard version. We expect the new model to come to India later in 2018. Once launched, the Ducati Multistrada 1260 will compete with the Triumph Tiger Explorer and BMW R1200GS. Prices are expected to start from Rs 16.5 lakhs.