The Scrambler Icon Dark, which features a new matte black paint scheme, will be the most affordable model in the Scrambler range in India 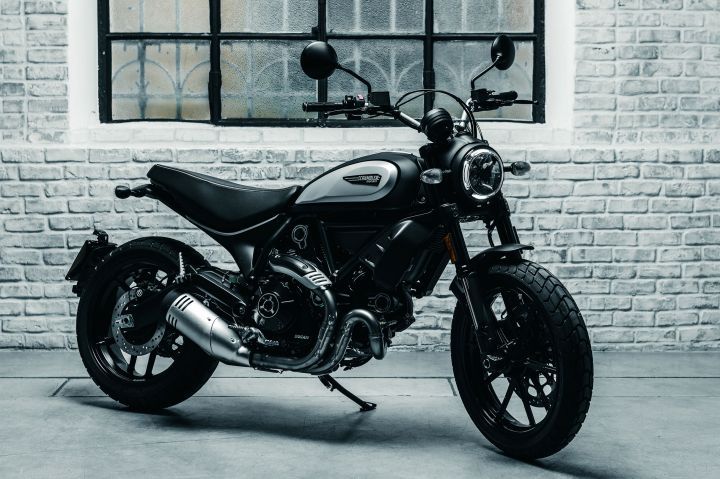 The 2020 Ducati World Premiere witnessed a couple of new launches which included the hotly-anticipated Streetfighter V4, a baby Panigale, the 2020 Panigale V4S and the Multistrada 1260 GT. The lineup also covered other updated models along with a new matte black colour option for the Ducati Scrambler Icon. It also gets a couple of cosmetic changes and is priced at £7,595 (approx. Rs 6.96 lakh) overseas, which is cheaper than the standard Icon variants.

To keep costs in check, the bike replaces the fancy rearview mirrors and LED turn indicators seen on the standard Icon with conventional round mirrors and traditional bulb indicators. The all-black colour scheme comprises blacked-out mechanicals, contrasting brush metal-finished aluminium tank panels and a stubby exhaust, which come together to give the bike a distinctive new look. Aside from the new paint scheme and the minor tweaks, the bike remains unchanged mechanically.

The Scrambler was also previously updated with new switchgear, adjustable levers and a full-digital instrument console, which gets Ducati’s Multimedia System as an optional extra.

It continues to be powered by an 803cc, L-twin, air-cooled motor that makes 73.41PS of power and 67Nm of peak torque. The motor works in conjunction with a six-speed gearbox. In terms of rider aids, the Scrambler comes equipped with cornering ABS as standard. This engine is still Euro4-compliant and Ducati has about a year to update the motor to meet Euro6 emission norms. However, in India, the industry will graduate to BS6 norms (equivalent to Euro6) from April 2020. If Ducati updates the Scrambler Icon Dark sooner, we can expect the bike to be launched in the subsequent months here. Otherwise, it is likely to be launched only in the second half of 2020.

Expect the new paint scheme to be launched in India by early 2020. The Scrambler Icon Dark is priced at £7,595 overseas, which is a full £700 cheaper than the Yellow and Atomic Tangerine colour schemes priced at £8,295. So, we can expect the same price difference— around Rs 64,000—to trickle down to the India-spec model when launched in the country.

But that’s not the end of the story. The Italian manufacturer also revealed renders of two new concepts from the scrambler range, which will be unveiled at EICMA this year.

The first model known as the Desert X is based on the Scrambler 1100. It takes its inspiration from the  Cagiva 1980s Paris-Dakar rally bike and features an all-new design complete with a half fairing, an engine cowl and a windscreen. The bike seems to retain its 19-inch front and 17-inch rear wheel configuration but gets a single-seat setup, a luggage rack, knuckle guards and a new upswept exhaust.

The second concept, on the other hand, looks like a supermoto, which uses the Scrambler 800 as its base. The render showcases the bike with raised fenders, semi-slick tyres, and a race-style number board.

The two bikes reflect Ducati's intentions of expanding the already comprehensive Scrambler range even further. So, make sure you stay tuned to ZigWheels as we will be bringing you all the action from this year’s EICMA, which will be held from November 5 to 10 in Milan, Paris.