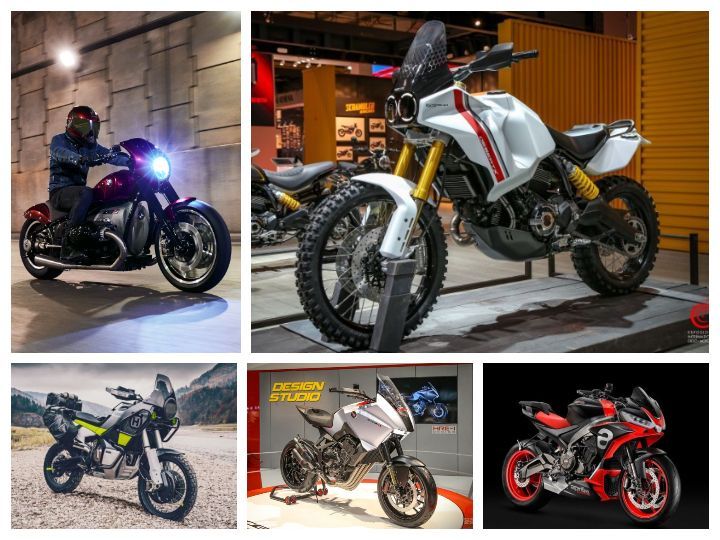 Not only is EICMA the ideal platform for motorcycle manufacturers to showcase its new products, it is also one of the best ways to showcase future concepts. Each year, we swoon over some delectable beauties shown on the Milan show floor and this year is no different. Hence, here is our list of 5 concept motorcycles that left us spellbound this year.

1. Ducati Scrambler Concepts
After the sketches were revealed at the 2020 World Ducati Premiere in October, Ducati showcased the life-sized versions of the concept motorcycles at EICMA 2019. Based on its highly successful Scrambler series, these two concepts have very different ambitions. The Desert X concept uses the Scrambler 1100 as its base as it takes design cues from the early Dakar racers from the 1980s. However, if you are not an off-roading junkie, Ducati also brought the Scrambler Motard. A supermoto concept, the Motard is ideal for those wheelie-loving hippies. Will either of these make it to production? We expect more clarity from the Bolognese brand at the World Ducati Week 2020 in July.

3. Aprilia Tuono 660
Aprilia is focusing greatly on the middleweight game for its growth. The RS 660 sportbike is a motorcycle that we are extremely excited to see on our roads. There were two other 660s at the event as well. While one of the two 660 concepts was shrouded in shrubbery, the Tuono 660 Concept was displayed in all its glory. A middleweight Tuono jostling it with the likes of the Dukes and the Triples of the world is exactly what we need.

4. BMW Concept R 18 /2
BMW’s next big boxer twin engine was showcased at the 2019 Concorso d'Eleganza Villa d'Este nestled in the frame of the Concept R 18. We hoped to see some production-ready version of the old school cruiser at EICMA but that was not the case. Instead, BMW delivered another tasty concept cruiser called the Concept R18 /2 (read as ‘Slash 2’). While the two concepts bear similar frames, it is clear that the R 18 /2 is the modern interpretation of a dragster motorcycle with high-end components. BMW has confirmed that a motorcycle based on this engine will come into production mid-2020.

5. Honda CB4X
Honda’s famous Rome R&D design studio has been consistently bringing radical design concepts to Milan for the past five years. In 2017, it brought the striking CB4 Interceptor and the CB125X ADV and the CB125M naked were revealed in 2018. For this edition of EICMA, we were treated to the CB4X Concept — a sport-touring concept with Honda’s inline four-cylinder engine at heart. The CB4X gets a top-heavy design which looks adventurish but has purely road-biased focus.