All The Enthusiast Bikes Launched In 2020

Here is a list of all the bikes between 200 and 700cc, including BS6 updates, that came to India this year 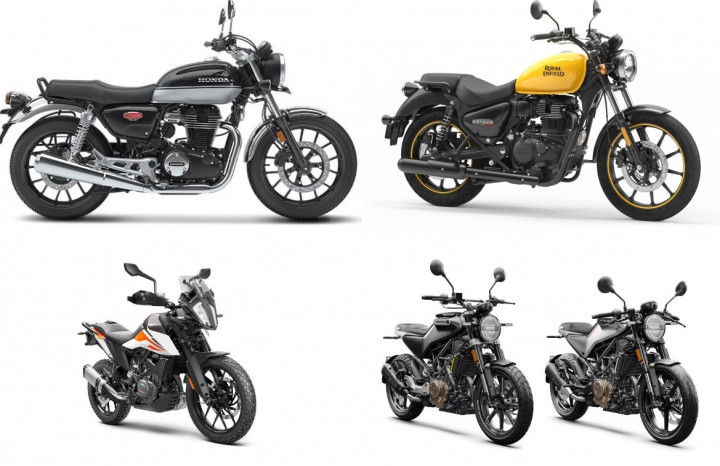 2020 has been a rough year for all of us. Heck, even automakers around the country had it pretty bad, with zero sales during the first quarter of this financial year due to the lockdown. Thankfully, they bounced back and us motorcycle enthusiasts did get our fair share of launches. Apart from all the BS6 updates, we also got a bunch of brand new enthusiast-focussed motorcycles. So here’s a list of all the bikes launched in 2020 that should give bikers around the country a reason to smile at the end of this crazy year:

Unveiled at India Bike Week 2019 in Goa, these two motorcycles are based on the KTM 250 Duke’s engine and underpinnings. The Vitpilen (or White Arrow) is a modern, minimalistic cafe racer take on the KTM platform, while the Svartpilen (Black Arrow) brings with it a scrambler aesthetic. While these don’t really live up to their cafe racer or scrambler designs with regards to their actual abilities, they are rather stylish and absolute head-turners wherever they roll-up.

It’s far from the perfect adventure motorcycle that all the hype had made us believe before it was launched, but the 390 ADV is a very capable tourer with decent rough road capabilities in the hands of most riders. Of course, in the hands of an expert off-road rider, it can really fly in the rough stuff. It packs some segment-leading goodies too, such as a quickshifter (albeit not a great one) and traction control.

Mechanically, the 250 ADV is absolutely identical to the 390 in every way except for its engine and sprockets. Those it borrows from the 250 Duke. In terms of features, it misses out on ride-by-wire, a colour TFT display, quickshifter and traction control. But it is about half a lakh cheaper. Those who aren’t enamoured with the 390’s mental performance would really love the 250 ADV as a great highway tourer.

Replacing the Thunderbird X, the Meteor is the first of many to be built on Royal Enfield’s new J platform. While it doesn’t bring a significant increase in horsepower over the UCE 350s, the jump in performance is undeniable. All this is possible thanks to a thoroughly modernised engine that features chain-driven overhead cams (as opposed to pushrods). But this Meteor is still a true-blue Royal Enfield with loads of low-down grunt and that intoxicating thump from its exhaust.

There is no question which bike Honda is taking a shot at with its new CB300. In fact, it has actually managed to make a better ‘thumper’ in many ways. Heck, even the name is a dig at its biggest competitor. It’s a pukka retro Honda, this, with its design harking back to the original CB750. But it’s got modern touches too - an LED headlight, Bluetooth connectivity, and even a very rudimentary traction control system. It’ll be really interesting to see whether this sovereign will be able to shift loyalists away from that other ‘regal’ bike.

The Dominar 400 is an amazing tourer, but it lacks character and has also become quite expensive over the years, putting it out of reach for enthusiasts on a budget. Thankfully, Bajaj has plugged the gap by launching the Dominar 250, and boy does it impress! We believe this is what the Dominar was always meant to be - relaxed with a refined motor, linear power delivery, and a suspension setup that glides over bumps. Head here for our complete review.

Ok, so these weren’t exactly all-new motorcycles, but they got enough of an update to get a place in this list. The Ninja 650 now gets the chunky Kawasaki family fairing design while the Z650 gets an LED headlight similar to the Z900. On top of that, they both get full-colour TFT displays with Bluetooth connectivity. Thankfully, even though the 650cc parallel-twin motor that powers both these bikes run cleaner in its BS6 avatar, it hasn’t lost an ounce of its performance, and even their weight gain has been absolutely minimal.

Apart from all the brand new bikes that we got in 2020, almost all other bikes in the country were updated to meet BS6 norms. They might have lost or gained a couple of horses or kilos, but essentially these bikes are inherently unchanged from their BS4 predecessors. Here’s a list of all the bikes between 200cc and 700cc that got a BS6 update.