250cc Royal Enfield In The Works?

Reports suggest that the cult bikemaker is working on a quarter-litre motorcycle to improve its fortunes. Here’s what we think about the reported move 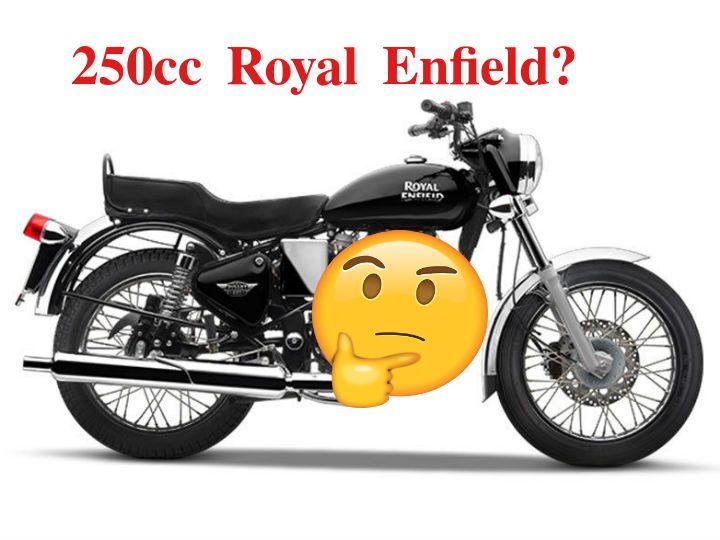 Various reports have suggested that Royal Enfield is working on a 250cc motorcycle. The bikemaker hopes the move will help it revive its fortunes, which have dwindled of late thanks to the rise in prices of motorcycles due to increasing insurance costs. The recent ABS updates haven’t helped matters either. Here’s why we think the 250cc Royal Enfield doesn’t make sense:

Royal Enfield already is working on a new-gen 350cc platform:

The existing 346cc engine is getting a bit long in tooth thanks to tighter emission norms as well as stiffer competition. Hence, Royal Enfield is currently testing out its new 350cc platform and there have been numerous sightings of the Classic 350 sporting the new engine. Royal Enfield has been working on this for quite a few years and the bikes with the new engine will be launched next year. Considering this, it doesn’t really make sense for the brand to go back to the drawing board and invest time and resources in making an all-new 250cc motorcycle.

Conflicts with the brand’s global ambitions:

Royal Enfield has been looking at gaining inroads into developed markets and until the 650 twins came into the picture, it did not have any highway-worthy motorcycles that could comfortably ply over high speed highways abroad. So if Royal Enfield made a quarter-litre bike, its business potential will be mostly restricted to the Indian market. In the best case scenario, Royal Enfield could export the bike to other developing markets as a beginner motorcycle. But that’s considering the possibility that the bike would be much lighter and beginner-friendly than its current offerings.

Balancing price and performance will be really challenging:

At present, the most affordable Royal Enfield, the Bullet 350, costs Rs 1.21 lakh. So it would be really tough for the brand to undercut the Bullet’s price. Moreover, if Royal Enfield carries over the not-so-sophisticated technology of the current 350cc platform to the new 250cc engine to keep the costs competitive, it would result in a severely anaemic performance. And the existing 350cc engine isn’t exactly known for exciting performance either.

Even if Royal Enfield made a quarter-litre bike with reasonable performance, it would end up being priced higher than the Bullet 350’s cost. And this wouldn’t sit well with the Indian customers’ perception that a smaller-capacity bike shouldn’t cost more than a larger capacity bike.

At present, the quarter-litre segment is pretty much populated with sporty motorcycles like the Yamaha FZ25, Fazer 25, Suzuki Gixxer SF 250 and the Honda CBR250R. The presence of these bikes is a clear indication that the audience in this particular space is looking for sporty and youthful motorcycles. So, if Royal Enfield brings about a retro 250cc bike in the country, it wouldn’t exactly fit well in the segment.

History behind the 350cc platform would dwarf the 250’s prospects:

For decades, Royal Enfield has been making its fortune out of its 350cc motorcycles. Understandably there’s a lot of history behind these bikes and the Indian customers can also connect the 350cc engine with the brand. So introducing a completely new 250cc motorcycle may not let prospective customers relate to the brand’s history. That said, the bikemaker has had a history of making 250cc motorcycles like the Crusader Sports and the Continental GT in the 1950s and 60s. However, Royal Enfield’s history in the quarter-litre space is not as rich as its 350cc offerings.