Apart from BS6 engine updates, the new Classic will also get alloy wheels and new colours 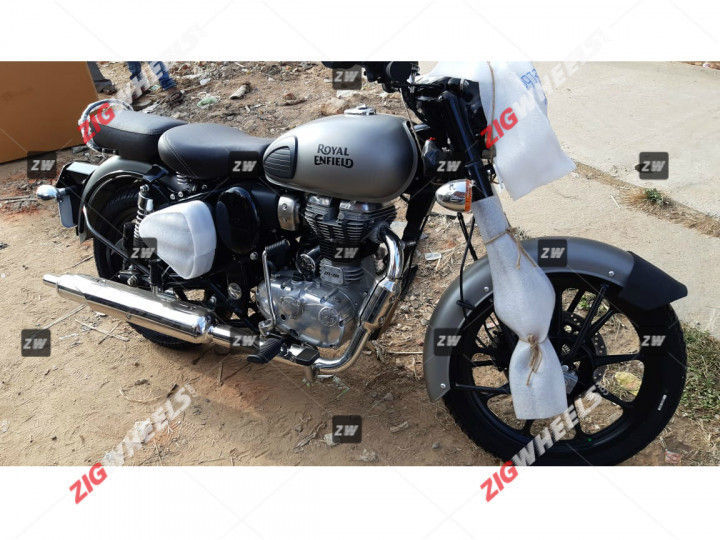 The biggest news in the motorcycling world at the moment is about Royal Enfield’s worst kept secret - the BS6 Classic 350. Yes, we were taken by surprise when the first units started arriving at dealerships last week, but since then, we’ve had a slew of pictures of the new bike, a likely launch date has been revealed, and we’ve even sneakily found out the price. So we’re in a pretty good position to tell you exactly what’s different about the BS6 Classic 350 compared to its BS4 counterpart.

Some Fresh Sets Of Clothes

The updates to the BS6 Classic 350 aren’t just mechanical - Royal Enfield will also be introducing two new colour options for the new bike. These are Stealth Black and Chrome, both of which are currently offered on the Classic 500. But while Stealth Black on the 500 is an all-black scheme, the 350 will get some red accents in the form of stripes on the side panels, logos and rim tape.

The Chrome scheme on the 350 appears to be quite similar to that seen on the 500, with the tank, fenders, battery box and air filter housing all getting a mirror finish. Within the Chrome edition, Royal Enfield offers two colours on the 500 - Black and Graphite, which affect the colour of the side panels, upper fork covers, headlight shroud and tank logo surround. It is not yet clear what Chrome colour options will be offered on the 350.

The Gunmetal Grey scheme is one such variant, as is the new Stealth Black option. The Signals editions and the Chrome edition will continue to roll on wire-spoke units, and it remains to be seen what wheels the Redditch and Classic X variants will get. The 9-spoke alloy wheels on offer seem to be the same as those seen on the BS4 bike’s online configurator.

This is a BS6 update, so the biggest changes are to the motor itself. The 346cc UCE engine is now fuel injected, while the BS4 motor was fed by a carb. An oxygen sensor is seen on the exhaust header, indicating that this is a closed loop fuel injection system.

An additional catalytic converter has also been added on the exhaust downtube to keep tailpipe emissions in check. We expect the addition of fuel injection to aid fuel economy, but it is likely that the motor has lost some power output. For reference, the BS4 bike produces 20PS.

Of course, all these updates have brought with them an increase in price for the BS6 Classic 350. But the increment is a little larger than we were anticipating. Our sources tell us that the Gunmetal Grey variant will retail for Rs 1,66,906, making it Rs 14,251 more expensive than the current model. The two new colour schemes will be priced at Rs 1,79,605 and will likely be the most expensive options in the range, alongside the Signals editions. The Classic X will be marginally cheaper than the Gunmetal Grey variant, and an official launch could happen as soon as tomorrow.