Only 1000 units of this special edition Scrambler will be made 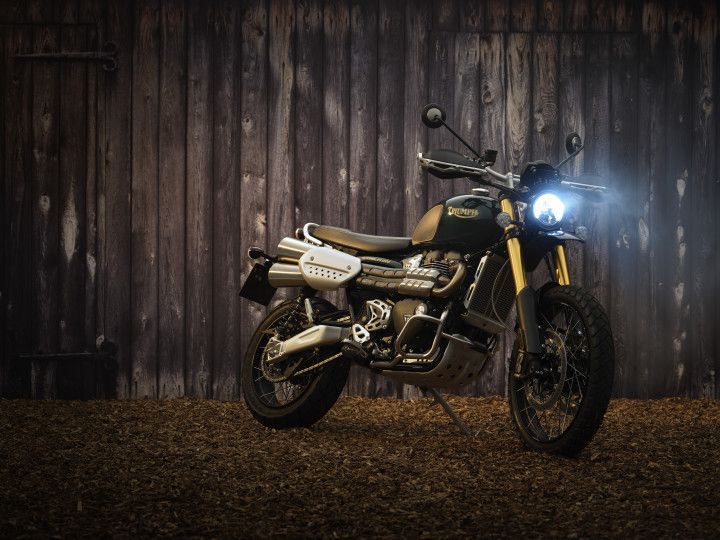 There are scramblers, and then there’s the Triumph Scrambler 1200. It is the most hardcore factory-built scrambler that money can buy. For 2021, Triumph has not fiddled around much with the Scrambler 1200, which still arrives in the XC and XE trims. Except for a EU5-compliant engine, the motorcycle remains pretty much like the bike we rode in 2019. The special bits arrive in a new limited edition model called the Scrambler 1200 Steve McQueen.

Named after the famous movie star and motorsport connoisseur, the Scrambler 1200 Steve McQueen edition is basically the 1200 XE but in a different set of clothes. It gets a unique ‘Competition Green’ tank colour. The knee-recess area gets a brushed metal finish with a hand-painted gold pinstripe. It gets an old school Triumph logo (also finished in gold) and dedicated Steve McQueen tank graphics.

It is completed with a Monza-style brushed aluminium fuel tank cover, a stainless steel tank strap, and a menacingly-high short aluminium mudguard painted in the same Competition Green shade. All these are inspired by the 1963 Triumph TR6 bike that McQueen used to jump over a fence and escape the Nazis in his movie ‘The Great Escape’.

The Steve McQueen edition gets standard features like engine crash protection, a premium brown bench seat with stitched ribbing, and MyTriumph bluetooth connectivity module that allows you to control your music and GoPro on the go.

On the regular XC and XE models, the 1200cc parallel-twin High Torque engine receives a new Scrambler tune. It makes the same 90PS and 110Nm as before, but these figures are produced at different rpms. Peak torque now kicks in at 4,500rpm, while max power is generated at 7,250rpm -- which is 550rpm higher and 150rpm lower, respectively. It shouldn’t make a big difference to the way the power is laid down. But thanks to the better spread of torque, you will notice that the motor is slightly more easy to use both within city limits and on trails.

Except for the small revisions to the engine, the Scrambler 1200 XC and XE models remain unchanged. The Thruxton-derived double-cradle frame houses the parallel-twin motor with adjustable-suspension at both ends. The XE, being the more off-road-capable motorcycle of the two, gets longer legs and a taller seat height. While both variants are anchored by high-spec Brembo M50 monobloc calipers, the ABS system on the XE model is aided by a six-axis IMU.

Features like full LED lighting, a TFT dash, keyless ignition, and single-button cruise control are standard on both trims. You will have to pay extra for the MyTriumph bluetooth module, though.

It is unlikely that Triumph will bring the XE trim to India. Earlier, the XC variant did go on sale here at Rs 10.73 lakh (ex-showroom). Considering how well Triumph has priced the bikes despite factoring in inflation, the Scrambler 1200 XE could retail at around Rs 11 lakh-Rs 11.25 lakh. The only other scrambler that comes close to matching it in off-roading is the Ducati Scrambler Desert Sled, which is has a smaller 900cc L-twin motor and is priced at Rs 10.89 lakh.

We are still unsure whether the Scrambler 1200 Steve McQueen trim will be brought to India. If it does arrive, expect it to retail around Rs 14 lakh.

The Triumph Scrambler 1200 is not for the faint-hearted. It looks smashing and comes with a beastly motor and some incredible components. While there are inherent flaws of the genre -- a high-rise seat and scrambler-style exhausts that cook your legs in rush-hour traffic -- the Scrambler 1200 has the capability to shame many large-capacity ADVs. The updates are intended to improve its all-round rideability. Will it attract more buyers this time round? That’s something which remains to be seen.