The Factory Works kit will boost the power of the flagship to 218PS, and also reduce the weight by over 9kg! 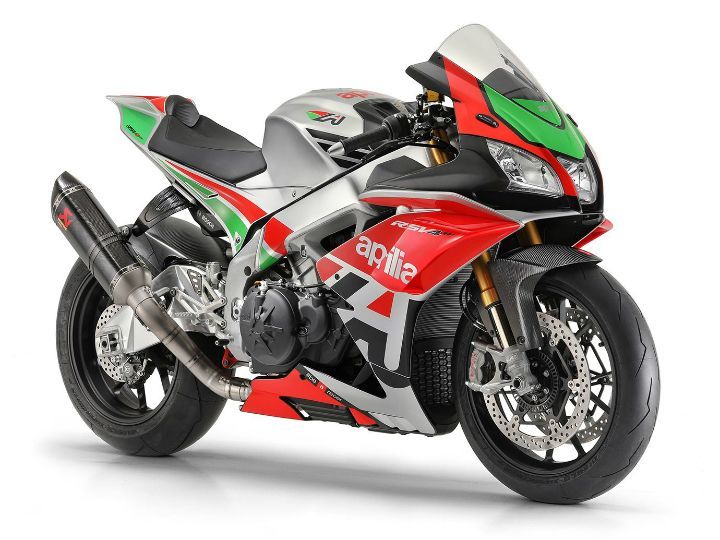 The stock Aprilia RSV4 churns out 184PS of power and 117Nm of torque! From the numbers itself, anyone can tell that the Aprilia RSV4 is already a scarily fast machine on the racetrack. However, if that's not enough to quench your thirst, the Noale-based company has announced a Factory Works kit for their flagship superbike at the 2017 EICMA motorcycle show.

The first thing that you will notice on the new Aprilia bike is the MotoGP inspired winglets, which Aprilia likes to call "Aerodynamic Appendages". It is developed by Aprilia Racing as part of the Aprilia RS-GP MotoGP bike program, which endows the motorcycle with GP-level aerodynamics. According to the company, they are integrated into the kit just to improve aerodynamics. We can’t help but drool at how they make the bike look so mean.

From this kit, you get tonnes of stuff to boost the power. This includes new cylinder heads, forged piston and a full Akrapovic race exhaust system as well. The result? Now you get full blown 218 horses between your legs, from the SSTK1 kit, along with the meatier exhaust note that adds a cherry on top. The SSTK1 kit doesn’t just boost the power output of the bike but also helps in shedding weight, which is very crucial when it comes to performance. Going against it will be Ducati's new offering, the Desmosedici Stradale engine-powered Panigale V4. This bonkers bike produces a mammoth 217PS of power and 120Nm of torque.

The kit has shaved a massive 9.7kg from the V4’s kerb weight. This has been achieved courtesy a lithium battery, machined-aluminium upper triple clamp, a different fuel cell, lighter fuel tank and a bunch of carbon bits sprinkled all over the motorcycle. So far, the company hasn't released the pricing of the kit. However, we don’t expect it to cost any lesser than your mortgage.