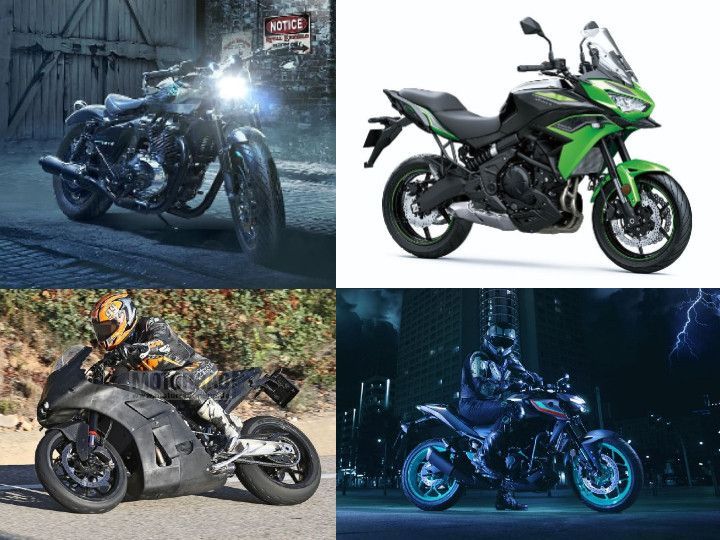 The last seven days had every two-wheeler enthusiast's adrenaline hitting the roof, thanks to the action-packed 2021 EICMA, which happened this week. Couldn't keep up with all of it? Well, lucky for you, here's our weekly news wrap of the top five stories of the week:

Here are our favourite picks:

Royal Enfield's SG650 concept was one of the exciting reveals at EICMA this year. The SG650 concept is a Bobber-like concept built by Royal Enfield, expected to serve as the blueprint for the upcoming Shotgun 650 and Super Meteor 650.

The SG650 is wrapped in a custom almost-pixelated silver and blue paint job, and it gets solid alloys, chopped fenders, and razor-sharp metallic indicators. However, most of these won't make it to the final model. Need more deets? Check out our story on the SG650 concept.

Aprilia stepped into the ADV scooter segment for the first time with its SR GT scooters at the 2021 EICMA. The ADV looks purposeful with its tall stance and rugged dual-purpose tyres. Additionally, it features LED illumination and LCD instrumentation, and it comes in 125cc and 200cc engine trims. Read all about it in our story.

Honda took center stage at EICMA, unveiling the 2022 CBR1000RR-R Fireblade and the all-new ADV350 adventure scooter. The former gets some much-needed tweaks (to set the race tracks on fire) along with a celebratory 30th-anniversary special edition. The ADV350 is an all-new offering boasting a meaty 330cc powertrain, traction control, LCD dash, and even dual-purpose tyres.

All details in our story.

Kawasaki finally listened to its fans and updated the ageing Versys 650 with new styling, all-LED lights, traction control, and a TFT instrument cluster. The new Versys was accompanied by Kawasaki's debutant in the radar-equipped category of bikes, the 2022 H2 SX SE. Check out all details on the Versys 650 and H2 SX SE, which are Indian-bound next year.

Speaking of debuts, MV Agusta unveiled the Lucky Explorer prototypes at the 2021 EICMA. The company's first adventure bike comes in two trims: 9.5 and 5.5, with the former boasting a 900cc triple-cylinder heart. The other gets a 554cc twin-cylinder engine, a fruit of MV's partnership with QJ Motors.

This was a much-awaited offering by Benelli. The TRK800 is the company's flagship ADV, which gets a radical design, all-LED illumination, a Marzocchi suspension, and an adjustable windshield. Even a 7-inch TFT is on the cards. Sounds interesting? We assure you it gets better in our detailed story on the Benelli TRK800.

BSA, the veteran two-wheeler maker, is set to make a comeback in the UK on December 4 with a new offering, details of which you will get in this story.

Earlier this week, an interesting full-faired KTM bike was spotted doing the rounds overseas. And we have reason to believe it's an upcoming supersport based on the popular KTM 890 Duke. Curious to know why? Here’s the answer.

Honda To Take On Royal Enfield With New 350cc Bikes

Honda India president Atsushi Ogata has revealed that the company plans to introduce new 350cc bikes in the next three years, primarily to take on Royal Enfield and Jawa. Also, the bikemaker plans to increase the number of BigWing dealerships in India from 70 to 300.

The Yamaha MT-03 has been updated for 2022. It now adheres to the strict Euro-5/BS6 norms and gets a new Cyan Storm colour. The latter wraps the bike in a dark grey shade contrasted by rich cyan-coloured wheels and graphics, making it more of a streetfighter than ever.

Along with this, Yamaha paid a fitting tribute to legendary MotoGP rider Valentino Rossi, gifting him a one-off WSBK-spec YZF-R1 wrapped in special VR46 graphics. There's a whole list of top-shelf components tucked under the carbon fibre fairings, and here's a detailed breakdown of them.