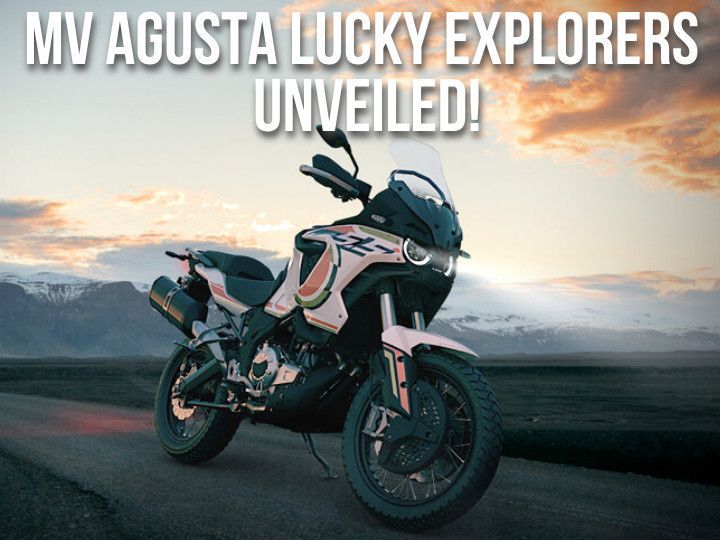 After giving us a handful of upmarket sportbikes and streetfighters, MV Agusta now plans to ‘explore’ other categories, particularly the adventure space. And to that end, the company has taken the wraps off two new ADVs -- Lucky Explorer 9.5 and Lucky Explorer 5.5, at the 2021 EICMA.

The Lucky Explorer twins get a rugged design inspired by the iconic Cagiva Elefant Dakar bike, and they come with forged carbon fibre parts, handguards, a tall flyscreen, and a huge bash plate. While both have identical silhouettes and livery, the LED headlights and exhausts are different. The Lucky Explorer 5.5’s fascia resembles a certain Honda ADV.

With that out of the way, let’s dive into the details:

The Lucky Explorer 9.5 is the flagship MV Agusta adventure bike. It is powered by a 931cc inline-three (derived from the MV Agusta Brutale 800 and F3’s engine) claimed to churn out 125PS and 101Nm. You can opt for a six-speed manual gearbox or an automatic unit.

On the tech front, the Lucky Explorer 9.5 packs cornering ABS, rear-wheel lift mitigation, launch control, cruise control, and eight-level TC -- all these accessible via a 7-inch TFT with Bluetooth and WiFi connectivity.

The Lucky Explorer 9.5 rolls on 21/19-inch spoke wheels, and it’s sprung on a 50mm Sachs electronic USD fork and a Sachs electronic monoshock -- both with remote adjustability for rebound, compression, and preload. The former offers a massive 220mm travel while the latter gets 210mm travel.

Unlike the 9.5, the Lucky Explorer 5.5 is a product of MV Agusta’s partnership with China’s QJ group, the parent company of Benelli.

Being a more accessible offering, it employs a 554cc twin-cylinder engine (mated to a six-speed gearbox), putting out a claimed 47PS and 51Nm.

The baby Lucky Explorer is sprung on a 43mm USD fork and monoshock, both adjustable and sourced from KYB. You get Brembo brakes at both ends and 19/17-inch (F/R) spoked alloy wheels.

That said, the two are only prototype models yet, and MV Agusta hasn’t revealed any official launch date or prices, for that matter. But we expect to see their production versions sometime next year. Nevertheless, since MV Agusta isn’t present in India, chances of us getting these are bleak.