Is Honda's retro 50cc scooter better than our homegrown and trusted Activa? 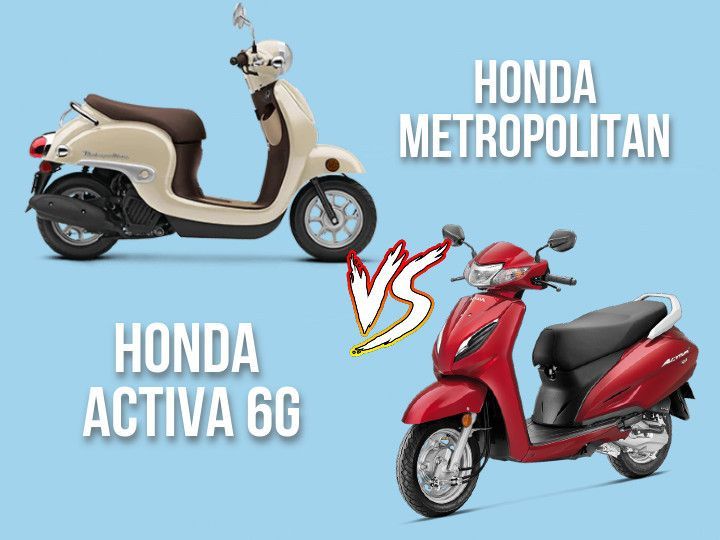 The Honda Activa has seen six iterations since its first unveiling. And in all these years, it’s fended off some very stern competition, maintaining its strong sales numbers. What could give the Activa a run for its money here, though, is another Honda called the Metropolitan, which is sold in International markets and looks quite appealing. Wondering how these two fare against each other? Here’s some help:

Looks are subjective, but even Honda Activa fans will agree its design feels a little aged. The current Activa’s flowing lines, though likeable, are not too far a deviation from the first ever Activa and are starting to show their age.

On the other hand, the Honda Metropolitan does things in a different, more retro manner. The overall silhouette is Vespa-ish, which coupled to the chrome mirrors, headlamp nacelle, indicators, and grab rail, lend it a more premium appeal.

Speaking of premium, the Metropolitan gets black alloy wheels out of the box, while the Activa 6G comes with steel wheels as standard.

However, the Activa 6G claws some points with its all-LED headlamp and apron-mounted pilot lamps, which enhance its front profile.

Features aren't a strong suite for either of these scooters, but both come with their plus points.

Except for the LED headlamp, the Metropolitan gets all these bits too. However, it edges ahead of the Activa thanks to its two extra storage spaces, alloy wheels, and semi-digital instrument cluster.

Coming to suspension, both scooters employ a telescopic fork up front. But the Activa gets adjustable twin shock absorbers at the rear, which should do a better job than the single, non-adjustable shock on the Metropolitan.

Both scooters are only offered with drum brakes at both ends with CBS, so no differences there.

Power deficit aside, the Metropolitan comes out as the more easy-going scooter here, thanks to its low 720mm seat height and 80kg kerb weight, 45mm and 26kg less than the Activa 6G.

In conclusion, there’s no doubt the Metropolitan has excellent potential for our market. However, it costs Rs 1.9 lakh in the USA, more than double of what the Activa 6G retails for here. And since the Activa brand name is already super popular in India, Honda will probably never risk sabotaging it by bringing in another scooter that does the same job.