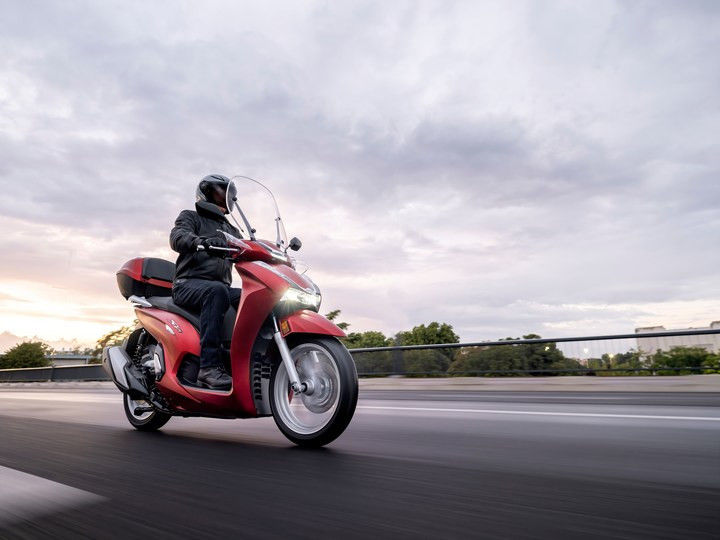 Earlier this month, Honda Europe released a teaser of the SH350i scooter, the evolution of the popular SH300i. Now, the brand has pulled the wraps off the sporty scooter and it does more than just meeting the new emission norms.

Replacing the 279cc single-cylinder engine is the new 330cc mill that we already saw on the 2021 Forza 350. The engine now uses a 77mm bore instead of the 72mm unit and a 70.7mm stroke rather than 68.5mm. The engine output now stands at 29.2PS and 31.5Nm, a boost of 5PS and 6.5Nm over the outgoing model. The new engine also features a lighter crankshaft, a bigger throttle body along with new inlet and exhaust ports.

Complimenting the new engine is the thoroughly updated design with a reverse-raked LED headlamp that sits below the indicators. The twin LED DRL housed in the indicators are now replaced by a single unit that sits on the top, giving the scooter a sharper look.

Honda has also loaded the new SH350i with features. In addition to Honda Selectable Torque Control (HSTC) or traction control and ‘Smart Key’ proximity key system that operates the ignition and underseat storage, the scooter also gets an all-new LCD console, USB charger, and an emergency stop signal feature that flashes the rear indicators in case of hard braking.

The Japanese brand has also reworked the steel underbone frame, shaving off 1kg in the process. However, the bigger engine and added equipment have shot up the scooter’s weight from 169kg to 174kg. The SH350i has retained the 16-inch wheels and the twin disc setup from the previous model.

Customers can also opt from an array of accessories including a windscreen, handguards, a 35-litre top box along with heated grips and a scooter blanket for year-round usability in the European weather.

While the Forza 350 is expected to grace Indian shores next year, the SH350i is highly unlikely to be launched in India.