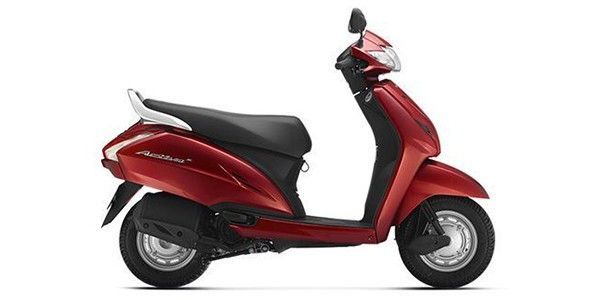 With the Activa already setting the sales chart on fire for years, Honda plans to bolster its position in the market with the new updated model, the Activa 3G. The scooter is priced at Rs. 49,517 (Ex-showroom, Delhi.) Powered by a Honda Eco Technology (HET) 110cc engine giving out a mileage of 60 kmpl, the scooter will be light on the pocket when it comes to fuel bills. The engine gives out 8 bhp of power and 8.8 Nm of torque. The scooter also features Combined Braking System (CBS) as an optional fitment. The scooter comes with five colour options
Read More

Honda has passed on the GST benefits to its customers and prices for its two-wheelers have dropped between Rs 300 and Rs 700 depending on the state of purchase.Honda India has launched the fourth generation of the popular 110cc scooter and have named it Activa 4G. The Honda Activa is the highest selling automatic scooter in India and has almost 58 per cent market share in the scooter segment. The new Honda Activa 4G has been priced at Rs 50,730 (ex-showroom, Delhi) which is Rs 440 more than the Activa 3G. The Honda 110cc scooter is now BS-IV emission norm compliant and also gets AHO (automatic headlamp on) feature which will soon become mandatory on all new two-wheelers. The Activa 4G also gets mobile charging socket which is an useful addition along with retractable front hook. The apron has been slightly redesigned and the new Activa also gets two new colour options - Matt Selene Silver Metallic and Matte Axis Grey Metallic.
Mechanically the engine remains unchanged and the scooter is powered by the same 110cc motor as seen on the previous scooter. The single-cylinder engine delivers 8PS of power and 9Nm of peak torque. Suspension duties are handled by trailing link suspension at front and a monoshock unit at the back. Drum brakes providing braking pwer and the Activa 4G gets Combi Brake System (CBS) as standard feature alongwith tubeless tyres. The Honda Activa 4G competes against TVS Jupiter, Hero Maestro Edge, Yamaha Alpha and Suzuki Lets.
Read More

The Honda Navi has come in as a trendy option for the youngsters buying their first two-wheelers. But, at a similar price, where does it stand against the established scooters like the Honda Activa?

We take five of India’s best offerings in the 110-cc segment to settle the big debate once and for all: Which is the one worth putting down your moolah for?

The Honda Activa 3G is the latest iteration of the most popular automatic scooter in India. Can the new scooter live up to the legacy of its predecessor? We get you the answer