Two different motorcycles, but at an almost similar price point and the same purpose – touring. So which one should you buy? 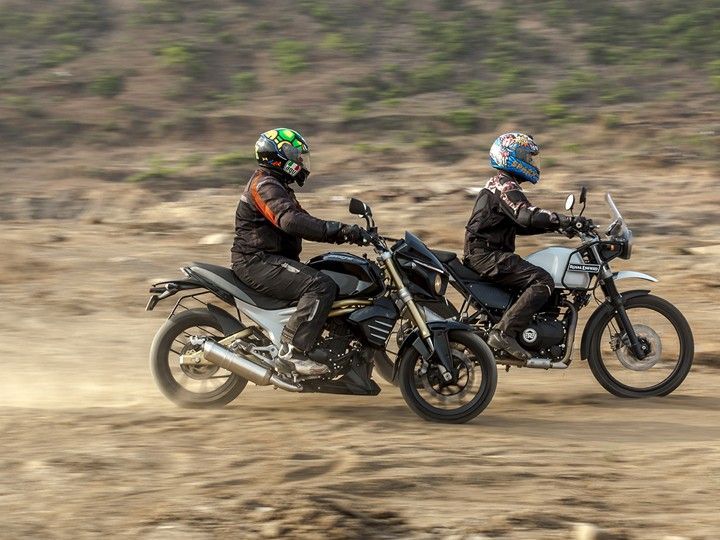 Motorcycle touring has garnered lot of popularity in the past few years in our country. Be it riding to Ladakh or a short breakfast ride of a few hundred-odd kilometres, bikers are venturing out and exploring more and more destinations on two wheels. While the number of people wanting to tour on motorcycles has increased considerably, the options have sadly been limited. Gladly though, the situation is changing and, last year, we saw the Mahindra Mojo making its debut in the Indian two-wheeler space. We recently rode the bike to Goa from Mumbai and came back impressed as it ticked all the boxes for being a good highway muncher.

Royal Enfield is the de facto brand with respect to touring for majority of the bikers in our country. But despite its popularity it really never had the best touring product in its portfolio barring the Thunderbird. But all that changed with the introduction of the Royal Enfield Himalayan, the first homegrown adventure touring motorcycle.

First let’s talk about the Mahindra Mojo. It has been part of our long-term fleet for a while but that hasn’t changed my feelings on the way it looks. The proportions of the motorcycle are way off with that unnecessary large headlight casing and a too petite tail section. But like most Mahindra products, both two and four wheels included, the styling seems to have clicked with the masses while we scribes never seem to like their design language.

The Mahindra Mojo is an attention grabber owing to its large dimensions but a pretty motorcycle it isn’t. Industrial is the first word that springs in my mind when someone asks me to describe the styling of the Royal Enfield. The bike is purpose-built, with function getting prominence over form but, still, the end result is a striking looking bike with the adventure tourer ethos. Despite the lack of design flair, the Himalayan has an aura of maturity about its lines and, especially in the Snow White shade, it does look good.

Both the motorcycles get equipped with a semi-digital instrument console. The unit on the Mojo is snazzier, with shift light indicator, illuminated tachometer, and top speed recorder along with the regular details like fuel gauge, speedometer, trip meter, hazard lights and odometer. The instrument console on the Himalayan is purpose built and looks rugged in its form. It gets goodies like temperature gauge, compass, average speed recorder and service indicator.

The Mojo’s console felt easier to read on the go whereas I personally feel that the tachometer on the Himalayan should have been a bit larger. Switch gear quality on both the motorcycles is impressive with the Mojo getting the benefit of backlighting. The Royal Enfield Himalayan gets optional extras like jerry cans, soft saddle bags, louder exhaust and aluminum panniers while standard fitment includes windscreen and MX-style claw footpegs.

Powering the Mahindra Mojo is a 295cc displacement single-cylinder motor churning out 28PS at 8,000rpm and a peak torque rating of 30Nm at just 5,000rpm. Push the starter and the mill comes to life with a good bassy exhaust note from the dual muffler. Acceleration of the Mojo is faster than the Himalayan as the bike gathers momentum at a brisk pace. The sweet spot for the engine is between 100-130kmph which makes it a great bike on the highway. Another interesting feature of the Mojo is the refinement of its engine which is much better than the Himalayan. High speed stability of the motorcycle is also impressive while the 6-speed gearbox works like a charm. The new long-stroke engine is among the most talked-about aspect of the new Himalayan.

The 411cc motor develops 24.8PS of max power and peak torque rating is 32Nm. The first thing one notices about the Himalayan is the refinement of the engine which is leaps and bounds better than its siblings, along with the free revving nature of the motor. Performance isn’t breathtaking for a 400cc displacement motor but the availability of torque at lower revs gives it the punch which is useful in city riding. I personally feel that the engineers should have extracted a few more horses from the engine as the bike starts losing steam post 110kmph which affects its cruising ability on the highway.

Also the new motor doesn’t have the thump that one usually associates with Royal Enfield powerplants, something that won’t please the loyalists. Another disappointment is the 5-speed gearbox which is crude by nature and needs lot of effort to slot into gears. The Himalayan also faced cold starting issues in the sweltering heat of Mumbai and our test bike also had a tendency to shut off while shifting down from second to first gear. Overall, with respect to performance and engineering refinement, it’s the Mahindra Mojo that’s the wins the battle.

Both the motorcycles offer an upright and comfortable riding posture but the one on the Himalayan feels better as you sit a bit taller and get a better view of the road. The Himalayan can look a bit intimidating for shorter riders but the scooped-out saddle means that the seat height is 800mm (Honda Activa is 765mm). Show the duo some corners and it’s the Mahindra Mojo that feels more enthusiastic in attacking them despite the poor weight distribution as the supreme Pirelli tyres comes to its rescue. It isn’t the most confident inspiring bike around bends but the rider has to trust the tyres and carry speed. The knobby tyres somehow restrict the performance of the Himalayan on tarmac but more than makes up for it on off-road sections.

As expected the Mojo was struggling on the trails and the tarmac specific tyres wasn’t helping the cause either. The Himalayan, on the other hand, was in its zone and will paste a wide grin on the rider’s face with its off-road ability. What makes the Himalayan more likeable is the fact that unlike other burly adventure tourer bikes it is compact and nimble which is perfect for riders like me who are learning the ropes of riding the bike off tarmac. Standing on the bike feels natural and one can easily hold the tank as you negotiate gravel, sand, potholes, boulders or whatever the surface is.

The long travel suspension of the Himalayan lets the rider be a hooligan as you can jump over surfaces and be assured of a composed landing with the large 21-inch front wheel and 200mm travel in the telescopic front forks and 180mm travel in the rear monoshock unit. Despite being in unfamiliar territory we must point out that the ride quality of the Mahindra Mojo is impressive as it rolled over undulations and potholes easily even with the Pirelli rubbers struggling for grip. Both the bikes employ disc brakes on both ends and have skipped ABS. Braking performance of the Himalayan felt marginally better owing to better bite but the rider needs to put in more effort on the lever.

Both the bikes aren’t restricted to be used only on weekends and can be used for your daily commute to the workplace as well. In cityscape, it’s the Himalayan that feels nimbler on its feet despite the fact that it weighs 15kg more than the Mojo (165kg). This can be credited to its better weight distribution and slicing your way through traffic was a joy, while the Mojo struggles a lot at low speeds as the front feels very heavy. The liquid-cooling system on the Mojo worked marvelously while the Himalayan’s motor did get heated up a bit while riding in traffic.

The tall side stand means that the Himalayan takes lesser parking space and it’s also easier to pull the bike out from the parking lot, while on the Mojo one needs to muscle it out. Talking about fuel efficiency, the Mahindra Mojo returned us an overall figure of 27kmpl which, with its gargantuan 21-litre fuel tank, results in a real world range of 570km. The Royal Enfield Himalayan fared better at 33.5kmpl overall which results in an average of 502km on a tankful.

The Himalayan has a split seat which means there’s more space for the pillion rider which isn’t the case with the Mojo. Since both the bikes are new to the market, reliability remains questionable in the long run. The Himalayan has a carbureted motor that is easier to fix than the FI unit on the Mojo and the fact that parts of RE products are more easily available than Mahindra can be a boon while touring in remote locations. But previous RE products aren’t renowned for their reliability, like leaking oil seals and gaskets, which we hope have been rectified in the new powerplant.  The headlight on the Himalayan performed better with good luminance but the headlamp is a fixed unit and one needs some time getting used to it.

Both the bikes are meant to cover long distances in a fast and comfortable manner. The Mahindra Mojo is more suited to the tarmac and can ride over a bit of trails in an effortless manner. The powerful motor and good list of features does make it a proposition for young executives who want a stand-out product. The Mojo could have been a good option for mature riders as well, but it can be quite a handful for them while riding in city traffic. Also, while the RE looks ready for the wild, the Mojo looks a little more domesticated and a good option for buyers who are looking for a large capacity motorcycle under Rs 2 lakh.

The Himalayan, on the other hand, has a larger target base: first comes the lot of existing Royal Enfield owners who like touring and are ready to step aside from tradition a bit. Then there is the large chunk of buyers who were waiting for a useable and non-intimidating adventure tourer motorcycle that doesn’t cost a fortune to own. The Himalayan has a wider appeal, from college students who want a standout motorcycle to motorcycle wanderers and mature riders who want a comfortable bike. The fact that it has the Royal Enfield logo on the bike further increases its appeal.

Let’s talk money first: the Royal Enfield Himalayan has been priced at Rs 1.55 lakh while the Mahindra Mojo will set you back by Rs 1.63 lakh. (Both prices are ex-showroom Delhi). In terms of pricing, there’s hardly anything noteworthy between the two motorcycles. So which bike won? Well, the answer is the Royal Enfield Himalayan, owing to the fact that it performs its purpose in a better manner than the Mojo.

The Himalayan will also be an easier bike to fix given its simplicity, and Royal Enfield also enjoys better dealership spread than Mahindra. Also, the fact that the Himalayan can be ridden in any terrain along with city traffic in equal ease makes it a better all-round product in my opinion. And this “go anywhere nature” is exactly what one expects from a touring motorcycle when you want to wander and explore the beauty of our motherland on two wheels.