All-new design, new engine and the lightest bike in its class – the 125cc motorcycle segment. We take a quick spin on Yamaha India’s newest 125cc commuter motorcycle Saluto – tipped as an alternative to the bestselling Honda CB Shine 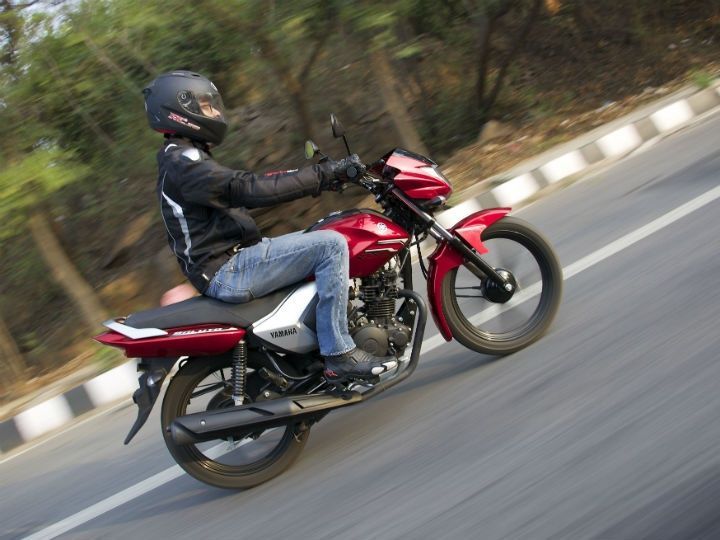 Let’s face it. Yamaha India isn’t known for its commuter bikes. And Yamaha India’s existing line-up of products in the 100cc and 125cc segments hasn’t quite set the sales charts on fire. In India, Yamaha has established itself more as a manufacturer of sporty, high quality, aspirational bikes – like the popular 150cc FZ series and the YZF R15, which have spawned a fan following and reversed Yamaha’s fortunes in India.

These days, however, together with performance, the Indian consumer also desires respectable fuel consumption figures. And this is more important in the sub-150cc segments.  Just a fan base and cult following doesn’t always make business sense, as Yamaha India seems to have realised. In the Indian two wheeler market, the high volumes game is where the bets are to be placed, and the Saluto could be Yamaha’s latest trump card to win some numbers in the commuter segment – at least the 125cc segment to begin with.

At first glance, this 125cc Yamaha looks pleasant, and in the Victory Red shade of our test bike, it even looks attractive. This is a completely new design with a new front cowl with windscreen, new muscular sculpted fuel tank with graphics boldly displaying the ‘125cc’ heart and simple, yet good-looking side panels displaying the Yamaha and Saluto brandings.

Take a step back for a second glance and you’ll realize that the overall design isn’t pathbreaking and the Saluto may not be what you would call ‘a headturner’. That’s not necessarily a bad thing, because Yamaha is marketing it as a ‘practical family motorcycle’. But to be fair, the typical 100-125cc consumer certainly puts a lot of emphasis on looks and overall styling apart from fuel consumption, reliability and ease of service. And here, in the looks department, the Saluto isn’t bad looking, but can only be described as an ‘ok looking’ bike.

Paint quality is rich, and overall build quality is commendable; this is where the Saluto scores, be it the quality of the switchgear, blacked out finish on the engine, the body graphics and even the finish on the fender and side panels. The design on the clocks could have been better executed though, and if you look at the competition’s, the Saluto’s instrument panel seems like the only low point of the bike’s features. It just fails to impress.

The Saluto may not be high on features, but what is noteworthy is its engine. The bike is powered by an all-new 125cc, single-cylinder, air-cooled unit. That means it’s not borrowed or upgraded from any of Yamaha India’s previous 125cc bikes. The new engine displaces marginally more than either the SS 125 or the YBR 125’s 123cc engine, but looking at the numbers, the Saluto’s engine makes marginally less power of 8.3PS of power at 7000rpm. But the torque kicks in earlier, so there’s a sense of pull without opening the throttle as much as other 125cc bikes – the maximum torque of 10.1Nm kicks in at 4500rpm. That makes the Saluto feel eager to lunge ahead in traffic; there’s no need to open the throttle wide open. On a closed road, the bike managed to nudge past a speedo indicated 90kmph even with a pillion on board, and riding solo, 100kmph comes in without any major protest from the engine.

However, it’s not performance which this 125cc engine has been designed for. Developed with Yamaha’s Blue Core philosophy – which employs lighter parts and components to reduce friction – this engine has been developed to offer fuel economy and refinement, which it does. The Saluto claims an ARAI certified 78kmpl, which we assume will translate to about 60-62kmpl in the real world. But the real takeaway is the refinement and vibe-free nature of this engine, at least in respectable city speeds. For a 125cc, the Saluto’s engine pulls cleanly and without much protest in terms of vibrations or a clunky gearbox. The four-speed ‘box is adequate for city commuting and the gears slot in precisely. A fifth gear is missed though and the Saluto demonstrated willingness for some more top-end performance, even though that is not 125cc bikes are designed for in the first place.

For a 125cc commuter bike, the Saluto ticks all the right boxes with a comfortable ride and friendly, relaxed ergonomics. The suspension – telescopic fork at the front and rear swingarm shocks – is firm and does a good job of damping out undulations and small potholes. Even over broken roads, the suspension soaks up bumps quite impressively. In fact, standing up on the pegs, the Saluto sailed through a broken patch without losing its line or composure, even though that’s not what it’s designed to do.

In traffic and in usual urban conditions, the Saluto’s chassis displays willingness to change directions quickly and with composure. We even managed to lean the bike over a fair bit into a corner and the combination of the chassis and the suspension is remarkable, providing sure footedness and confidence in the bike’s agility. At 112kg, the Saluto is one of the lightest bikes in the 125cc segment, and combined with a taut chassis and refined engine, it makes for an impressive ride, even with a pillion. Braking is adequate, but the lack of a front disc brake, even as an option, is disappointing.

Yamaha’s new 125cc bike Saluto is certainly a commendable attempt to offer a quality product. And at Rs 52,000 (ex-showroom Delhi), it is well priced for the 125cc segment. Sure, it’s got a smooth, refined engine, good build quality and sorted ride. But the lack of a disc brake, and ‘not-so-premium’ looks do take away a lot of its positives.

In the end, it depends how well Yamaha markets the Saluto. Because to score in the 125cc segment, the Saluto needs to take on established rivals like the popular Honda CB Shine and the Bajaj Discover 125M. And don’t forget, the CB Shine is Honda’s largest selling motorcycle in the world. And that means the Saluto has quite a job cut out for it, and as a first, a disc brake option is a must.