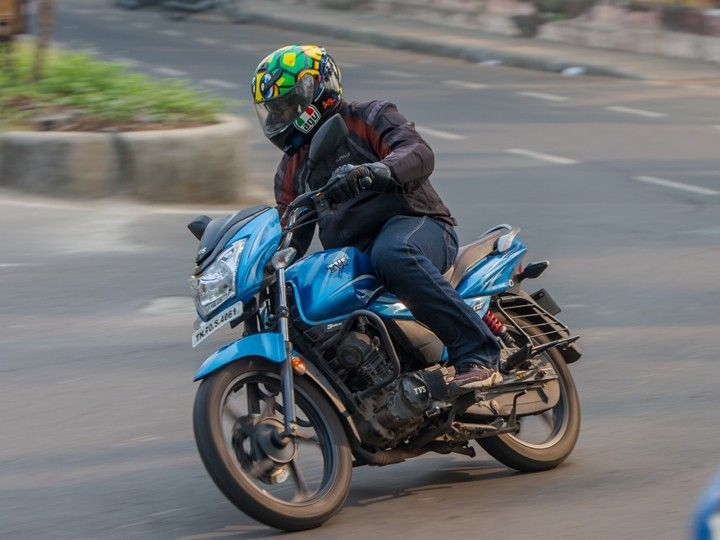 With my colleague Alshaar making the Honda Navi his new long termer, the TVS Victor was up for grabs. Now being a commuter bike, the ZigWheels boys weren’t scuffling among themselves to snatch its keys. The total distance from my residence to office and back is almost 50km, most of which through is dense traffic. Hence, the Victor sufficed both my needs of frugality and agility which meant I was more than happy to make it my new long termer. The TVS Victor is pleasing on the eyes, especially with the blue shade that was on our long term bike. The only bummer is the fact that it looks almost identical to the Star City+.

I really liked the upright and comfortable riding posture while the long saddle means that the pillion rider is also happy. The Victor is powered by a 3-valve, 110cc motor pushing out 9.6PS and 9.4Nm of peak torque. The engine feels peppy for city riding and refinement of the motor is also good. There is good low-end torque which means one can crawl through city traffic in second gear also. The 4-speed gearbox though can feel notchy at times. The TVS Victor employs a semi-digital instrument console that boasts an analogue tachometer. The display is loaded with details like fuel gauge, service indicator, two trip meters and odometer. It also gets eco and power mode indicator which is useful to extract good mileage from the motor.

Talking of which, the Victor returned an impressive 55kmpl overall despite spending most of its time commuting in the crawling traffic. It also feels quick on its feet and direction changes are effortless; a boon while riding in Mumbai traffic. The soft suspension setup also means that you can ride over potholes and undulations without any worry and the Victor’s ride quality is among the best in its segment.