Besides being better for the environment, has TVS improved its flagship naked? 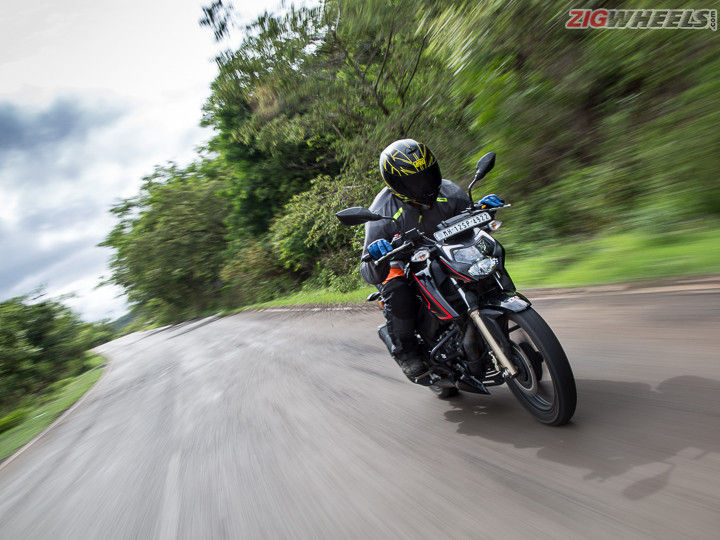 One of our primary concerns with the transition to BS6 was that with emission norms getting more stringent, performance levels were bound to take a hit. But did becoming cleaner and environmentally friendly come at the expense of excitement? Thankfully not, as it turned out after taking a short spin on the TVS Apache RTR 200 4V BS6 at the TVS test track late last year. It might have lost a bit of grunt, but it still retains that fun quotient. Now that we have got our hands on the BS6 bike at our HQ in Pune, we set about finding how the improvements have affected the overall experience.

More Miles = More Smiles
While to the naked eye, the 197.75cc single-cylinder engine may seem the same, TVS has heavily reworked the internals of the engine. It gets new asymmetrical piston rings, a new intake system, revised valve timings and a new exhaust manifold (that obviously includes the rather chunky cat-con that we see on every BS6 bike).

No longer is the fuel fed to the motor via a carburettor. Instead, the engine gets a new fuel injection system. TVS used to make a fuel-injected version of the RTR 200 4V earlier but only sold a handful of units before discontinuing it right about the time it became mandatory for bikes above 125cc to get ABS. TVS claims that this new system, called Race Tuned-Fuel injection (RT-Fi), is a better tune than the previous one. Better and precise fueling has led to the BS6 engine breathing and combusting fuel more efficiently. In our fuel efficiency tests, the BS6 RTR 200 4V delivered 50.70kmpl in the city and 42.58kmpl out on the highway, which is nearly 4kmpl and 1kmpl more than the BS4 carb bike in the respective tests.

Another factor that has led to such a massive improvement is the new reduced friction coating inside the cylinder and the gearbox. This allows the engine to run more freely, reducing energy losses.

No Change In Usable Performance

By making the necessary adjustments to meet BS6 norms, the engine has lost out marginally on torque, now putting out just 16.8Nm instead of 18.1Nm. The torque-band is wider by 500rpm though, with peak output coming in at 7500rpm. Thankfully, the engine still manages to produce 20.5PS at 8500rpm like earlier. There are no changes to the gear ratios or the final drive, the RTR 200 4V still having to make do with a 5-speed gearbox with a slip-and-assist clutch.

Off the line, there is absolutely nothing separating the old and the new RTR 200s. It is only when you start chasing triple digit speeds that the BS6 Apache starts lagging behind. It is 0.7 seconds slower to a hundred than the BS4 bike. With the improved throttle mapping, the new RTR 200 4V manages to deliver in-gear roll-on acceleration figures which are fairly close.

The engine packs a lot of grunt in the mid-range. Right from 3000rpm to around 8000rpm, there is strong pull from the motor. It is only beyond that that the power starts tapering off. But the sweet spot remains at 6000-6500rpm. TVS should have given the bike a sixth cog to aid highway cruiseability. Currently, the engine is screaming while doing 100kmph in fifth gear that appears at 7000rpm. With the additional cog, it would have made the motor less shouty and perhaps delivered much better fuel efficiency on the highway too.

There is a very slight buzz experienced at around 7000rpm, which becomes prominent at 8000rpm and stays all the way to the redline, which is just under 11,000rpm. You feel this at the pegs and the handlebars but the seat area is pretty well isolated.

GTT: Gimmick Or Actually Useful?
Part of the list of updates on the BS6 RTR 200 4V is a new feature called Glide Through Traffic or GTT. It increases the revs ever so slightly that you do not need to give any throttle input to set off the line. This reduces the risk of stalling the bike while crawling through traffic. All you need to do is slot the bike in first and disengage the clutch gently. It manages to do around 7kmph in first gear, 12kmph in second and 17kmph in third. You have got to shift smoothly and ease off the clutch. But once you are rolling, it just keeps chugging along. This is not the first time we have seen such a feature on a motorcycle as nearly all of the large capacity Suzukis sold in the BS4 era offered this feature and are likely to do so in BS6 guise as well.

There have been no changes to the split-cradle frame of the Apache RTR 200 and that is a great thing. It remains an able handler. It loves to lean over and is quick while changing directions too. The BS6 updates have increased the overall weight of the bike by 2kg, which is hardly anything extra to unsettle the Kayaba suspension units. The units are set up on the sportier side but aren’t by any means stiff.

The more delightful bit about the hardware is the use of new TVS Tyres. The front is a bias-ply Remora but the rear rubber is now a radial unit from its new range called Protorq. These tyres were developed last year in TVS’ one-make series races and having raced a few rounds in the media class, I can tell you they are quite grippy on the race track. The same can be said about its performance in the real world too. The tyres are unfazed even in wet conditions. The Protorq rear radial is optional. You can also opt for the harder Pirelli Angel CiTy tyres which aren’t as grippy but if you aren’t looking at sport riding, this should ideally last longer.

TVS has taken major strides in improving the braking performance of the RTR 200 4V. The earlier bike lacked ferocity and consistency, both of which have been solved in this iteration. And it shows as the BS6 Apache RTR 200 4V manages to stop nearly six metres shorter than the BS4 bike. One small hiccup that we continued to face with the system is the lack of lever feedback, but it isn’t a deal breaker by any sorts. We must commend the calibration of the dual-channel ABS system. The system doesn’t kick in abruptly and when it does so, it is quite subtle, never giving you that wooden feeling.

The TVS Apache RTR 200 4V has undergone plastic surgery, getting a rather edgy and angry face. While some of you might find it odd, I rather like the look. The LED eyebrows could have done with a transparent cover though. How does the LED headlight fare? Pretty good. It lights up the dimly lit roads quite well at night, providing a large field of view of the road ahead. It is certainly one of the better ones available in the lower capacity motorcycle segment.

Aside from that, you only get ‘BS6’ and ‘RT-Fi’ stickers that let you know that it is the BS6 bike, with obviously, the chunky cat-con giving it away too. The rest of the motorcycle remains the same. The Apache RTR 200 4V was always a handsome brute. But we wish TVS gave it some brighter shades like the Apache RTR 160 4V and not just black or white colour options.

Connected On The Go

TVS had already equipped the last batch of the BS4 Apache RTR 200 4Vs with its SmartXonnect Bluetooth module but we never got to test it out on the motorcycle. It might be the same module from its 125cc scooter, the NTorq 125, but there are a few additional features on the Apache. This console uses your phone’s accelerometer to measure lean angles and G-forces, which might not be the most accurate way of measuring them. Also, other than just being a feature to brag about, we couldn’t figure out the reason why you would want to know about how many G-forces you were subjected to on your ride.

Still, the turn-by-turn navigation system works well, unlike on the NTorq 125 where it used to shut off quite abruptly. You just have to leave the location settings on ‘Always On’ for the application for it to be seamless. You also get call and SMS alerts as well as few other notifications. The mobile application also stores your post ride statistics.

TVS hiked the prices of the Apache RTR 200 4V a few weeks ago, the first since its launch in late-2019. The bike now retails at Rs 1,27,500 (ex-showroom Delhi), almost Rs 13,000 more than its BS4 counterpart. For the additional moolah, you now get a motorcycle that is not only cleaner in terms of emissions but also more fuel efficient. It is almost as quick in daily runabout scenarios as the old bike but more importantly, it packs better brakes and grippier tyres. What’s more is that it now gets the SmartXonnect bluetooth module and other nifty features to enhance the ownership experience. Sounds like a good deal? We think so.