We ride the new Bonneville Bobber which is possibly one of the most beautiful motorcycles on sale globally but is it a practical option? 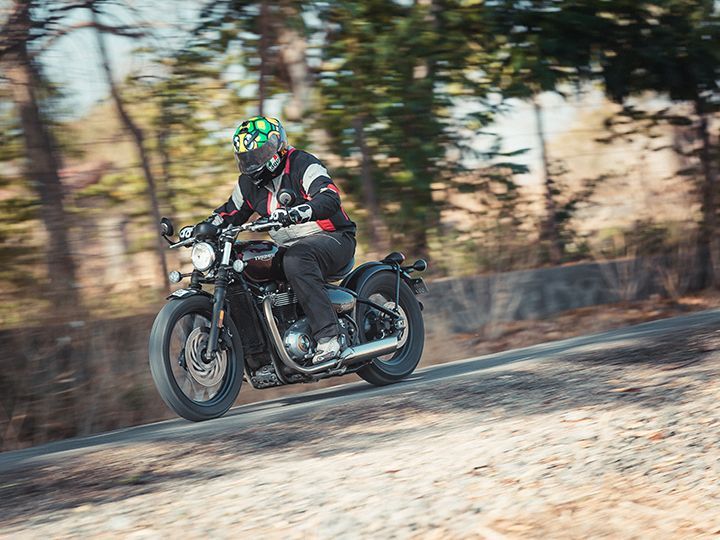 The Triumph Bonneville is among the most popular motorcycles for the British manufacturer and two years ago, the entire Bonneville lineup was overhauled. The latest entrant into the Bonneville range is the new Bobber. Along with the Thruxton R, the Bonneville Bobber is another unique offering in the new Triumph portfolio. It has been positioned as a lifestyle product - a genre of motorcycles that will appeal to the new wave of hipsters.

I was smitten by the beauty of the Bonneville Bobber ever since I first laid eyes on the bike. This feeling stayed with me right from the time I picked it up at the dealership till, with a heavy heart, I returned it. In true Bobber tradition, the British bike has been stripped of all the unwanted body panels to keep the weight as low as possible.

Despite the minimalistic bodywork, the Bonneville Bobber has a beautiful design. The one styling element that will grab your attention most is the floating saddle. The large 19-inch spoke wheels at front, shod with custom-made Avon Cobra tyres and fork gaiters endow the motorcycle with a butch stance.

Another interesting detail is the “hard-tail look” as the monoshock is neatly tucked below the saddle enhancing its retro charm. The faux carburettors, battery cover with a stainless steel strap, chopped twin exhaust mufflers, peanut shaped tank and bar-end mirrors are some of the other design highlights that add to its appeal.

The Bonneville Bobber flaunts a single-pod instrument console with a large analogue speedometer. There is a small digital screen that displays details like tachometer, gear-position indicator, trip meter, real time efficiency, range, traction control settings, power modes etc. The large switchgear is easy to use with riding gloves and reek of premium quality. The only niggle being the lack of pass switch which is replaced with a toggle switch for switching between low and high beam.

The Bonneville Bobber may hero the yard build-look but the fit and finish levels are of the first order. I like the lustrous paint finish and the fact that they have taken time to hide the ugly wiring that is common on other minimalistic designs. Triumph designers have to be lauded for their efforts as the Bonneville Bobber is among the most beautiful motorcycles on sale.

Sitting beneath the petite fuel tank is the same 1,200cc parallel-twin powerplant as seen on the Triumph Bonneville T120 and the Triumph Thruxton R cafe racer. The Bobber’s motor produces 77PS at 6,100rpm and a peak torque of 106Nm is made available at 4,000rpm. Power output though is least among the trio. The Bonneville T120’s engine delivers 80PS and 105Nm whereas the Thruxton R’s mill pumps out 97PS and 112Nm of maximum torque which is hardly noticeable in this street/city focused ride.

Before I could start my ride, I was tasked with finding the ignition keyhole. It’s located below the faux carburettor, next to the centre panel and after my experience at the showroom, I had a good laugh watching my baffled colleagues trying to solve the same problem once I reached office. Thumb the starter and the motor comes to life with a nice roar before settling down to a milder note at idle. Despite its old-school demeanour, the Triumph bike gets modern tech in the form of two power modes (road/rain) and switchable traction control. It also gets ride-by-wire technology which needs a bit of getting used to owing to its jerky behaviour at lower-revs. The clutch on the other hand is buttery smooth and can be actuated with just one finger.

Once I got used to the throttle, the Bonneville Bobber felt friendly and easy to ride at lower rpm. On the open highway, when I rolled the throttle with gutso, the bike responded enthusiastically with sprightly acceleration. As the revs build past 3,000rpm, the “High-Torque” engine (in Triumph lingo) comes into its element with a healthy surge of torque that enables it to breach the 100kmph in 4.56 seconds. But the Bobber’s performance isn’t about outright acceleration as much as it is about cruising down the highways. The bike felt at home doing speeds between 110-120kmph with just minor vibes through the handle bars. On an open stretch, we managed to clock a top speed of 157.5kmph. But the significant amount of wind blast above 120kmph means one has to hang on to the bars to fight the wind.

What adds to the Bobber’s performance at higher speeds is the deep, throaty exhaust note higher up the powerband and the growl, as you blip the throttle while downshifting. It’s addictive. I was in the “road mode” most of the time, while the “rain mode” offers milder acceleration and comes handy in wet and low grip conditions. The engine heat was bearable on the highway but in crawling city traffic, the fans were working overtime to keep the motor cool but as with most unfaired bikes the hot air is directed towards the rider's leg instead of being pushed away from it. Having said that, the heat was tolerable and it never got scalding.

Swing a leg over the saddle and the first thing that you notice is the low saddle height. The riding posture is slightly canted forward and the padding of the saddle is on the firmer side. The Bobber isn’t a motorcycle that you would like to go touring. After my 100km run on the highway for the fuel efficiency run, my back and shoulders were hurting a bit. A unique feature of the Triumph Bonneville Bobber is that the saddle is moveable (with tools) so that the rider can adjust the riding posture based on his preference. Our test bike was fitted with optional bar-end mirrors that, to my surprise, offered great rear view visibility. Even at triple-digit speeds, they were firm and didn’t shift.

The Triumph Bonneville Bobber employs the same twin-tubular frame as seen on the Bonneville T100 but has a considerably longer wheelbase and a slightly more relaxed steering angle which endows the bike with good stability at higher speeds. In terms of cornering performance, the bike feels a bit lazy and front heavy. The tradeoff here is the stability and how the bike holds its line through the turns.

In adapting a long low stance and also trying to maintain a hard-tail look, Triumph have been forced to reduce the rear suspension travel to just 76.9mm. This means that the spring and damping rates are rather stiff. The bike gets unsettled easily on broken roads. On one occasion, I hit a small pothole at 60kmph and the jolt to my back was very harsh. In rolling city traffic, the bike felt easy to manoeuvre but when it comes to pulling a tight turn, the bike’s really wide turning radius hampers its agility.

Pushing the bike out of a parking lot also takes a lot of effort owing to its 228kg dry weight and heavy front-end. The disc brakes provide very little bite, which means one has to brake a lot earlier than normal and keep a significant distance with the vehicle in front. In our braking test, we managed to bring the bike from 80kmph to a standstill in 3.01 seconds  and the distance was 30.12m.

The Bonneville Bobber has been priced at Rs 9.09 lakh (ex-showroom, Delhi) while its sibling the T120 retails for Rs 8.80 lakh (both prices are ex-showroom, Delhi). It couldn’t have been clearer that if you want a practical, retro-classic Triumph motorcycle, the Bonneville T120 makes more sense. But not all decisions are made by mind and the Bonneville Bobber, with its gorgeous styling and the personal experience that it offers (it is only available as single-seater), is a bike that will appeal to your heart more.

Yes it does have its flaws with its stiff suspension, lack of maneuverability at slow speeds and it isn’t a bike that you will ride long distances on. But if you’re looking for an attention grabbing, well-engineered motorcycle for short breakfast rides and to potter around the cityscape in style, the Bonneville Bobber ticks the right boxes. 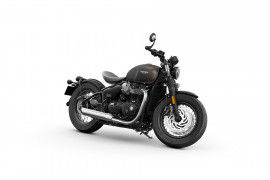 All Comparisons of Bonneville Bobber