Can the Skoda Rapid’s new torque converter fill in the big shoes of the coveted DSG? 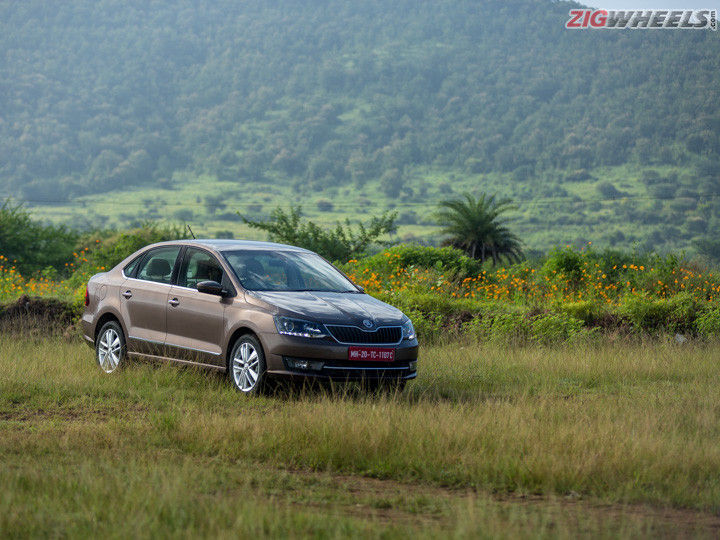 To a true blue Skoda fan, a torque converter with the Skoda Rapid sounds blasphemous. With comparisons to the older DSG, this new torque converter has the pressure to deliver. And this is not even the first time the Rapid is being offered with a torque converter, but the earlier attempt with the 1.6-litre petrol motor was pretty ‘blah’. Now, paired with the 1.0-litre turbocharged motor, is this new 6-speed torque converter any good? If you’ve previously owned a DSG car, can it measure up to your impossible standards?

We did a proper road test of the facelifted Rapid when we tested the manual transmission variant. For details like features, space and comfort, check that out. Here, we will only talk about the automatic experience.

I was a bit surprised as I turned the key in the ignition slot. Yes, a key, you still do not get a push-button starter. The refinement levels of the Rapid MT that we drove recently were quite impressive and with the automatic, Skoda seems to have taken it a notch higher. The motor comes alive with barely a sound or rumble, almost like a 4-pot. In fact, start it anywhere, except for a well-insulated parking, and you'll be straining your ears to hear the sound of the three-cylinder turbo-petrol at idle. The only thing you feel inside is a mild pulse on the seat and the door if the AC is on. That too disappears as soon as you increase the revs.

Slot it into drive, lift your foot off the brake, and the Rapid darts forward. If you haven’t driven it before, you will be caught off guard. It would have been better if Skoda had turned down the initial acceleration. In normal traffic, curtailing this initial enthusiasm of the Rapid can become quite a task. Partially releasing the brake helps, but that means the get going is a bit jerky. To top that off, this strong creep of the Rapid is also a little unpredictable as it is stronger during cold starts, but smooth if you are not coming to a complete stop.

The primary job of any automatic is to go through the gears smoothly, and this new torque converter is adept at that job. It can shift up without any noticeable lag and even the downshifts between the higher gears are masked well. However, in the initial gears like going from third to first, the shifts are more noticeable and can be felt inside the cabin. If you slot the transmission into Sport, the downshifts become more aggressive as the gearbox is holding on the revs much longer. And because the rev matching isn't seamless, they feel a tad bit uncomfortable.

It’s a character we feel has been passed down from the DSG. When you start pushing the car and shift up at the redline, the shifts feel a little slow. But slow, only in comparison with the DSG. Compare it with any other torque converter in this price bracket, and the shift times would still be among the fastest. Another interesting characteristic of this gearbox is that it keeps you in the powerband all the time. That means holding on to the revs a bit longer. It will only upshift when it's sure the next gear will still have the grunt to pull a quick overtake. As a result, there’s always enough power to keep moving forward at a quick pace. But because of this nature, the engine never feels fully relaxed, even while cruising at low speeds on an empty road. The other thing I found to be a little annoying is that there is very little engine braking. Get off the throttle in the city and it goes into coasting mode. While this does save fuel, there is an annoying lag between getting back on power and the power reaching the wheels. It's because of these aspects that the Rapid doesn't feel as seamless as the competition with CVTs or DCTs in daily commutes.

This transmission feels more relaxed on the highway than it does in the city, where it's always shifting to keep you in the powerband. However, at speeds of around 75-80kmph, it keeps dilly-dallying between fifth and sixth gear. But you hardly notice it as the shifts are quite smooth. The plus side here, like it was inside the city, is that you always have enough grunt for a quick overtake. However, highway driving at 100kmph in sixth gear feels smooth with the engine ticking over at 2000rpms.

What Do The Numbers Say?

The Rapid AT managed to do the 0-100kmph run in just 10.7 seconds and a kickdown acceleration test from 20-80kmph in just 6.59 seconds. Compared to the manual transmission, the sprint to 100kmph was less than a second slower. That can be attributed to the Rapid AT not having an aggressive launch off the line. As far as kickdown times go, the Rapid AT was more than a second faster when you compare it to the Hyundai Verna 1.0-litre turbo-petrol with the dual-clutch transmission.

The Rapid AT proved to be slightly more efficient than the Rapid MT on the highway and even more so in the city. Surprised? We were too. Looks like Skoda has tinkered with the gearing of the Rapid AT to aid efficiency.

To sum it up, I am surprised. We were curious to find out what this torque converter was capable of doing and the Rapid AT definitely ended up setting some standards. Yes, it has its niggles like the lurchy start or the jerky downshifts, which take away from the Rapid AT’s city commute abilities. But if you prefer performance over smoothness, it won’t bother you much.

The cons ask you to adapt to the Rapid AT but it's something you will end up doing in a day or two. The learning curve isn’t steep at all.

It is for this reason that we have come to this conclusion. The Rapid AT is a great option if you undertake highway journeys often and rate performance over outright smoothness. However, if you want a car that does well in the city and can on some occasions shine on the highway as well, you have other options such as the Honda City and the Hyundai Verna that you can look at.