The Jeep Compass Trailhawk is finally here with a 9-speed automatic and new off-road cred. But is it the comfortable automatic diesel option that most of you were looking for? 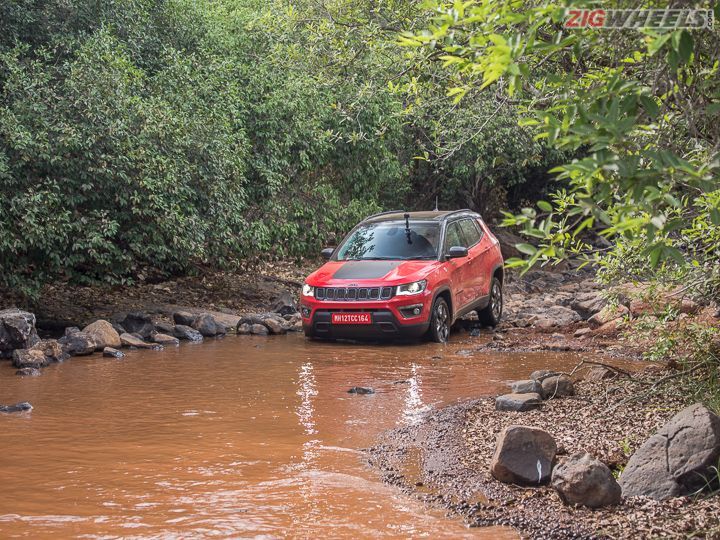 Jeep has finally revealed the new Compass Trailhawk, an SUV that can venture further off-road than any Compass before it. It also adds in the convenience of a 9-speed automatic and the bonus of a BS6 compliant engine as well. We know there’s been a lot of attention surrounding this particular version of the Compass, especially since its the first diesel-powered Compass to come with an automatic gearbox. So is this the Jeep that most of you have been waiting for? Well, there’s good news and bad, so read on to find out.

Trail Rated 4x4
Jeep doesn’t just add that ‘Trail Rated 4x4’ badge on the quarter panels of just any SUV and so the Trailhawk has gone through a strict certification process that covers five aspects of off-roading - traction, ground clearance, articulation, maneuverability and water crossing ability - and only once the Trailhawk passed these tests did it receive the coveted stamp of approval.

Let's start with the bumpers, and Jeep has shaved off both the front and rear bumpers to improve both the approach and departure angles. These now stand at 26.5 degrees at the front and 31.6 degrees at the rear. Brakeover angle, which dictates the size of obstacles that an off-roaded can climb over, has also increased to 21.2 degrees. Meanwhile, ground clearance has been increased by 27mm (205mm).

Water wading depth has also increased to 480mm and this has been helped by raising the height of the intake snorkel by 120mm. The first two slats on the right side have also been blanked out to help protect the air intake from any bow wave generated by wading too fast through deep puddles.

In the traction department, we see the alloy wheels going down one size to 17 inches. But Jeep have specifically chosen this tyre-wheel combination to give the best possible performanceoff road. Even down to developing a special tyre with Falken and using a slightly narrower rim as well to allow the tyre walls to bulge outwards and further protect the rims.

Jeeps has also protected the underbody of the Compass Trailhawk by adding high strength steel plates to cover the underside of the cooling module, engine and transmission and oil pansfront suspension struts and the fuel tank.

One of the key components to the Trailwahk’s new found abilities is actually the 9-speed gearbox itself. Equipped with lower and closer low and mid ratios, the Compass is able to tackle very steep inclines and rocky terrain without the addition of a low ratio transfer case. Instead, 1st gear is super low and only engageable when you select 4WD Low mode on the drive selector knob. This locks the transmission in first, which has a very low crawl ratio of 20:1 and this is used to get up steep slopes and over rocky terrain. In all other situations, the Trailhawk operates only in the upper eight speeds of the gearbox.

Other additions include hill descent control which manages both the front and rear brakes while going down a slope and allows the vehicle to descend with just his/her hands on the steering wheel. New off-road modes include a 4WD Lock Mode that minimises wheel spin in the different drive modes and ‘Rock’ mode that sends more power to the rear differential to allow the Compass to lift it’s wheels over really challenging obstacles like rocks and deep ditches.

What else has changed?
On the outside, you would be hard pressed to recognise the changes to the Jeep Compass. To start with, the seven slat grille features matte black accents compared to the chrome accents on other variants. There is also a matte black decal added to the bonnet that Jeep says cuts glare off the bonnet, but it does add a nice custom look to the SUV. You’ll really have to look closely to notice the new redesigned bumper.

On the side, the only change is 17-inch alloys with a slightly different pattern and colour combination compared to the eighteen inchers in the Limited Plus variant. At the rear, you have a Trailhawk badging, the Jeep logo and a revised rear bumper. You’ll also notice that the Trailhawk gets a bright red tail hook set against that contrasting black bumper. This is another addition to the Trailhawk that will help in pulling the Compass out of a sticky situation while out on the trail. The international variants get toe hooks in the front as well but owing to stricter pedestrian protection norms in India, it misses out on those. Like the rest of the Trailhawk, this toe hook is also hardcore and is engineered to carry over 1.5 times the weight of the Compass.

On the inside, you will find plenty of red accents around the all-black cabin. It also gets the Trailhawk logo embroidered in the seat covers. Other changes are similar to the Limited Plus in that you get the 8.4-inch Uconnect infotainment system with a new, more precise navigation app as well. The multi-info display (MID) has also been updated and it now shows additional info like engine temp, oil temp and even the level of the AdBlue. Another welcome feature is cruise control that now finally fills up the blanks on the steering wheel.

But there are some features missing too like electrically adjustable driver seat with memory function that’s offered on the Limited Plus variant. The auto headlamps and auto wipers have also been deleted from the feature list.

And the result of these changes?
We had done a little off-roading in the standard 4x4 Jeep Compass and while we found it very capable over green lanes and some pretty gnarly jungle paths, we missed a proper low ratio mode to get it over the steepest of slopes and rockiest of terrain. And from our quite extensive excursion on an off-road trail we can say that while they haven’t gone the whole nine yards and given us a low ratio transfer case, this low 1st gear ‘hack’ really does work. There were some seriously steep inclines and big rocky pits on our route that the Trailhawk made short work of. Yes, it may not be as capable as a true blue off-road machine like the Wrangler or even the Force Gurkha for example, but it does manage a very nice balance between off-road abilities and road based SUV comfort.

When it comes to the suspension, the Compass retains the same FSD (Frequency Selective Damping) all-independent setup it had before. Ride quality is comfortable and the suspension remains fairly quiet over most of our broken tarmac. However, it does struggle to keep smaller imperfections out of the cabin at city speeds. As the pace increases though, you will realise that the Compass can handle practically anything without complaint.

The Jeep Compass Trailhawk features the same 2.0-litre Multijet diesel engine as other variants. But this one is now BS6 compliant. And what's more, it will run fine on BS4 fuel till the new BS6 diesel is available across the country. This also now gets an AdBlue tank that helps it clean up exhaust gasses. It's a 13-litre tank and Jeep say it should last between 7,000-9,000km.

It makes the same power and torque as before (170PS and 350Nm) but Jeep has tuned the Trailhawk for better throttle response. It also feels calmer and more refined than before and this down to both the new state of tune as well as the new transmission. The 9-speed auto, as we mentioned earlier, stays only in the top eight gears in regular usage. And like the other 9-speed transmissions we've driven before (Honda CR-V, Range Rover Evoque), it's fairly smooth when you drive in an unhurried manner. But through hilly terrain and if you get aggressive with the accelerator, it does take a second to respond. On downhill sections, it also tends to pick lower gears instead of coasting, even if it means letting revs rise to nearly 3500rpm even with no throttle input. Although there is a manual mode, there’s no sport mode. And we would have liked to see the addition of paddle shifters to give a bit more control in manual mode.

And when we did step behind the wheel of a Compass 4x4 Limited Plus which we used as a support vehicle, we were reminded of the other obvious but big advantage this 9-speed auto brings - a happy left leg which doesn’t have to operate a heavy clutch pedal anymore.

Verdict
From our experience on the trails, we can say that the Jeep Compass Trailhawk really is quite the capable off-road machine. The low ratio, better approach and departure angles, raised ground clearance and tweaks to the 4x4 drivetrain have made a big difference to how far it can venture off the beaten path. But is the new 9-speed gearbox the automatic solution some of you have been hoping for in the diesel Compass? Jeep has priced the Compass at Rs 26.8 lakh nationwide and this means the Jeep Compass Trailhawk banks a lot on its off-road credentials to appeal to enthusiasts. If you plan to do a lot of off-roading or even just like to take road trips across the subcontinent, the Trailhawk could be a great option.

But if you plan to spend a majority of your time in an urban environment, then there are other diesel automatic SUVs out there like the Tucson and or even the Creta automatic that may make better sense. Jeep says that it is working on getting the 9-speed automatic to the rest of the diesel Compass range, including the 4x2 variants as well. But for that to happen, you will have to wait a little longer.