Hero is pitching the new Xtreme 200R at the practical end of the 200cc category. But is that a good enough proposition in this segment? 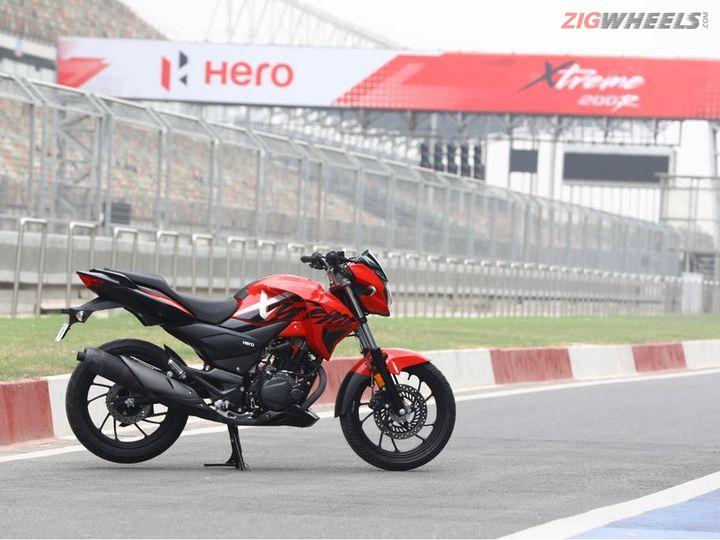 It’s been quite a while since the name Hero MotoCorp has been associated with performance bikes. Sure, they were responsible for some enthusiast favourites such as the original CBZ and Karizma, but of late, these have evolved into irrelevant machines, with the company focussing its efforts on revamping its commuter lineup. But Hero promised us last year that 2018 would be the year when larger engine capacities would get some much-needed attention. And at the start of the year, they showed off the production version of the Xtreme 200R. But as Hero says, the 200R isn’t about outright performance but a fun riding experience along with a healthy dose of practicality. So that would make the Buddh International Circuit the last place to test this bike right? Well, not quite.

Is it fast at least?

Right off the bat, this is the least powerful motor in the 200cc segment. Using the Achiever 150’s block as a base, Hero has put in enough work for the Xtreme’s motor to classify as brand new. It runs a short-stroke configuration and is fairly free revving, but doesn’t feel as quick to spin up as the Apache RTR 200 4V or Pulsar NS200. Sure, 18.4PS coming in at 8000rpm coupled with 17.1Nm of torque at 6500rpm isn’t too bad for a 199.6cc single-cylinder air-cooled motor with a 2-valve head that’s fuelling through a carburettor. But its competition is doing a lot more - 4-valves, optional fuel-injection, oil-cooling, liquid-cooling - and that helps them play in the 20-plus PS territory.

But Hero says that the 200R isn’t meant to play in this segment, not directly at least. The 2-valve setup sacrifices a screamy top-end for a strong mid-range. The pull from 5000rpm is relentless and you’re better off short-shifting at 9000rpm rather than trying to pull the engine to its soft-limiter which kicks in at about 10,500rpm. So while the straight line performance won’t blow your mind, it feels reasonably quick. That said, you’ll rarely realise how fast you’re moving until you look down at the speedometer as the motor feels extremely smooth. In the end, it’s all about practical performance.

It’s the strong mid-range pull that makes the Xtreme 200R so good to ride. While second and third sectors of the Buddh International Circuit (where we were riding) isn’t the ideal place to test this aspect of the motorcycle, there was a good indication about just how well it will behave in real-world conditions, where it’s all about usable power in the mid-range. On the track, it was pretty much 5th gear throughout, except for the short-loop connection, which saw us shifting down to third. But with even with the bike in fifth, rarely was there a lack of grunt from the motor. We really can’t wait to ride this bike on the road, where we believe it’s going to be genuinely fun.

Does it feel sporty when you get on?

Not so much. Yes, the seating stance is on the sportier side, with rear-set footpegs and a slightly low-set handlebar. But it doesn’t feel too committed a posture. It’s something that will feel great for the daily commute and will be just as at home on a quick jaunt over a twisty mountain road. Plus the 790mm saddle height is low enough to put short riders at ease, while the contoured single-piece seat is accommodating enough for riders of all sizes. That said, the handlebar is a bit on the narrower side - a little wider would’ve been perfect.

Does it handle well?

The Xtreme 200R is built around an all-new frame, though the architecture is similar to what we’ve seen on other Hero bikes so far. As for the suspension setup, it gets conventional forks up front, but at 37mm dia, they’re the fattest on any Hero bike till date. At the back, there’s a seven-step adjustable monoshock - the first, well actually second for Hero’s motorcycle if you count the Impulse. It all comes together in a very neutral handling package that’s easy to flick, no doubt helped by the short(ish) 1335mm wheelbase and a switch to 17-inch wheels (a welcome change from Hero’s 18-inch fare). But it doesn’t feel super-sharp to turn like the Apache RTR 200. The progressive nature of the handling will definitely make things easier for lesser experienced riders, but there’s enough ability here to delight even experienced ones.

And there’s plenty of stability here too. The Xtreme 200R runs on MRF rubber - a Zapper 100/80 bias ply at the front and a REVZ 130/70 radial at the back, and these tyres are no doubt up to the mark. Even taking the switchback of Turn 6 and 7 at BIC with the throttle pinned in 5th gear, the bike changed direction effortlessly, with no sign of wallowing or skittishness. Sure, the peg feelers did grind through a few of the corners. But even dragging the pegs, sometimes hard, wasn’t enough to upset the 200R’s orientation. The suspension setup feels quite spot on and sophisticated. While there was no place where we could really see how it felt over bumps, a few times when I ran the bike over the curbs, it felt well settled.

During our ride, there was only one place where we tested the brakes, and that was braking into the short-loop connection - just before BIC’s last corner (Turn 15). The 200R gets a 276mm disc at the front and a 220mm disc at the rear, with ABS as standard (in India at least). Bite from the brakes is pretty decent, and so is the feel. But we’d rather reserve our judgement on them based on how they perform in the real world.

But does it look the part?

Well… not quite. While the tank is well sculpted and gets chunky tank shrouds (which look a little too large in our opinion), the high mounted bikini fairing gives the Xtreme 200R the distinct demeanour of a commuter motorcycle. Same goes for the long straight exhaust that looks like it belonged on a bike from a decade ago, and the simple front fender which is as generic as it gets. There are some nice design details here though, such as the tail panel which is chunky in the middle and tapers off into a sharp point at the back. The LED tail light looks interesting and modern.

But modern isn’t something you can say about the instrument cluster though. It’s not bad looking by any means and features an analogue tachometer next to a blue-backlit digital display. But the silver surround feels a bit tacky and the instrumentation misses out on a gear position indicator. The quality of the switchgear does need a special mention though. Not because it’s exceptional, but because it’s definitely an improvement over the very basic switchgear that we’ve experienced on other Hero bikes. That said, the choke knob next to the horn does look rather out of place.

If you directly compare the Xtreme 200R to other 200cc motorcycles such as the Pulsar NS200 and Apache RTR 200 4V, then no doubt you’ll be a little disappointed. The Bajaj and TVS have a razor sharp focus on performance which the Xtreme simply doesn’t. But that was the exact intention that Hero had with the Xtreme - to make a usable 200cc machine that provides enough real-world performance without sacrificing on any aspect of practicality. Think of this bike as a more powerful version of the sporty, yet practical 160cc bikes such as the Suzuki Gixxer and Honda CB160 Hornet. And the pricing, though not out yet, should reflect that as well. We estimate about Rs 90,000 (ex-showroom), which would put it in the upper bracket of the 160s, but well below the 200s. If Hero can nail pricing in that range, then we believe the Xtreme 200S can carve a nice niche for itself. But it remains to be seen if that’s a niche that the junta actually wants.